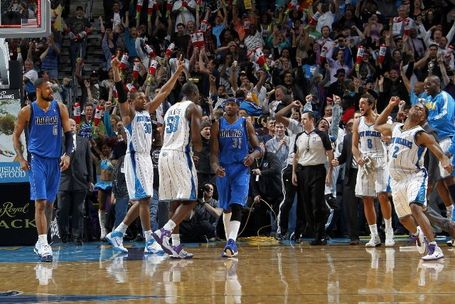 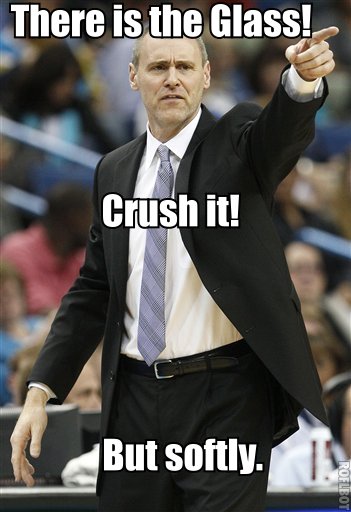 (On the Hornets) "Hey, look, they had to make every play to win the game and they did. They threw in a halfcourt shot at halftime, they had another shot that was a hair from counting at the end of the third quarter and, you know, those are plays that keep you in games."

(On the Mavs losing while Paul was out) "Soft."

(If Tyson makes his fts, or Kidd doesn't foul...) "If Cows were Kittens, there'd be a milk shortage. That's a 2005 reference, for all you history freaks." 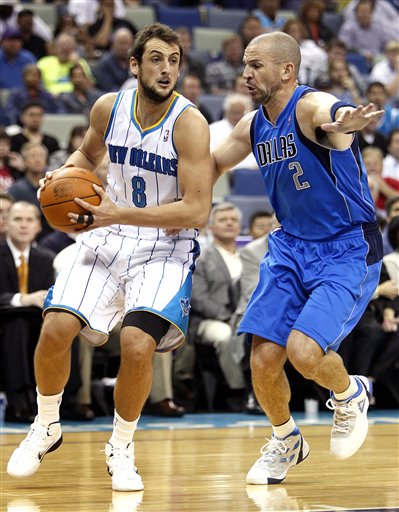 (On fouling Jack) "If we make free throws or get a stop, the game is over. I felt that Jack was going to shoot the three, so I tried to crowd him. But he did a good job of drawing the foul. As a defender, you don’t think you fouled, but they called it and it was a smart play on his part. But at the same point, we had eight seconds left and came up short." 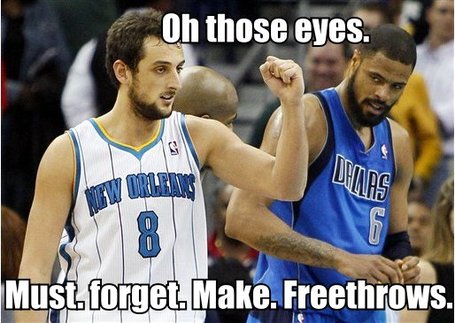 (On the Loss) "Every game you want to win, regardless of what the lineup is out there. This is a disappointing loss regardless of Paul’s absence."

(On his ankle) "I felt good out there. I was moving around pretty well. At first, obviously, when you go out there you’re a little hesitant. But I moved around, felt good and I was able to get in the flow of the game."

(on Carlisle saying soft) "I wouldn't go that far." 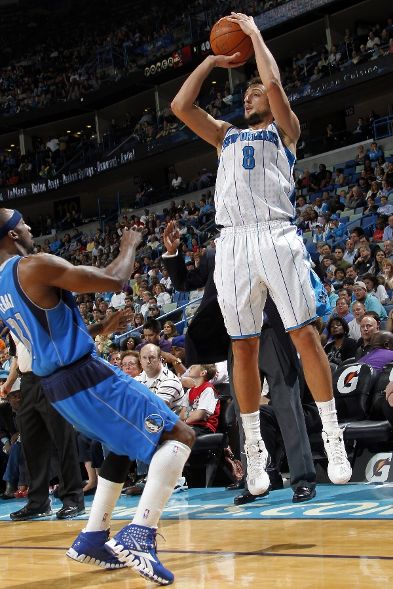 (On soft drinks) "Who said that? I'm not soft, not me. I don't know where that comes from, but we ain't soft. We have to see how he meant soft in that aspect, but I know he wasn't talking to me personally or any of my teammates because I don't think none of these guys are soft."

(Please put your foot in your mouth) "I don't know if Jarrett Jack gets that call. We know Kevin Durant does. You know Kobe may get it. But, I don't know about Jarrett Jack. That's just my personal opinion. So, we've got to live with it, take it on the chin and go ahead and get ready to get this next one." 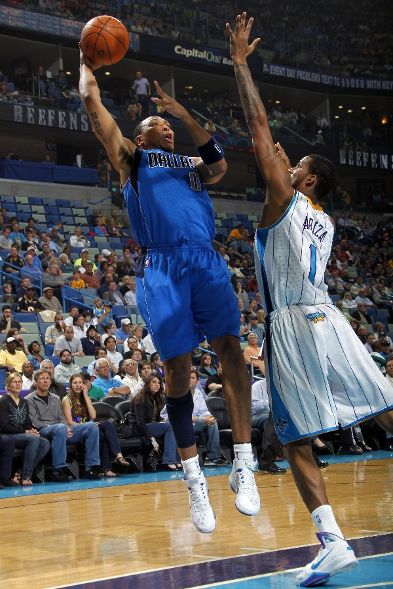 "With the fadeaway tomahawk dunk."

(On the flagrant from Sly leading to his injury) "I just kinda hit a spot where I was tender at already. So, I’ll be alright. I just fell into a knee or a camera on the baseline and it hit directly into my rib cage. It’s real tender, but I’ll be alright." 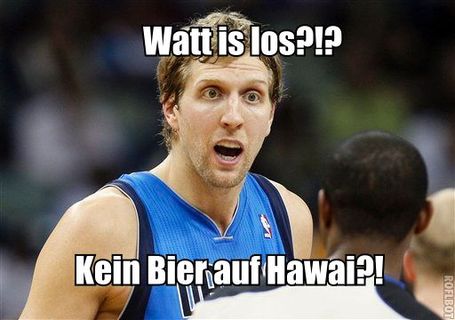 (On the finish) "Just bad, bad execution down the stretch. We’ve just got to find a way to make it happen. The last possession is a play that we’ve ran before. I come off a double screen, they knew it was coming and they switched and denied me and I had to make another play off the dribble, which is really not what we wanted. But it should’ve never come down to that."

(On moving forward) "We’ve just to keep on plugging and we’ll see what happens next time. The last three weeks or whatever we’ve lost three games, all of them by one point, so that really stinks. But hey, I guess we did a nice job in the other 19 of closing out and winning, so sometimes you’re just gonna get the short end of the stick. They’re tough, they sting, but you just can’t win them all in this league. /Durant" 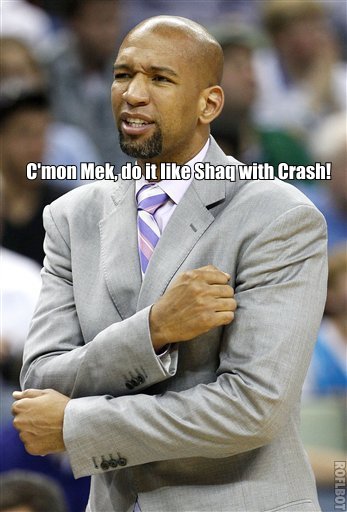 (On defending Dirk's last Shot) "You know, Mek was in that huddle and wanted to be perfect on the floor and he knew Dirk was going to come out and somebody was going to be on him. To be able to keep your balance on a guy that can shoot from anywhere, you can contest a shot and mke him shoot in the air like that, it says a lot about Okafor’s ability to do things away from the basket."

(On the Win) "I don't think anybody thought we had a chance to win tonight except the guys in that locker room. You just have to wait for your moment. We grinded it out, our moment came, and our guys made plays."

(On missing Paul) "I just know they are going to evaluate him every day. You don’t want to mess with someone’s brain. It’s one of those things that they don’t want to mess around with, and I don’t blame them. You just roll with it. Obviously we want him back on the floor, but at the same time you never want to put pressure on a guy to get on the floor before he should. As long as his future is ok and he can deal with life outside of basketball, that’s what I care about.’’

(On Jack's 3 FTs) “He steps up and knocks down three free throws after being iced after the second one. That's what i want." (On Kidd's foul) "Basically, the play was drawn up for me, throw it it, try to get a flash and a look at a 3. I saw (Kidd) kind of close in on my, so I could swipe under his arm. I got the call and was able to go to the free-throw line and knock down the free-throws. You can’t put any added pressure on yourself. You know your situation when you walk up there on the line. And the thing coach always preaches is to go back to your fundamentals. And that’s what I did. Just go through my normal routine, make sure my knees are bent, get my elbow under the ball. I’m a pretty good shooter. I thought I had a good shot at it."

(On himself) "I think I've shown over my time in this league I'm a pretty capable player that can step in and fill in when something's necessary. I got here just off of hard work. I know I'm not the most talented, biggest, fastest, quickest or whatever, but I know I'm going to go out there and give it my all every time."

Dallas has now lost two games recently that looked like locks late (they blew a late lead vs. Memphis back on Sunday night). Is that just overdue regression to the mean for a team that's overperfomed in close games for a couple of seasons? Or, was it really bad luck for a team that has actually solved much of the late game riddle?

I'd like to say time will tell. But, separating "clutch" from "random" has been an issue in all sports going back to the beginnings of the stathead days. Sometimes it feels like we're moving away from a solution rather than toward one. I'm not going to pretend I have any answers regarding tonight's wild finishes. More data points. Great entertainment.

It was an implausible victory, but the Hornets did it through excellent rebounding, solid defense and a bunch of equally implausible made shots. Yet for much of the game it seemed unlikely that the Hornets would be able to get over the hump. Every time the Hornets got close the Mavs would push the lead back to 6 or 8 points. On the other hand, despite the Mavericks pushing the lead to double digits on a couple of occasions, the deficit was never unmanageable.

At one point it looked like the speedy guard duo of J.J. Barea and Rodrique Beaubois might be the Hornets downfall. They were both using their speed to get by the Hornets defense, and they were hitting shots. But Beaubois started indulging in shotjackery and silly fouls, and Barea ended up turning over the ball 5 times in just 19 minutes.

Wednesday night’s game wasn’t a spectacular failure on either end of the court, but it was an occasion where Dallas ceded too much ground in every regard to a rudderless team.

Haywood bricked 3 of 5 from the line. Celebration for our third-best Center, Beaches! [nsfw]

Chandler even bricked 4 of 12. ugh 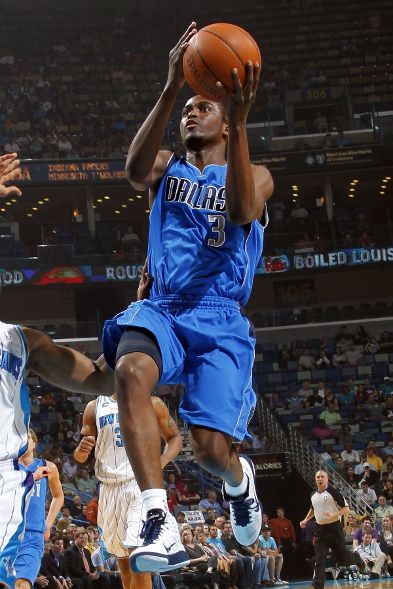 "It's not shotjackery when it's a layup, right?"

Disclaimer: If you couldn't tell by now, all italic sentences are made up thoughts, not actual quotes. Also, breaking news, the Mavs forgot (again and again) to tie their shoelaces backwards and are subsequently on a 1 Game Losing streak.

The Mavs (beat/lost to) [the New Orleans Hornets]¹ tonight (thanks to/despite) Dirk’s Awesomeness in the first 47 Minutes. The (cloud in the silver lining/major culprit) once more as usual was the late lack of support from his team-mates, with the exception of Tyson Chandler/ason Kidd². Especially useless was Jason Terry/Brian Cardinal/Deshawn Stevenson/Jose Barea/Shawn Marion/Brendan Haywood/Rodrigue Beaubois³ and it is (GUESS WHAT) THEY’RE ALMOST NOT ALL USELESS!