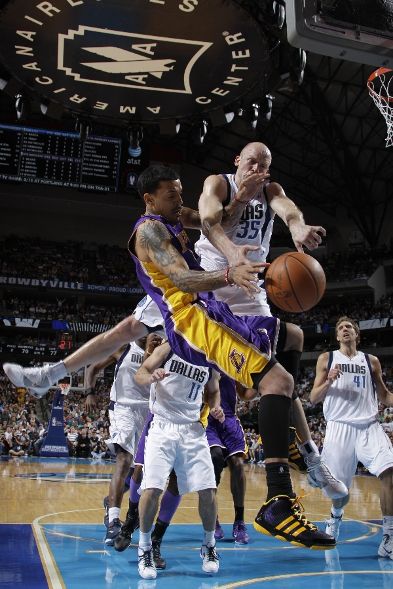 "Talk to the hand if you want that ball." 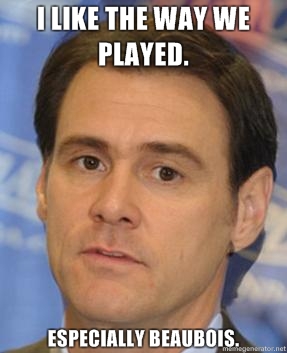 (On the Loss) "It was a tough loss because the game obviously had meaning."

(On the Percentages) "It was an inopportune time to have a bad-shooting night. A lot of shots we normally knock down didn’t fall. As we worked to climb back into it, every time we were right there, we just never got to the hump."

(On the defense) "We held them to under 45% and actually had more 2nd-chance points than they did, which speaks to our effort and the way we stayed after it. It was just an uphill battle all night long." 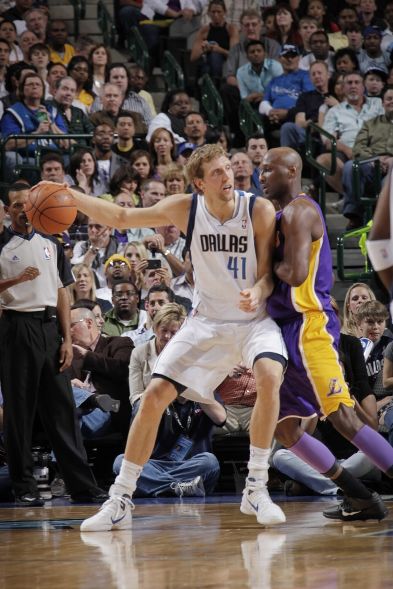 (On the Matchup issues with RGB) "It's tough. You obviously don't want to start him [Beaubois] on Kobe. But, if you start Roddy that's what you have to do because Roddy certainly can't muscle with Artest. So, you either go a little bigger and not start Roddy, or you start Roddy and J-Kidd has to guard Artest. So, that's the bind you're in."

(On the Game) "Bynum was a monster in the middle, but if you told me before the game that Kobe would only have 16 on a bad shooting night then I think we would take our chances."

(On the 4th) "Just couldn’t get over the hump. I think we really lost the game at the beginning the fourth when Kobe wasn’t even in and we just couldn’t get any stops. They kept pushing the lead with him out of the game."

(On the Lakers) "They’re one of the longest teams in the league and that’s their advantage. I think we did a decent job of keeping them off the glass, but they’re still long in there and they still had plenty of opportunities near the basket. That’s why they’re back-to-back champions, because they’re long and the bigs play off of each other, and not because of anybody else."

(On the Mavs) "We’ve already beat some of the best teams in the league, we beat the Lakers before a couple of months ago, so I don’t think we have to hide from anybody. We can beat anybody, we can also lose to anybody. That’s the fine line in this league and it’s gonna come down to who is playing well in the playoffs."

(On the next week) "Two big games and back-to-backs are never easy in this league, so hopefully we’re ready." 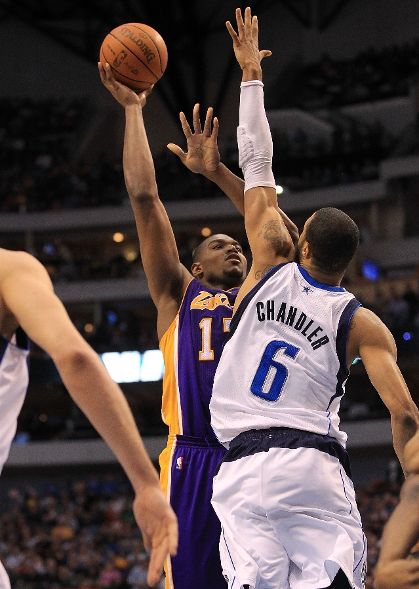 (On Bynum) "He played very well. They found him a lot. They found him in open space for him to finish. He got some offensive rebounds. He did an excellent job of putting himself in position for some key plays down there." 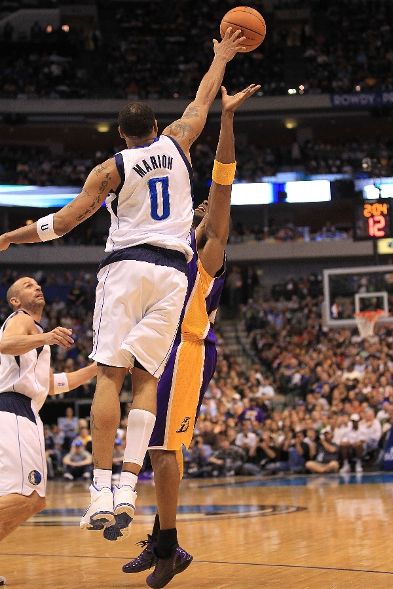 (On the Game) "I think it was a great atmosphere game, the momentum was there, but every time we got a chance to hit a big shot it seemed like we kept missing."

(On the Laker bigs) "They’re a big team, Pau Gasol and Bynum are a handful down there." 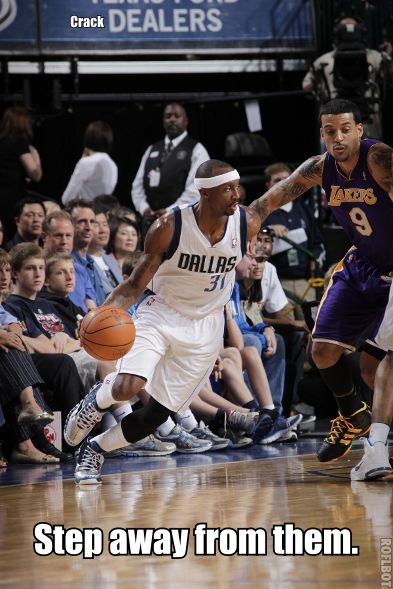 (On the Lakers) "We know that we've had success against this team, and they evened it up. We're disappointed with the outcome.

(On the Loss) "We had opportunities, but we didn’t take advantage. If we’d won this game, it wouldn’t have meant we had the title or anything. It’s a loss and we’re disappointed with the outcome, but not with the effort. They got us. We got to come back now and win the next one.’’

(On Kobe going down but the Mavs not capitalizing) "That’s when you have to take advantage. And we weren’t able to do it."

(On the Mavs O) "We had some looks there that we didn’t make. Even that last one there, I couldn’t believe that one rolled out. It was like that all night." 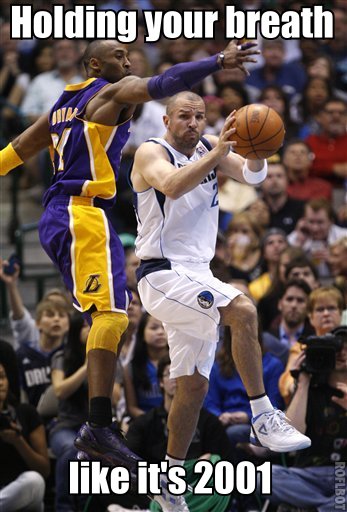 (On guarding Artest) "I was down there wrestling, I’m a little outweighed. I just tried to make it tough, but I got in foul trouble early, never got into a rhythm, but it’s a lesson learned to see what I can do a little differently not to commit those fouls. If you look at the positions, I’m a point guard guarding a small forward who is really a power forward, so, you know. I'll guard anybody and so that's the way I look at it. I got in foul trouble early, which didn't help me offensively. We just didn't get out and run." 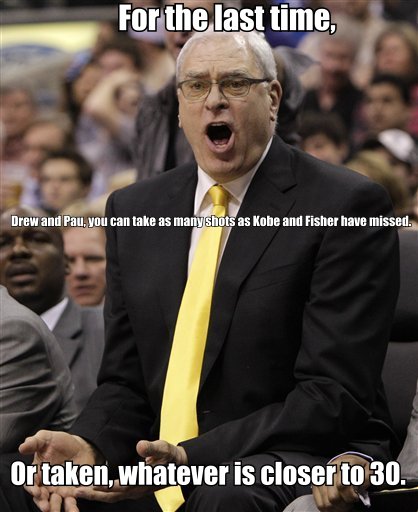 (On Bynum) "We knew that Drew was going to be effective tonight. Chandler is a great defensive player. He just doesn't have the size to contend with the size of Andrew. Andrew is a strong, powerful young man and his size is overwhelming. Drew is coming into his own."

(On the Mavs) "They have a big lineup, but he has shown before that he's a very effective player against the combination of what they put out there on the floor."

(On previews) "I don't know what's happened to the Mavs in the playoffs, but we haven't seen them. I was remarking about that today. It's kind of unusual that we haven't had the opportunity to play them. Maybe this is the year. "

(On the WWE NBA and Cuban's complaining hurting the Mavs) "In that Miami series, he definitely had it coming that time. But I think he's toned it down in the last few years. I think that Miami finals really was a tough one to swallow. I think Dwyane Wade averaged about 25 foul shots a game [actually 18.25] after the second game and you couldn't even touch him. That was really tough for Cuban to swallow and I think he understood that there's sort of a pecking order in this league and you need to keep your mouth shut at times."

(On when he had learned that lesson) "Never."

(On going inside with the ball) "We were able to get the ball in the right way and score. Bynum replaced Pau Gasol as, really, our post scorer tonight."

(On Kobe's ankle) "It's going to be a situation that we'll have to watch for a couple days. We hope he's able to play on Monday. That was severe sprain. That was a severe accident that he had out there. We'll see his recovery. He's pretty good at recovering at things like that." 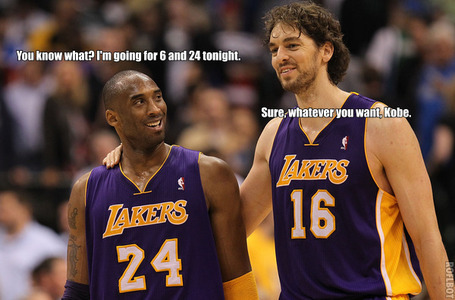 (On the game) "It was a big game. I reminded the team before we went out, I said, 'This is a team that can beat us in the postseason. For whatever reason, whenever we play Dallas it doesn’t have that same energy that we have when we play against Oklahoma, when we play against San Antonio. It’s important to understand that this team is a serious contender and that we approach this game like that."

(On his ankle injury) "I thought I was done, like done for the season. I was just praying that when I stood up my foot was lined up straight. That scared the shit out of me. I thought I dislocated it. We were all pretty scared shitless, to be honest with you, because it looked horrible and it felt worse. As soon as I stood up I was excited that my foot was still straight," Bryant said. "I was happy to see that it was lined up and then I walked in the locker room and said, 'OK, maybe it's just a sprained ankle and I can deal with it. The strength felt good, I could push off on it. It was still sore, so I had to stop being a chump and just suck it up and go out there and play. [Right now] it's pretty swollen, it's like a baseball outside of my ankle, but the strength is still good. So even though it looks horrible, I can still push off of it and things like that. I'll just do what I always do: don't sleep, get treatment around the clock and I should be fine. I'm still mad i left 4 shots off the table during my absence, though."

(On Bynum) "It looks like he's kind of figuring things out. I don't know if he's putting something in his cereal in the morning or what."

(On Drew possible being the best Laker) "Let's not hit the crack pipe yet. But he's sensational."

(On pre-ASG Lakers vs post-ASG Lakers) "We were playing horrible basketball but I knew that we would be fine. We know each other very well. $#\% Coasters!"

The Resistance was not there

Hoopdata Boxscore (LAL too good inside, DAL too bad from 3-9 ft and from long range.)

A main difference between tonight and the Lakers' loss to Dallas back in January was the play of the Mavs' backcourt. They torched the champs in the first meeting with some brilliant shooting, but in this one they couldn't find the touch. Jason Kidd, Jason Terry, Rodrique Beaubois, Jose Juan Barea and Corey Brewer combined to make 12 of their 37 attempts. Some of these were open looks that just didn't fall. Plenty, however, resulted from Laker defenders running them off the three-point line and into the Bynum-enforced no fly zone.

Andrew Bynum was the difference in the game as he had 22 points and 15 rebounds to lead the Lakers, who were able to bounce back after having an eight-game winning streak snapped in Miami on Thursday. Bryant turned his left ankle late in the third quarter. Despite the injury, he played more than half of the fourth quarter to help the Lakers secure the victory. After the game, he commented that he was worried that he was done for the season based on feeling that he severely injured his ankle.

The effort was there and the execution was solid, but the Mavs aren’t going to win many games against this good of an opponent when their top four guards shoot a combined 11-of-34 from the field. The Lakers played some excellent D, but they weren’t responsible for Rodrigue Beaubois’ missed jumpers, Jason Terry’s blown opportunities, or Jason Kidd’s unfruitful three-point attempts. This was a very winnable game for the Mavs, and their proximity to victory stands for reasons more legitimate than their slim scoring deficit.

This was the type of game where everyone who stepped foot on the floor contributed to the ultimate outcome. Ron Artest continued his improved play, scoring 12 points and grabbing eight boards, including a dagger offensive board and put-back with under a minute remaining. That a pivotal offensive rebound provided arguably the game’s most important moment was somewhat ironic considering the Mavs held an advantage on the glass all night long (48 to 43 rebounding edge).

Haywood bricked NONE of 2 from the line. Celebration for our third-best Center, Beaches! [nsfw]

No FTs for Terry, Beaubois, Kidd, Chandler, 2 for Barea. ugh 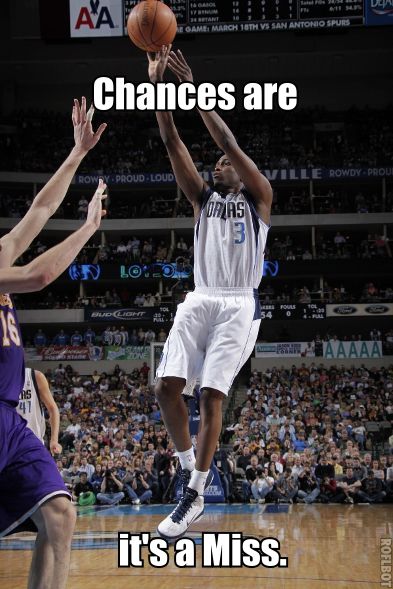 Disclaimer: If you couldn't tell by now, all italic sentences are made up thoughts, not actual quotes. Also, Freethrows.

The Mavs (beat/lost to) [the Los Angeles Lakers]¹ tonight (thanks to/despite) Dirk’s Awesomeness. The (cloud in the silver lining/major culprit) once more as usual was the late lack of support from his team-mates, with the exception of Tyson Chandler/Jason Kidd². Especially useless was Jason Terry/Brian Cardinal/Corey Brewer/Jose Barea/Shawn Marion/Brendan Haywood/Rodrigue Beaubois³ and it is (GUESS WHAT) THEY’RE ALMOST NOT ALL USELESS!