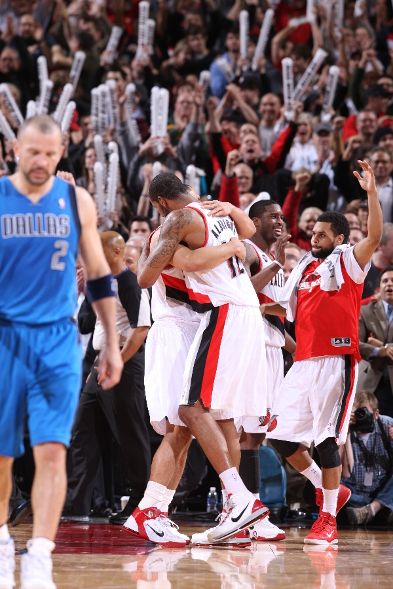 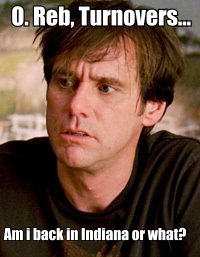 (On the game) "I think the story of the game was just the possessions. They got 18 more shots up than we did, because we struggled to finish off possessions and they got a lot of offensive rebounds. And the turnovers they forced turned into 22 points and we forced seven that turned into eight, so that’s a huge difference. That to me is the biggest part of the game and down the stretch they made plays."

(On Dirk's last shot) "In that situation you’d love to get a completely unmolested shot, but it’s difficult. I thought Dirk did a good job of creating a look and we just didn’t get it down."

(On Aldridge) "He’s a great player and this is the third game he’s really hurt us. We used different coverages on him, different guys, and his ability to score inside and then pop out and hit shots makes him really tough." 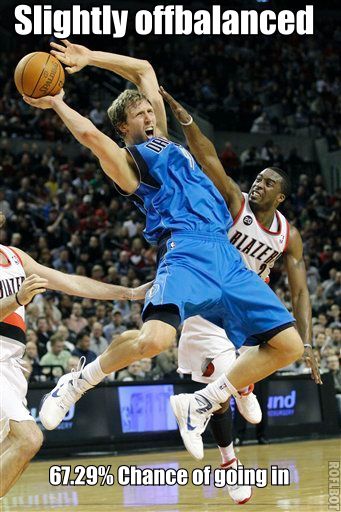 (On the Loss) "Man, this is a tough one. You shoot 60 percent on the road and lose, that’s tough. Turnovers killed us down the stretch. We doubled them in turnovers and that really hurt us. Really, it was offensive rebounds in the first half and turnovers down the stretch."

(On the Blazers) "You’ve got to give them credit, they made so tough shots. I mean, Roy was in there in the paint a couple of times over Tyson. They made some tough shots."

(On Roy) "He made some tough shots and he looks like the Brandon Roy of old out there. If he shoots the ball like that they’ve got two legit go-to guys with Aldridge, who is playing phenomenal, and him. So, they’re gonna be tough to beat in the playoffs whoever they see."

(On his last shot) "Actually it was a really good look for eight seconds. The ball actually got tipped and that stole another two seconds off the clock. Kidd had to run to the backcourt and get it, but for that I actually had a really good look. Faked out Wallace, three guys went with Terry, who was a big threat down the stretch, obviously, kicked it to me, let him fly by and had a good look at it. Down three, that’s about as good of a look you’re gonna get." 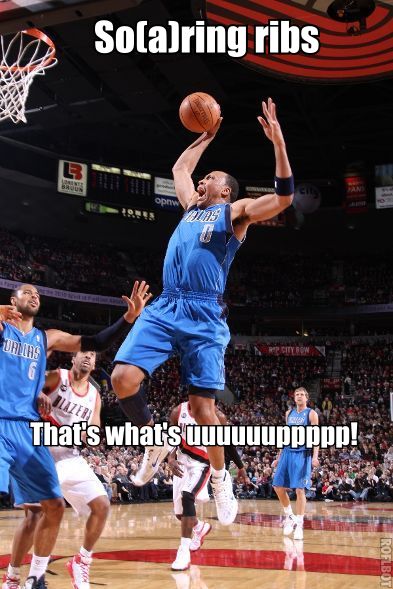 (On the game) "It was a good game, we’ve just got to learn from our mistakes out there. It's not like it's the middle of march and we may run out of time soon or something."

(On GSW next) "It’s a totally different team. That ain’t the same kind of team we play tomorrow. They don’t have a LaMarcus Aldridge over there, but they’ve got a Monta Ellis over there and a couple of other guys that are playing well. So, we’ve just got to get our rest, because it’s gonna be a track race. They put up a lot of points, they like to score, so that’s all." 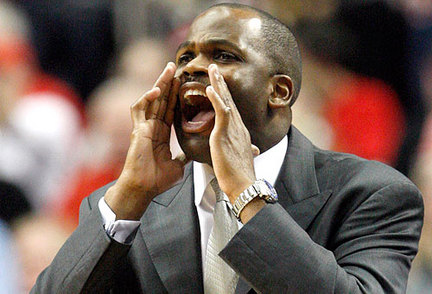 "You have Cardinal on you! Drive right at him, Brandon!"

(On Dallas) "Dallas is a really good team. They're shooting the ball... i think they made their first 11 attempts. Shooting 73% for the first quarter, 63% for the half. I was really impressed with our guys just staying with it. Not giving in, not giving up. We've been talking about challenging each other, encouraging each other, staying together. I thought they did that tonight and always found a way to get this win."

(On the Win) "I think the one thing is that we've been locked in. Tonight they were locked in to playing these guys and competing. I thought the effort was certainly there. We were down and they were making unbelievable shots. That's a good team, they've been together for awhile, they know each other like the back of their pimphand, but we hung in there. We were finally able to get a little lead and control the game the rest of the way."

(On Roy) "That's the best I've seen him this year. And we've talked to him about his minutes, he's feeling good with the minutes that he's been getting and we need to keep him there. That's working, we haven't had any setbacks and keep him there. I thought he did a great job tonight. We moved him to the point and he made some big plays for us, big shots."

(On Rudy) "I thought he was the difference. We got into the game when Rudy got pressure on the ball and started forcing some turnovers. We got some traps going and all of a sudden we started to make some shots and make a run." 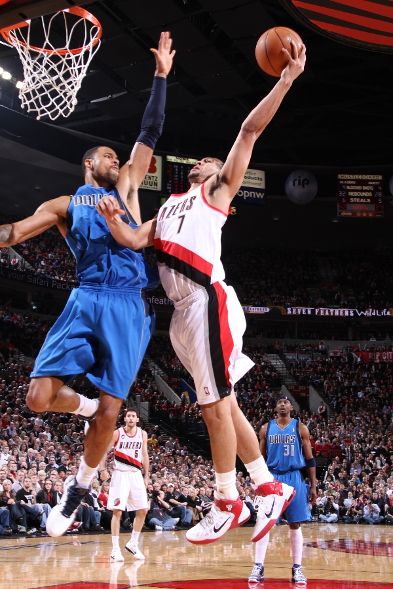 (Don't call it a comeback) "It's a process. I try to stay even keel with everything going on. Even tonight, being able to play well was great, it felt good to be back out there on the top of the key, having the ball, creating some offense. It's just good to be back in a moment like that. The biggest thing is just trying to continue to build. Next game could be different. I've got to challenge myself to push through, and know that my body's OK."

In a game where both teams played to type the Blazers overcome some startlingly bad early defense with plenty of energy and rebounding, foiling the Mavs' attempt to run away with the game in the first half. Neck and neck through the final period the Blazers amp up the offense and defense, beating the Mavericks to every ball, overcoming their immaculate scoring attack with an all-out blitz. Every Blazer, including the entire supporting cast, contributes to the win in a fantastic game to watch.

While the win left the Rose Garden crowd ecstatic there lingered a sense that a lot went right for the Blazers, perhaps too much to feel any real confidence if these teams were to meet in the playoffs. Portland's adjustments caught Dallas off-guard, their unconventional late-game lineup was particularly successful, Jason Kidd attempted just one shot during the entire game, Jason Terry didn't go off (like is capable of doing), both Rudy Fernandez and Wesley Matthews were hot from distance on the same night.

It remains to be seen whether or not the Mavericks will have a chance to regain the No. 2 seed over the Los Angeles Lakers. Either way, the Mavericks will need to crank up their defensive intensity and work on protecting the ball over the last 15 games.

And after two bad, momentum sucking losses on the road in the all important playoff chase, Portland find themselves once again with a bit of that sweet, sweet confidence.

Haywood bricked NOTHING from the line. Celebration for our third-best Center, Beaches! [nsfw]

NO FTs for Terry, Beaubois, Chandler, Marion, 2 For Kidd, Barea, 9 for Dirk. That's it. 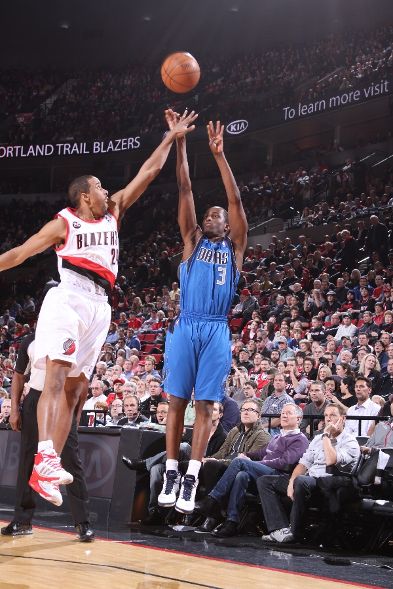 Disclaimer: If you couldn't tell by now, all italic sentences are made up thoughts, not actual quotes. Also, gak

The Mavs (beat/lost to) [the Portland Trailblazers]¹ tonight (thanks to/despite) Dirk’s Awesomeness. The (cloud in the silver lining/major culprit) once more as usual was the late lack of support from his team-mates, with the exception of Tyson Chandler/Jason Kidd². Especially useless was Jason Terry/Brian Cardinal/Corey BrewerDNP-sucka!/Jose Barea/Shawn Marion/DeShawn Stevenson/Rodrigue Beaubois³ and it is (GUESS WHAT) THEY’RE ALMOST NOT ALL USELESS!