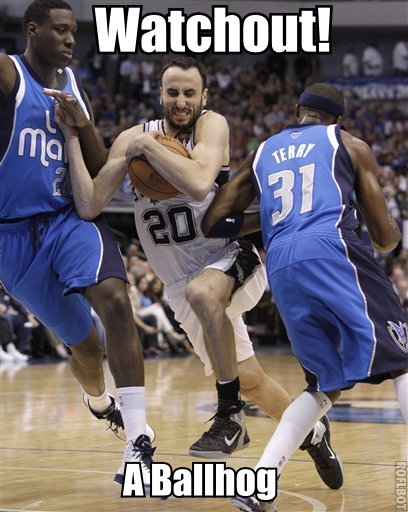 Terry: "Could possibly have the rabies, so i'll better not touch....Of course, the frenchie has to hold his claw....tsts" 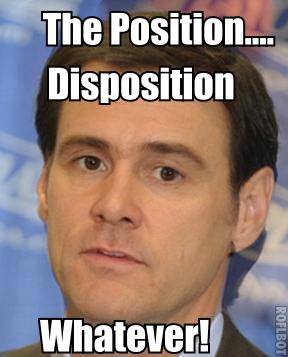 (On the Spurs 14 steals) "This has been the best team in basketball all year, because they’re so solid. You can’t expect to turn it over 19 times for 25 points and be in a position to win. It’s just too difficult."

(On the Mavs) "The guys battled in the second half like crazy, and we just couldn’t get there. They made plays. They went on a run and we battled back again. We did secure a rebound, but Ginobili made a steal and Neal hit the three in the corner. That was an enormous play. Then Parker banks in a three, and that was tough. We had just started to get a little momentum, but look, there are no excuses."

(On Rodrigue Beaubois) "I really love his disposition right now. He's becoming one of our best perimeter defenders. He's getting a real feeling for what it means to perform and win in the most difficult circumstances. This experience he's getting is extremely important."

(Does that mean you will get him the experience from now on?) "Next question."

(On missing Marion in the 2nd half) "He’s one of our best players and he had a great game going. He was one of the main reasons we were able to get some momentum going into the halftime. It was a freak play, where his wrist got knocked into Roddy’s arm or something like that. It was bothering him too much to come back, so that was a big loss." 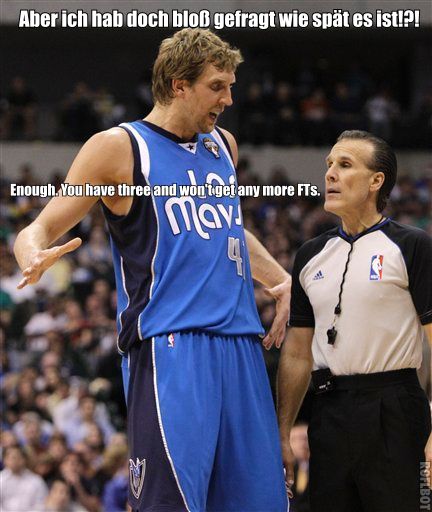 (On the first Quarter) "It was a tough one there. We were just a step slower. Give them a lot of credit, they sat on a loss for three days and came out swinging."

(On the biggest issue in the game) "What killed us all night was penetration. They were living in the lane all night long."

(On the turnovers issue) "When a team pressures us a little bit, we throw the ball all over the gym and we dribble the ball off our feet."

(On not beating a few Playoffteams in a row) "What do you want us to do? You cant be negative now. We still have a month left in the season and we're trying to make a little run and take some momentum into the playoffs and go from there. But, this is too early to pack it in now." 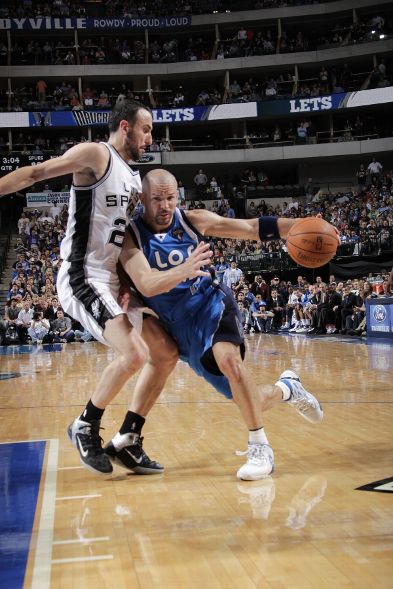 (On the tough stretch of games) "There's not a big concern. You're going to go through this during the season and you just have to play through it."

(On Beaubois) "I thought Roddy played well. He’s going to be up and down and he’s going to have good and bad games, but this is an experience and this is what he needs right now. The more time that he’s on the floor the more he will be seasoned for the next season, and that’s the playoffs."

(On the Spurs Big Three) "That’s why they’ve won championship rings. When you get those three going, it’s hard to stop. Parker, Ginobili and Duncan were going tonight." 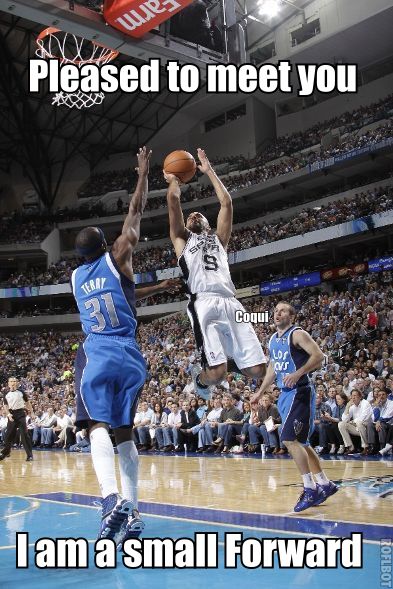 (On the Game) "This one we wanted to win it and it didn’t happen for us. We’ve got to stay positive and we’ve got to find our rhythm and obviously that’s not happening right now."

(On Marion's injury) "It was tremendous because he was 6-of-8 from the field, he was causing matchup problems and he was in the paint all night long laying the ball up. He’s our only best defender, so it had an impact on the game."

(On Defense vs Offense) "There was a stretch there in the fourth quarter where they didn’t score and neither did we."

(On optimism) "This loss definitely hurts, but we’ve got to come to practice and work hard tomorrow. Then Golden State is another opportunity to get this rhythm back and get that good vibe back and run off six or seven games in a row." 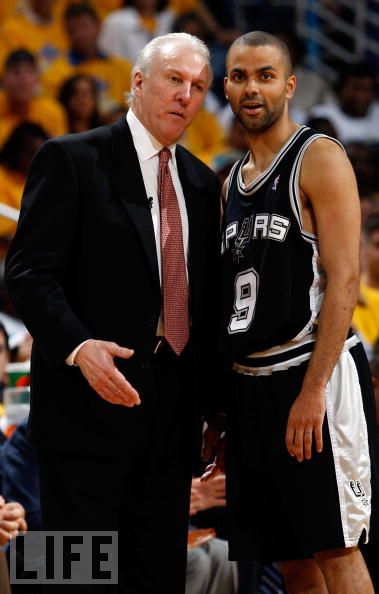 "What did i talk about the last three days?" - "We shall switch the Flop."

(On almost signing Kidd when he was a FA in Jersey) "Yes, we did try to get him. We thought he and Tony Parker could play together really well. But it didn’t happen, and he’s done really well for himself."

(On Kidd drinking from the fountain of youth) "I’ve been saying that for three years. He’s incredible. He really is. And what’s really interesting is you don’t see any diminishing of physical abilities. He’s got the same speed, the same quickness. Maybe he goes home and puts more ice on, and none of us see it. He doesn’t show it a lick, and that’s what’s amazing to me."

(On his best 'both teams played hard' impression) "We made enough shots down the stretch, and we were fortunate to get the win."

(On his Big Three producing) "Well, that’s what they’re contracted to do.’’ 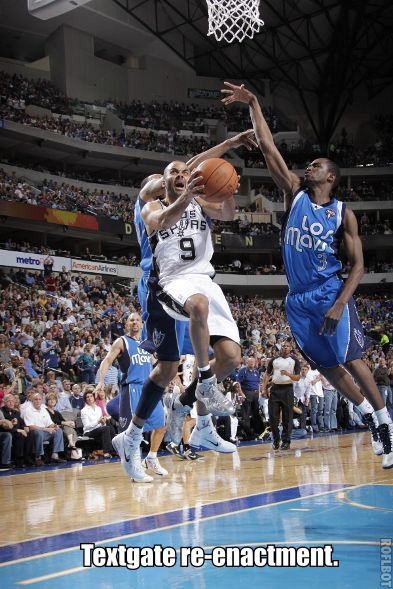 (On 3 days preparation) "When you have Pop in your ear for three days, it can be a long three days. In the film sessions we talked about not playing physical, not playing with intensity or playing good defense. Tonight we wanted to make sure we stayed in front of people and made sure their shots were hard."

(Why the quick timeout?) "We were supposed to switch and we didn't switch. We’d talked about defense for three days, and the first play we had our first mistake. So he was on fire from the get-go."

(On banking threes) "I felt good when it left my hands. I’ll take it. I’ve been shooting threes well lately."

(On the win after Miami) "Nobody likes to lose by 30. It was just a big comeback win for us on the road against a very good old team." 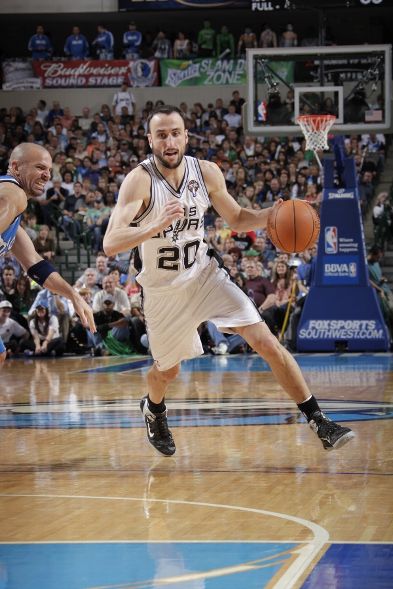 (On the Game) "We were coming from two bad losses against contenders. We needed to step up and have a good game today. Not necessarily to win, but we needed to compete and play with a very good game. Today, we did and we won, so we’re going home pretty satisfied."

(On combined 80 Points from Tim, Tony and him) "We all three played pretty well. It felt great. We needed to step up and have a good game. We had a solid defensive game, and we didn't take crazy shots. Defense was a big key today." 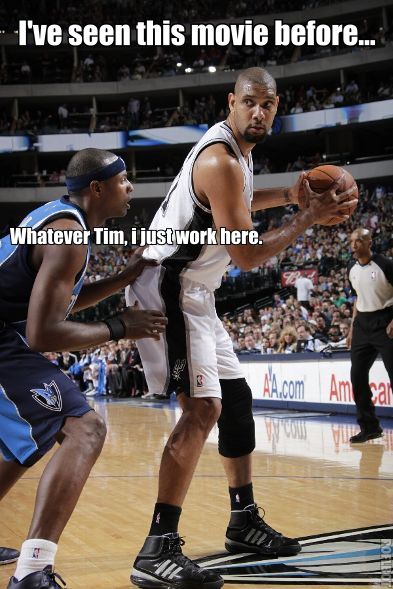 (On the game) "When we're not making shots, we have to rely on our defense. We had great energy, great awareness. There was a lot better focus all around."

The Mavericks are in the midst of a tough stretch of games and the results are not what they were hoping for. It does not help that they are losing against teams they could potentially see in the playoffs.

It's much harder to take Dallas seriously as a championship threat given these two recent scores:
LA Lakers 96, Dallas 91
San Antonio 97, Dallas 91

Almost identical games, both coming at home against the Western conference favorites. Again, if you can't beat these teams at HOME late in the year...

The game featured a blistering start that allowed the Spurs to post an 18-point lead, followed by a furious Dallas rally to tie the game late, all leading to a close finish typical of the Spurs-Mavericks match ups of the last decade or so.

To those who still cling to the fourth quarter as all-important, take a look back at the tape of the first quarter from this game. Sure, the Mavs could have played better in the fourth, but this game was lost in the first frame.

Tony Parker played the way the Spurs need Tony Parker to play: fast and at the rim. No one on Dallas’ roster had slides enough to stay in front of him on defense. If Tony Parker could dunk, he’d have career reel to rival Dominique Wilkins’. He’s a joy to watch around the rim.

Haywood bricked 2 of 2 (100%) from the line. Celebration for our third-best Center, Beaches! [nsfw] 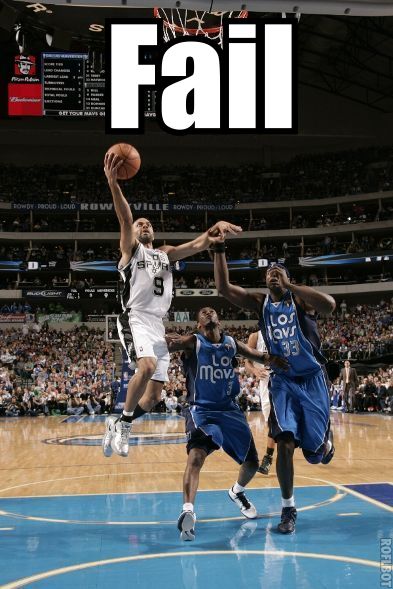 Disclaimer: If you couldn't tell by now, all italic sentences are made up thoughts, not actual quotes. Also, Spurs.

The Mavs (beat/lost to) [the San Antonio Spurs]¹ tonight (thanks to/despite) Dirk’s Awesomeness. The (cloud in the silver lining/major culprit) once more as usual was the late lack of support from his team-mates, with the exception of Tyson Chandler/Jason Kidd nobody². Especially useless was Jason Terry first 3 quarters/Brian Cardinal/Brendan Haywood/Jose Barea/Shawn Marion/DeShawn Stevenson/Rodrigue Beaubois³ and it is (GUESS WHAT) THEY’RE ALMOST NOT ALL USELESS!