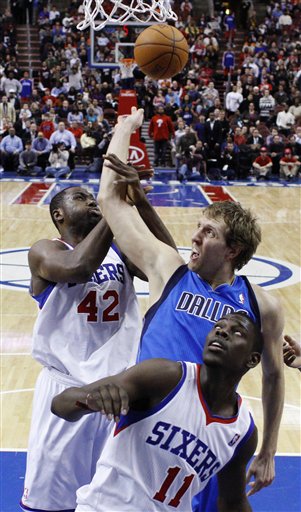 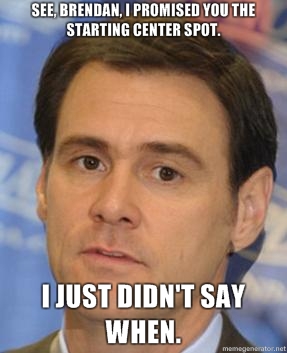 (On Chandler's injury) "It’s a right ankle and I don’t know the severity, don’t know any kind of timetable. We’ll see how long Tyson is out or if he’s out at all. And if we’re gonna lose him for a couple of games or whatever it is, Brendan and Ian are gonna have to carry us. Shudder."

(On Terry in the 2nd half) "When it kept getting close or tied, he kept answering. And it was key for us because it kept us energized."

(On the 76ers) "Philly is a team that keeps coming at you. They’re a persistent team and they keep battling. So, you’ve got to outfight them, and I thought in the end we did. But it was certainly a very difficult game." 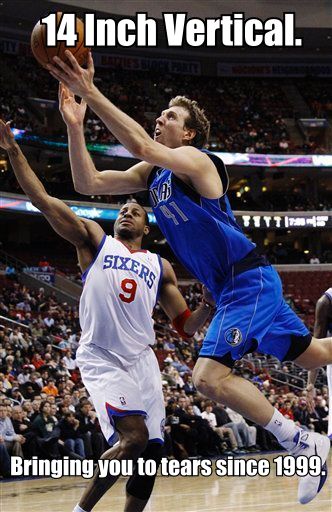 (On Terry) "I haven’t seen him like that in a long time. He was attacking from the first quarter on. He made threes, he made pull-ups, he showed us the whole package tonight, and it was nice to watch."

(On Chandler) "We're concerned about Tyson. Losing him in the second half hurt, but Brendan and Ian got the job done.

(On the Mavs Offense in a nutshell) "Shoot the ball, share the ball." 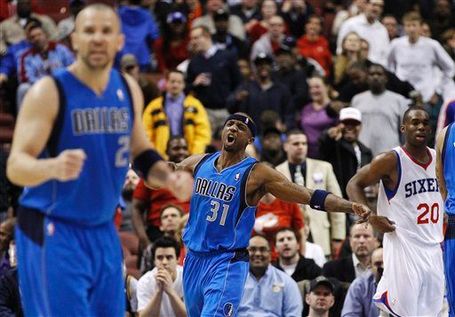 "Camera is sharp and focused? 'cuz im'ma get a trip-doub."

(On Terry's scoring) "That’s what he does. He’s a guy that can put points up in a hurry, and he did that again off the bench. We expect that from our bench and they delivered tonight."

(On his Triple-Double) "Just trying to help my guys. I just tried to come back and help rebound the ball."

(On concentrating despite Chandler out) "This is a special team, in terms of focus. We don't want anybody to be hurt, but when you have this type of team, we have a special ability for sticking with things." 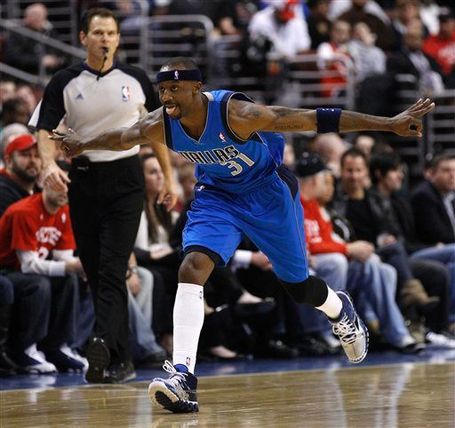 Not exactly a Concorde, but we'll take it.

(On the Bench) "All season long, I’ve been telling everybody we’re the best bench in basketball. Obviously, what [the Sixers] do offensively, they were No. 1. Tonight, we came out and we did what we do. Pretty soon they’re gonna talk about us."

(On his 30 Points) "I got into a rhythm early. I think it was a jumpball that Dirk won, came off a staggered screen, hit a three and didn’t even follow through. And I was like, ‘Man, I must be hot.’ I had to keep going."

(On Philly coming within One in the fourth quarter) "Tonight, there for a second, it looked like they were gonna take control of the game. But we came back and made some shots. It was whoever wanted it and that’s how the game went. And that one possession definitely signified what that game meant to us. " 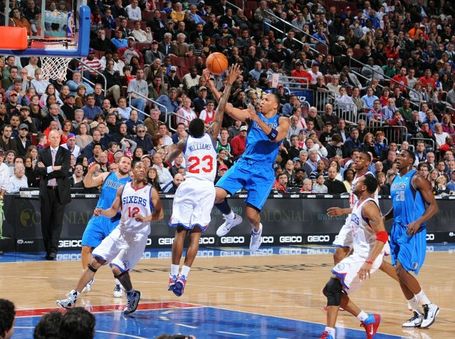 (On the Mavs) "Anybody on our team is capable of going out there and having a big night. It just so happened it was Jason and Jason on this night. We have so much experience that any one of us can do it on any given night and that gives us added confidence as a group." 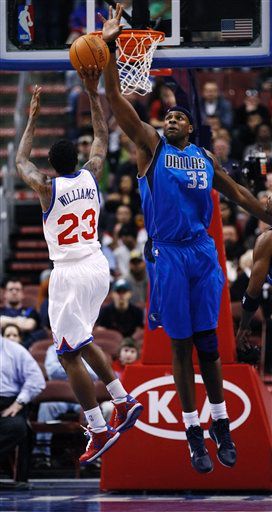 Half of tonights blocks. From both teams combined.

(On Chandler going down) "We all pick each other up. I knew I had to play my role and Ian was gonna come in and do a good job. And when one man goes down the ball keeps rolling." 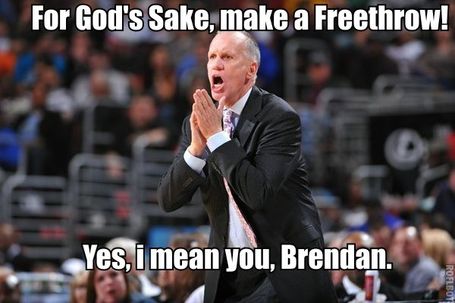 (On the teams) "I told our guys after the game I thought we gave great, great effort tonight. That team is so hard to guard. Dirk Nowitzki makes the most unconscionable shots. Big time, big game player. I think his record now is 42 and nine on the season when he plays. They have won over 80 percent of the games with him playing. Jason Terry was fantastic tonight. They ran a beautiful play coming out of the timeout where we had to bump a little bit to help, and he popped back and hit the jump shot. Jason Kidd hit a big three. What you really saw tonight to me was their big game experience and their playoff experience just trumped our energy and effort tonight."

(On making plays) "Andre [Iguodala] made two brilliant defensive plays in a row, and we did not capitalize on either one of them. I thought after those two plays I could feel a little bit of the air go out. That is the importance of we have to make the simple play. Under pressure, we must make the simple play, and we did not. We had two fast breaks, and we did not convert on either one of them. We could have taken the lead. In the fourth quarter, we missed seven free throws. All of these things against the Dallas Mavericks who are now 44 and 16. You just are not going to be able to win a game like that. Our effort was great."

(On Turnovers) "I thought our turnovers were bad again in the first half. I thought we let their length bother us. I thought we did a better job adjusting in the second half. We only had three turnovers in the second half. I was getting a little bit concerned. We just had a 17-turnover game, a 16-turnover game, and we are a little over 13. We cannot turn the ball over. We have got to get more shots at the basket. The missed free throws, some blown opportunities on the break and just clutch shooting by Dallas was the difference."

(On Terry) "He is a great player. We talked about that before the game. Their bench, [Jose] Barea came in and hurt us once again. He had seven. It seemed like he had more than that. They got 54 off their bench tonight. In the last two games, I think they had gotten 61 and 55 off their bench.

(On the bench) "Our bench is important. We think that if we win the battle of the bench, that that is a huge advantage tonight. Their bench was more potent than ours. Our bench had 29. Normally we win that battle, and tonight we did not." 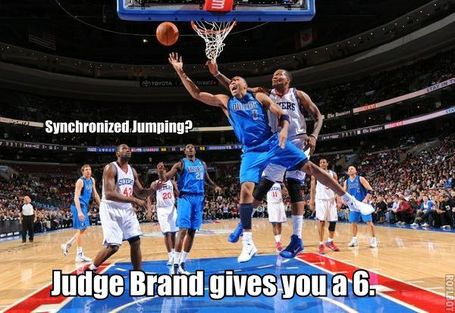 (On his finger) "It’s good. It’s not fractured. It’s not broken. Dislocated again but they just popped it back in. It will be alright, though."

(On Dirk and JET) "Yeah, Terry and Nowitzki, especially late-game situations are tough to handle. It’s kind of like, pick your poison. You try to stop one, and the other one gets open for a jump shot. Terry attacking that rim. Their bench was really amazing tonight." 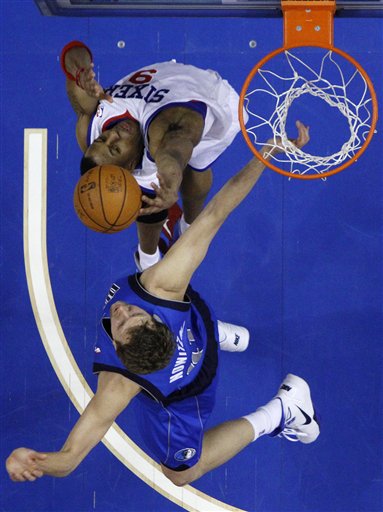 (On him being put on Terry defensively) "Well, they did a good job of really forcing the issue. He would set a pick-and-roll with Dirk. They made us either switch, or Dirk would roll and he would get open looks. So we had to switch. It’s just the way this game went. They did a good job of going to a play and trying to figure our weak end."

Pregame Doug 'Rick, does your team ever play a bad game?' Collins

This is a common set that the Dallas Mavericks run for Dirk Nowitzki to get him the basketball in the post. The ball goes to Jason Terry and then back to Jason Kidd in the corner. Terry gets to the elbow and sets a screen for Nowitzki. Both defenders drop to defend Nowitzki and that leaves Terry wide open for the elbow jumper.

More of a problem than just Terry for the Sixers was their inability to put together any type of offense in the 4th quarter. The Mavericks, as many teams do against the Sixers, went into a zone to force Philly to make jump shots rather than attack the basket. This strategy from Dallas worked to perfection as the Sixers were missing jumper after jumper every possession. While they were getting good looks because of ball movement, nobody was able to make the Mavs regret forcing the Sixers to shoot.

Talented though Beaubois may be, there are still plenty of things that separate him from Terry and others. Within the context of the Mavs’ offense, one of them is screening; Dallas runs a lot of baseline action (and some at the elbow) in which guards are called upon to pick off Dirk or Shawn Marion’s man. Beaubois did a better job on Tuesday in that regard than we’ve seen in a long while, but he could still learn a lot from JET on how to set screens on players twice his size.

In short, J.E.T. was simply lethal. [....] Jason Kidd pitched in a triple-double (13 points, 13 assists and 10 boards) showing why he’s in the discussion for the greatest point guard ever.  Kidd had ZERO turnovers.  Sixers color man Eric Snow said it best “No one controls the game quite like J-Kidd.”

Haywood bricked 5 of 6 from the line. Celebration for our third-best Center, Beaches! [nsfw] 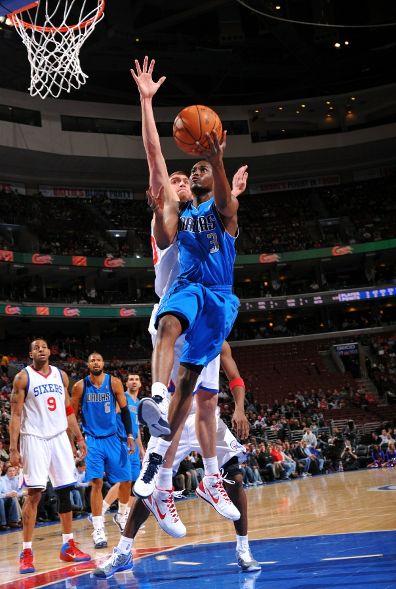 Disclaimer: If you couldn't tell by now, all italic sentences are made up thoughts, not actual quotes. Also, breaking news, the Mavs remembered to tie their shoelaces backwards and are subsequently on a 7 Game Winning streak. It's gotta be the shoes.

The Mavs (beat/lost to) [the Philadelphia 76ers]¹ tonight (thanks to/despite) Dirk’s Awesomeness. The (cloud in the silver lining/major culprit) once more as usual was the lack of support from his team-mates, with the exception of Tyson Chandler/Jason Kidd². Especially useless  was Jason Terry/Peja Stojakovic/Jose Barea/Shawn Marion/Brendan Haywood/Rodrigue Beaubois³ and it is (GUESS WHAT) THEY’RE ALMOST NOT ALL USELESS!