Warriors @ Mavs Post Game 70 Quotes "Not sure if serious" 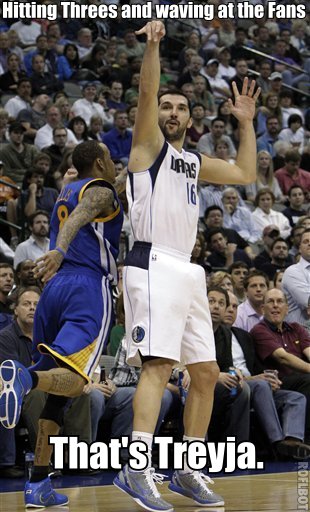 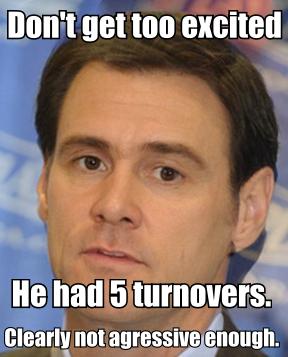 (On the win) "It’s important to win. It’s important to play our game as well as we can play it. Tonight, it’s a 30-win team on the one hand, so nobody’s gonna get too excited about this score. On the other hand, it’s a team that’s very skilled and is averaging 103 points. So, the fact that we were able to hold them to a good number is something to build on."

(On Treyja Stojakovic) "Some guys that have this experience have the capability to get it going like this. If you think about it, he’s been shooting the ball at that level for 20 years. If you look at 20 years, 10 days is not that much. You can tell that he’s been working to keep his conditioning. It was big for us tonight. We needed it."

(On why Peja is so important) "It helps our spacing; it gives us another major threat in transition and spotting up. He’s a terrific player off movement. And defensively, he holds his own. He does better than a lot of people give credit for because he’s experienced, he’s tall and has length, and he knows how to play angles."

(On Chandler) "Tyson was a major presence for us inside. 17 boards is a massive number. Even though he only had 1 Block, he altered a lot of things in there. I thought we did a good job using our length in the game."

(Troublefree Game?) "Where we got into trouble was the second quarter, where we started throwing it around and turning it over. The lead went from 17 to 6 or 8, and that wasn’t good."

(On sitting out with his injured wrist) "I’ll be alright. I think Tuesday we’re gonna practice and I’m gonna suit up and get through it this week and I’ll be fine." 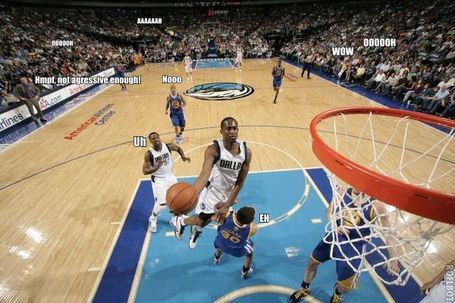 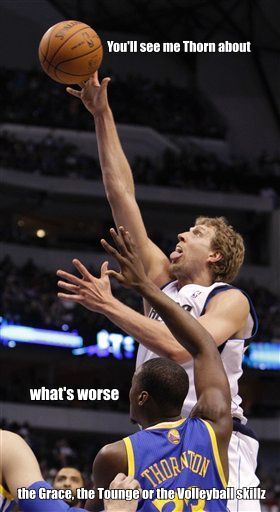 (On securing a playoff spot with the win) "We did? All right. (lol) It's always good to know. We have 10 50-game seasons in a row and it's probably going to be another one this year, so consistency has been great. But there's only thing missing and that's a ring."

(On the Centers) "Tyson was big inside, Ian came off the bench and gave us big rebounds, and that definitely won us the game."

(On Playing international in case of a Lockout) "That all depends on how this season plays out. If we have a long run to June, I might not. Everything's kind of up in the air with the lockout. If we're locked out, I might play this summer. We have a qualification coming up for the Olympics again. The Olympics for me in Beijing were so much fun. They were a blast. I'd love to go to London, but we have to qualify for it first. We have that this summer; if we're locked out and I know it's going to be a little longer and I don't have anything going anyway, I might as well stay in shape and play."

(On CBA negotiations) "Hopefully, we can find a way to kind of resolve this a little earlier and not have a shortened season, and still, hopefully, find a good way for the owners and for the players so we can still have an 82-game season. It doesn't look good right now, but things can change in a meeting or two meetings and within a day or two things can change. We'll just have to see what happens this summer."

(On Beaubois in Aggro Mode) "That’s Beaubois' game, I don’t think he even knows what he’s going to do next." 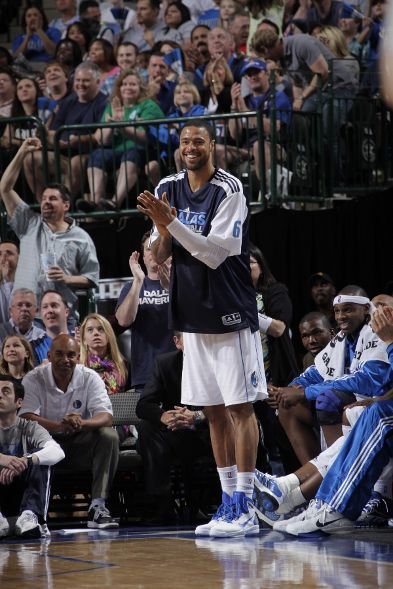 "Look at JJ! Dirk sets the Screen and he dribbles right through his legs!"

(On Defense) "We’ve been allowing teams to get out to great starts lately, but tonight I felt that we did a great job of challenging shots."

(Why the Blowout?) "Tonight we got stops, rebounded the ball and were able to get out and run."

(On Treyja) "He has nights where he just can’t miss. Everybody knows who Peja Stojakovic is in this league." 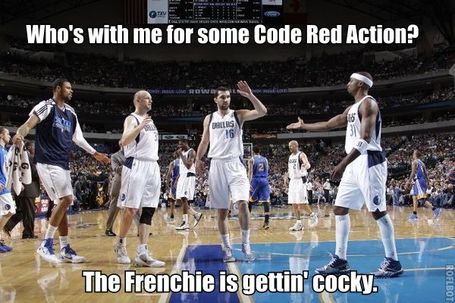 (On Peja and being healthy) "If you look at that Spurs game, we went five minutes without scoring. Peja plays five minutes and puts in 11 points. So, that tells you right there when a guy can get hot like that, and it could be any one of us, but you've got to have that out on the floor. You can't have that in the locker room in a suit or on the training table." 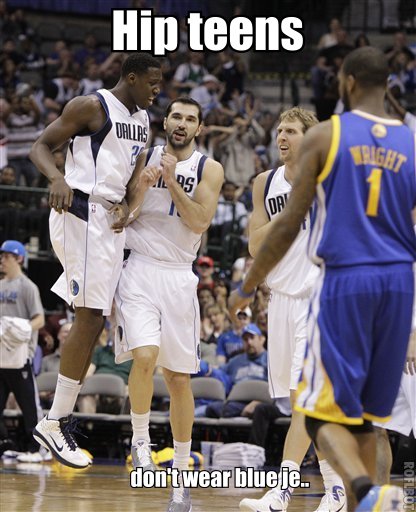 (On his stiff, stiff body) "It was frustrating for me; just getting back from the knee thing and having the setback with the neck and back injury, it wasn't fun at all. I was so happy being back with the team, going through the things you usually do, practices, games, shootarounds. I had to stay away for a few games to get right."

(On his game) "I felt good enough to play. I was a little worried about trying to avoid hits, but it felt good. When you come off the bench, you have to be aggressive. I knew that I would be coming off the bench early on and I was lucky that I was put in position to make the shots that I did."

(On 5 threes) "As a shooter I think you always shoot. You never lose confidence; you do what you're supposed to do. That's something I've done throughout my career. Just some nights shots aren't going in. I just have to keep being aggressive, keep being a threat out there and keep defenses honoring me on the court." 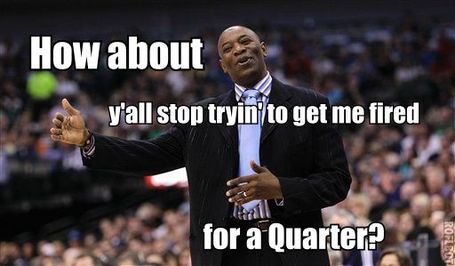 (Was that really Defense what the Mavs played?) "We missed a ton of open shots and opportunities."

(On getting his Rookie Udoh to defend andrebound) "The rules tell you that you can't touch a guy, and a young player believes that. Now he's seen that he can be more physical with guys and have more contact in there. If you establish yourself in the NBA as an aggressive player, that label will stay with you the rest of your career." 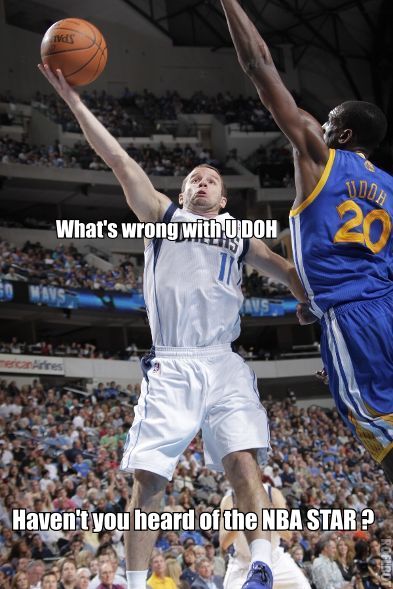 (1 Rebound in 29 Minutes) "I never had a problem rebounding in college. Now you've got all these athletes and everybody is so strong." 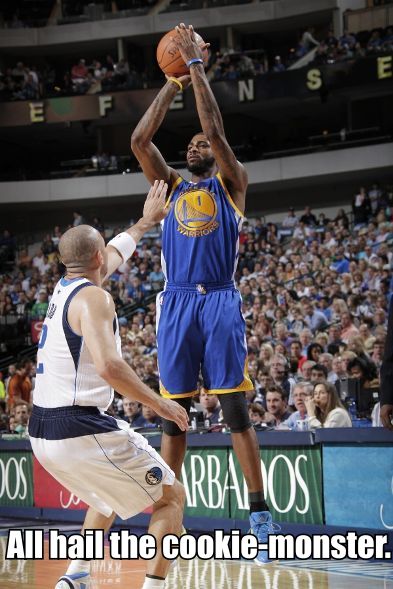 (On Dallas blowing the game open after the Warriors cut the deficit to four) "Yeah, they were getting key stops. We got the game all the way to 4 [points] like you said, but at the end we just couldn’t get stops and they were hitting big threes with Peja out there. They were just getting easy baskets – that was our main downfall. But we got it close, but as a good team they did what they were supposed to do."

(On the team's off-shooting night) "It was just an off night for guys. Guys couldn’t find their shot. I feel like shots that we usually make were going in and out, and we were just missing it. It’s like that at some times. So, we’ve just got to let this one go and get ready for tomorrow."

...one bullet for every point in the final margin, give or take a dozen or so considering the ridiculous scoring margin of this game.

Haywood bricked everything he took from the line bench. Celebration for our third-best Center, Beaches! [nsfw] 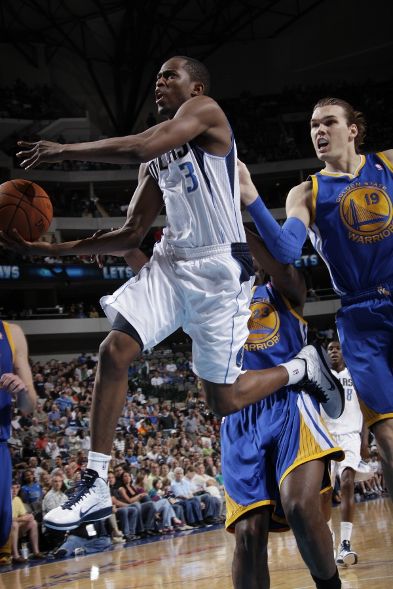 "Who walks through the air, with ball and flair?"

Disclaimer: If you couldn't tell by now, all italic sentences are made up thoughts, not actual quotes. Also, Homey doesn't really play that.

The Mavs (beat/lost to) [the Golden State Warriors]¹ tonight (thanks to/despite) Dirk’s Awesomeness. The (cloud in the silver lining/major culprit) once more as usual was the lack of support from his team-mates, with the exception of Tyson Chandler/Jason Kidd². Especially useless was Jason Terry/Brian Cardinal/Brendan Haywood on the Bench/Jose Barea/DeShawn Stevenson/Rodrigue Beaubois³ and it is (GUESS WHAT) THEY’RE ALMOST NOT ALL USELESS!