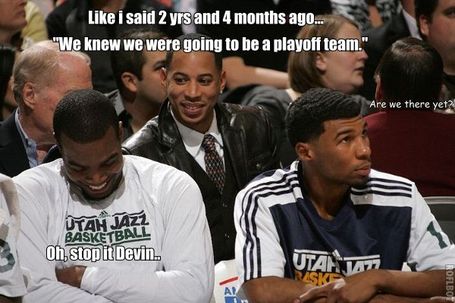 He really did say that. 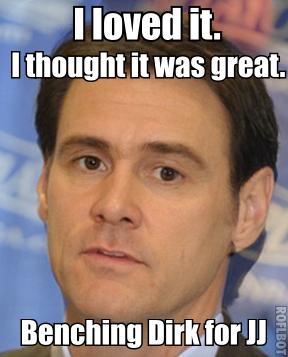 (On the evening) "Every game on this trip is gonna be like this — desperate teams fighting for their playoff lives or playoff positioning and very emotional and crowds that are really into it. And I loved it. I thought it was great."

(On switching to the Three-Guard Linue with Marion & Chandler late) "Nothing else was working good, [i] just kept trying different things. It was something that we hadn’t done in the game, and the extra playmaker was good. It brought more quickness."

(On the Game Whistle-fest) "This is what we need. This is a playoff-style game and very emotional. Hey, it’s all about hanging in there. And we were searching for a group to get us some traction and the group that finished the game was awesome. That group the last six minutes got the job done and it was terrific." 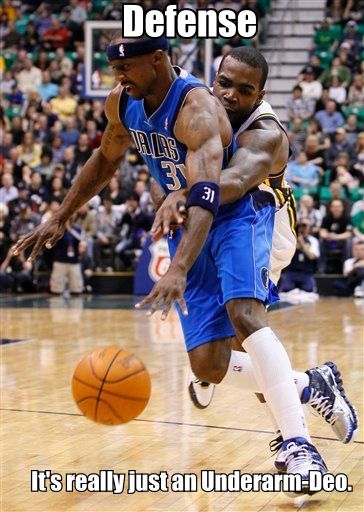 (On Small-Ball) "It gave them a different look, it made us play a little quicker, and as you know, in our flow offense we’re pretty tough to beat. But defensively we scrambled around."

(On the Game) "We didn’t think this game should have been close at all. You know, we’ve been practicing hard, we’ve been preparing hard, trying to play every game like a playoff game. And tonight the level of intensity was like the playoffs. But as far as just getting out and getting the lead, it wasn’t happening for us. So, that was kind of frustrating, but we locked in on both ends of the floor and did what we had to do to get the win."

(On the Road trip) "To start off the road trip with a win in this building, it builds up your confidence. We've got to keep the momentum, and it happens quick. Sunday night, we got to get it going." 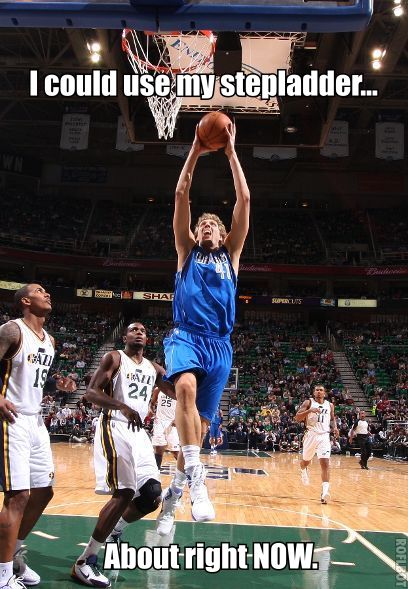 (On the Officiating) "They really called a close game early on. We had a bunch of guys with two or three fouls early."

(On Terry) "He’s one of our closers in the fourth. He’s been doing that for six or seven years, however long he’s been here. And tonight he was great. Twenty-two points on seven shots, that’s pretty amazing. That’s what he almost never does for us, and he’s one of the best shooters out there."

(On Defense) "In the fourth quarter. I thought we really responded."

(On the Team's 4th quarter stomping w/o him) "That was definitely fun to watch." 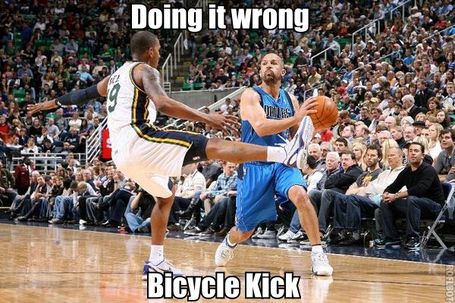 (On the first half) "We didn’t catch the ball and we had a lot of offensive fouls. So, it happens in a game, but we were still down four [at halftime]."

(On the 4th) "Once we took care of the ball and got shots we started to push forward and got breathing room." 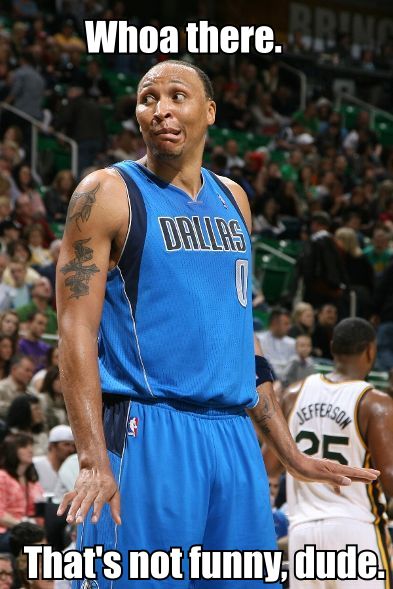 (On the 4th) "We just got into them, made it hard. We took initiative. We made sure they couldn't do anything out there on the floor. That's what we did."

(On the game) "I thought we looked good. Besides the turnovers, we did good. It was a halfcourt game. It was a grind. It was a possession game throughout the whole time until we got that last six-minute stretch and we just opened it up. We did what we had to do to get the win."

(But?) "I felt like we were watching the NCAA tournament at the end of the third quarter. Sixty-two to 58, what kind of score is that?" 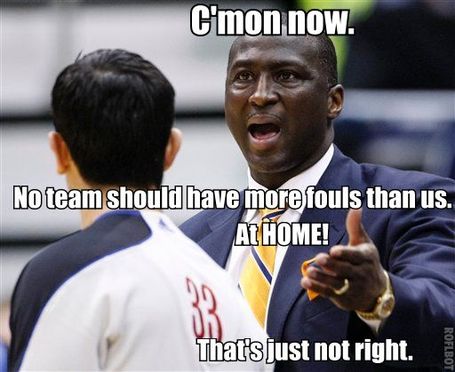 (Ok, now. Did the Mavs actually play Defense?) "We missed shots. They picked their defense up a little bit, but we missed some opportunities inside, and they got a little run on us."

(On the Game) "I thought the guys for the most part tried to play hard. We hung in there, they just started making shots. Barea got one in the corner and Terry backed that one up, and it kind of took the wind out of us a little bit."

(On the 4th, 17-36, why?) "It's the newness of the guys. When you say youth, it's a combination of experience in the league, experience together. The guys we have now closing out games are all in a different spot. Before you had guys like a Deron Williams to make a play or make an easier play for someone else and it's new for them."

(On what to do) "We just got to get better. We have to be learning from situations, executing and playing with a sense of urgency in close-out situations, and getting a little bit tougher." 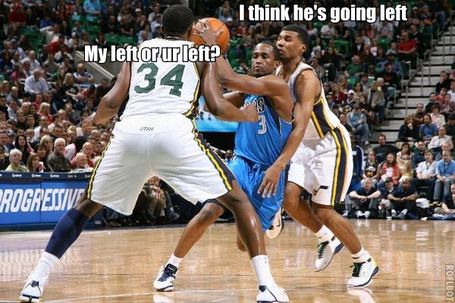 (On the Mavs) "Defensively, they packed the paint. Everything we wanted to do to try to get it inside they did a good job. They took charges, they blocked shots, they were just active and it was tough for us."

(On the Game) "I thought we played extremely hard and fairly well, too. We did a lot of things right. But, they broke us down a little bit and did a good job of taking advantage of the things we gave them." 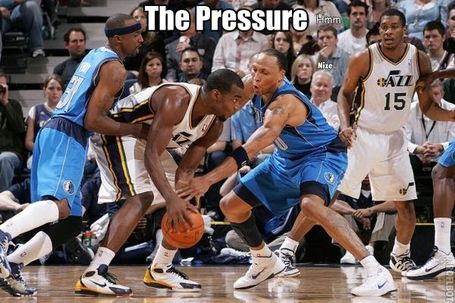 (Did the Mavs play Defense?) "I don’t think it was anything they were doing. We missed shots we should have made, and we turned the ball over. You can’t do things like that against a good team."

The Mavericks were swarming and aggressive, contesting nearly every look, and looked like the defensive team that was seen early in the season.

SLCDunk (just wait for the Downbeat)

Haywood bricked nothing from the line because Utah has no scouting report he didn't get there. Celebration for our third-best Center, Beaches! [nsfw] 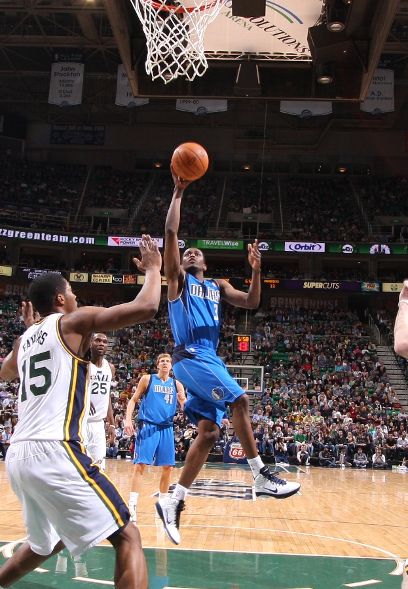 Disclaimer: If you couldn't tell by now, all italic sentences are made up thoughts, not actual quotes. Also, FTs.

The Mavs (beat/lost to) [the Utah Jazz]¹ tonight (thanks to/despite) Dirk’s Awesomeness. The (cloud in the silver lining/major culprit) once more as usual was the lack of support from his team-mates, with the exception of Tyson Chandler/Jason Kidd². Especially useless was Jason Terry/Brian Cardinal/Brendan Haywood/Jose Barea/DeShawn Stevenson/Rodrigue Beaubois³ and it is (GUESS WHAT) THEY’RE ALMOST NOT ALL USELESS!