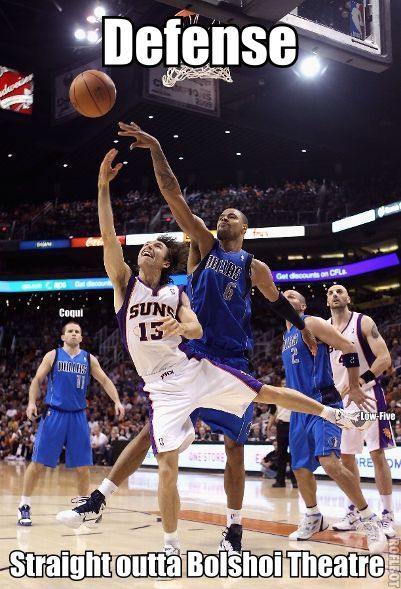 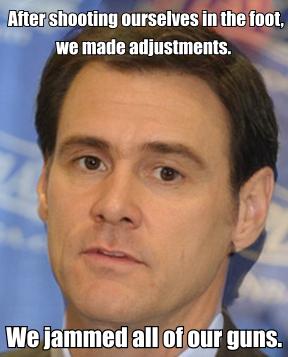 (On the start) "The first quarter was terrible. We allowed them to get layups, we allowed Gortat to get going. They got everything they wanted. They fast-breaked on us, we turned the ball over. I mean, we basically were shooting ourselves in the foot. We made an adjustment from that."

(On playing only 9 Players) "On nights like these, when the shots aren’t going in, hey, we need 12 guys pulling together over there and keeping everybody energized. And that’s exactly what happened."

(On going to Chandler) "Chandler has been the heart of the team all year around the basket and, again, he gave us a presence at both ends."

(On his Team’s Defense) "I thought the defense was pretty solid the whole game. Twenty six and twenty three is a good defensive half against these guys. They’re a sophisticated and highly skilled offensive team and they’re in a desperate mode right now and they’re trying to win every game so I liked our defense the whole way and in the second half in particular. Both teams played at a high level of aggression. It was very physical and the game had a great meaning. These kinds of game come down to will and toughness and I give our guys a lot of credit. Our shots weren’t falling all night. We struggled with turnovers early and to just hang in and come in to huddles and talking about how we’re going to get it done, that’s progress for us and we’ve just got to keep building on that."

(On Kidd) "This guy is a great winner. When he steps on the floor, he’s going to do things that help you win. Trying to quantify what stats are going to equal wins with him, it just doesn’t work. Forget about scoring and shooting percentages and all that stuff.’’

(On Kidd's threes) "It just goes to show you how close the game was, because that first 3 he hit beat the clock by maybe a hundredth of a second. And his level of concentrate to step into that shot and hit all net is phenomenal. And then the other one Dirk just got in a bad way, he circled around and gave [Kidd] an outlet, and there’s no tougher shot in basketball than a 3-point shot if you’re right-handed moving to your left and circling around. I mean, it’s just very difficult. So, it was two phenomenal shots and then we got a couple of big stops at the end which got us home."

(On the roadtrip) "Well, we’re trying to win all the games, and we certainly wanted to get off to a great start. But again, we’re very process-oriented. The work is gonna go on and it’s gonna go on through the rest of this trip, but I’m very happy with the start." 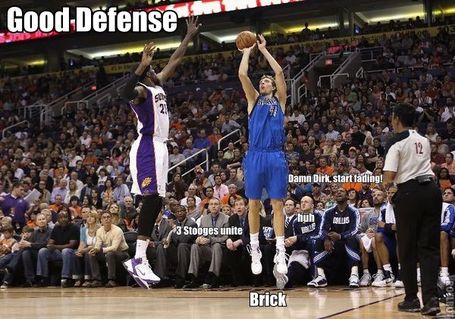 (On shooting 38% as a team) "That’s a tribute to our defense that we win that game. If you would have told me before that I’m 6-for-19, ‘Trix [Marion] is 2-for-10, JET [Terry] is like 2-for-30, if you tell me that before the game that we’d still find a way to win then I wouldn’t have believed it. Yeah, we won that game with our defense and it’s good to know that we can still do that." 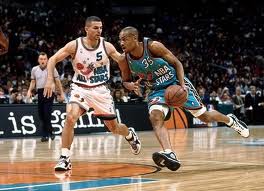 (On not scoring much very often) "My job is to set the table. I could be selfish and shoot 10or 15 times, and get my 12 or 15 points, but that’s not the makeup of this team because we got too many guys who can score. My job is to knock downopen shots and get guys the ball and get them going. I've had some games where I've gone 0-for-5 or 1-for-7, and I need to be able to help my teammates. On one side of the coin, yes, it does help my teammates, but on the other side my job is to pass the ball and get them going." ’’

(On his late three point shots) "The first one I had no choice, the shot clock was about to go off. I just took my time and it went in, that’s all. The second one I was shooting it all the way if Dirk was going to give it to me. I was just hoping he was going to give me the ball and give me that opportunity and that’s what he’s been doing all season, trusting his team mates. We made big shots but the big thing is we played defense down the stretch which gave us that opportunity to make shots down the stretch.

(On defense) "Our defense has won us games all year and we’re getting close to the next season so we’re tightening up our defense and make or miss, you have to be able to play defense in the playoffs."

(On Defense over the Season) "We're back to where we started where we were playing pretty good defense. Then we went through a lapse where we were just going to outscore people. You go through those during a season. But we understand what it takes to win a championship. The past champions, they all play good defense. Sometimes it’s not going to be pretty, but if you hold teams to 83, you’re going to win a lot of games."

(On Defense affecting Offense) "This is the way we were playing earlier in the season the last couple of games defensively, and that’s helped us offensively." 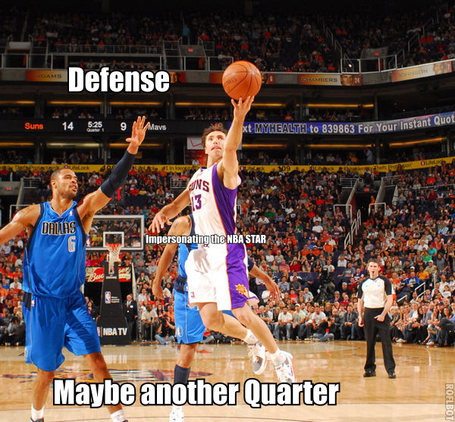 (On defense) "The last couple of games our defense has had to really step up and we’ve had to challenge ourselves. Tonight, shooting 38% from the field and still being able to beat a good offensive team and being able to hold them to 83 points is a huge accomplishment for us. We had to buckle down and understand what it was going to take for us to win and not just win now but what it’s going to take when it’s critical and that’s going to be our defense. [As] of late we’ve been out there communicating better and as long as we’re communicating it makes things a lot easier for us all. " 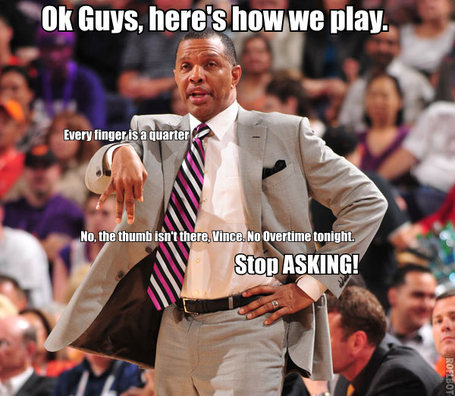 (On the Suns) "We played with great effort, I thought—did a good job and had a great start. We just weren’t quite able to maintain and then we couldn’t come up with shots at the end of the game. Dirk Nowitzki made a couple of really big shots. But more so than anything, he forces you to double him; he found Jason Kidd on a really big three. The effort was there, we just can’t quite offensively generate offense down the stretch. For us, that’s really where the game is lost."

(On the game) "At the end of the day, we got beat by a really good basketball team. If you look at their record and take away the six straight games they lost when Dirk Nowitzki was out, their record would be as good as anybody’s in the NBA. In order to beat that team, you have to play at a really, really high level—we were one for 16 from three; that’s not who we are. As I said, we did a great job defensively—at the end of the night, they shoot 38 percent. But we can’t find a way to generate enough offense to be able to win."

(On that lack of offense) "We just couldn’t come up with big baskets when we needed it. It’s tough to get a basket down the stretch when you don’t have a guy like Dirk Nowitzki to go to."

(On three-point shooting and the Moneyquote) "1-for-16 – that’s just not who we are. And contrary to popular belief, I don’t think you can defend the three-point line. We just missed shots." 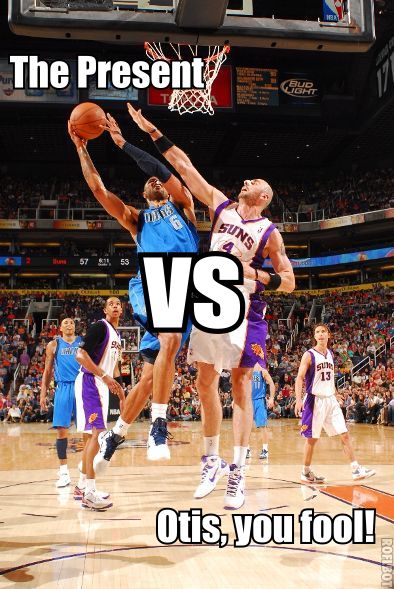 (On the game) "Tough loss, after this game I don’t think we’re going to be talking about playoffs this year anymore. To win a game like that, we’re going to need the whole team to bring energy and bring toughness, and a lot of guys today didn’t have really good nights, so we just got to play through it. Tough game, we were competing for 35 to 40 minutes and the last couple minutes we actually were not able to score enough and we gave up a couple of easy possessions on defense. "

(On defending Dirk Nowitzki) "I think Grant Hill did a tremendous job. He stopped him from the beginning and later on I tried to give him a little break and he had maybe two, three tough shots. I had maybe two, three good stops. He’s a very good basketball player and his high release is just incredible. You have a feeling you are going to block the shot and then all of the sudden it’s just swish, clean basket. Still, I don’t think Dirk Nowitzki was the problem today." 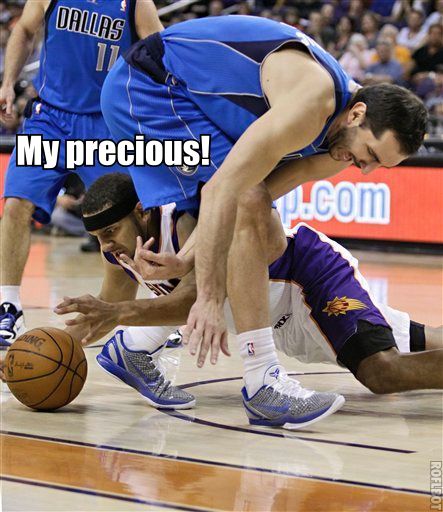 (On starting) "Just your approach, for me it’s a mindset coming in off the bench; I try to bring a lot of energy, try to be a spark. When you are a starter you just try to let it flow. You just take what the defense gives you. Defensively, I wanted to get up into (Jason) Kidd and pressure him and make their offense start farther out than they’re accustomed to. But at the end of the day you just have to play basketball."

(On poor three-point shooting) "It happens. Still out of the whole 82 (games), we can go (have a) 14 for 22 game one game. You very rarely see us go this bad. With that being said, I think it was a tie game with three or two minutes left. Defensively we got after it. (Jason) Kidd just hit two big shots and you tip your hat to him for making them." 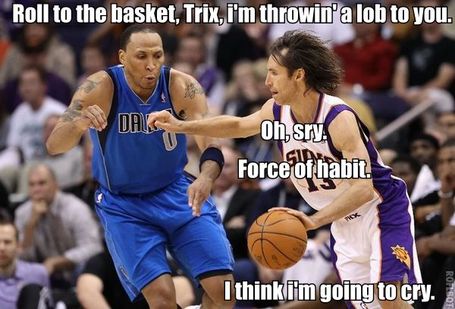 (On scoring) "I am having a hard time getting the ball in the basket right now. It has been a tough year. We are facing some pains right now because of the mountain we had to climb all year. I think we have to play with class and dignity and go on fighting every night. We fought pretty hard tonight. We didn't play great but we fought."

(Playoff race done?) "It feels like it’s over just because we haven’t played as well or won games. It’s disappointing, but it’s been disappointing all season."

The beginning of half number two was the Roddy B show... he sliced and diced and picked up three quick fouls.

Valley of the Suns White Flag

Alvin Gentry applauded his team for fighting hard and competing tonight against the best road team in basketball, but afterward Nash admitted a sense of finality has set in with his Suns.

odrigue Beaubois had quite possibly his worst defensive showing of the season, and his blunders in defending the pick-and-roll were enough to erase the memory of him bothering Monta Ellis. Tyson Chandler and Dirk Nowitzki were hardly excused from blame though, and honestly it’s hard not to fault any Maverick on the floor.

Haywood bricked nothing from the line because Phoenix has no scouting report he didn't get there. Celebration for our third-best Center, Beaches! [nsfw] 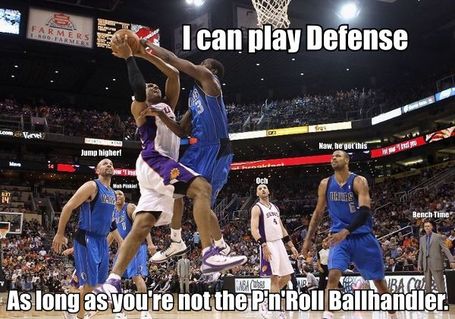 Disclaimer: If you couldn't tell by now, all italic sentences are made up thoughts, not actual quotes. Also, Sad Nash.

The Mavs (beat/lost to) [the Phoenix Suns]¹ tonight (thanks to/despite) Dirk’s Awesomeness. The (cloud in the silver lining/major culprit) once more as usual was the lack of support from his team-mates, with the exception of Tyson Chandler/Jason Kidd². Especially useless was Jason Terry's first three quarters/Peja Stojakovic/Brendan Haywood/Jose Barea/Shawn Marion's shooting/Rodrigue Beaubois's Defense³ and it is (GUESS WHAT) THEY’RE ALMOST NOT ALL USELESS!

² Only one of them, mind you. Two on Sundays.