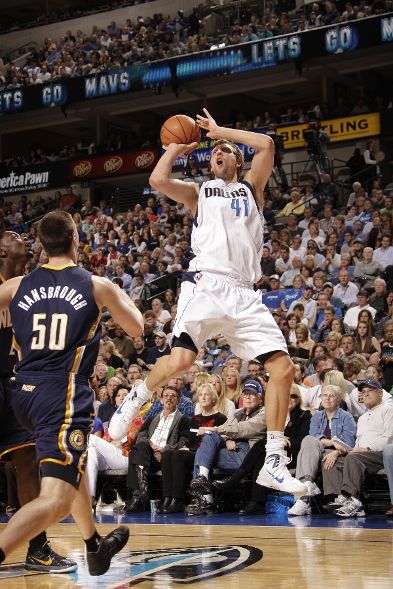 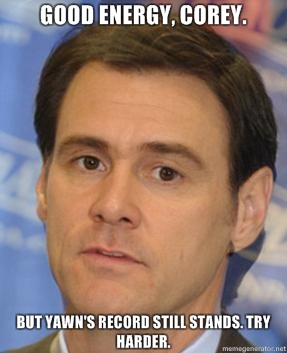 (On the Win) "Tonight kind of epitomized who we are. We’re a team that needs a lot of different components to play our best basketball."

(On Brewer) "I think I may have said, ‘Good energy.’ The one thing you know about him, when he goes in the game, you know he’s in there, particularly at the defensive end. And, look, it’s his first game and he just got off the plane yesterday. So, he’s playing his butt off, and he’s just aggressive and probably a little overaggressive. But he’s unlike any guy that we have, and that’s why we liked him and why I think he’ll help us."

(On the Finish) "We tightened the screws when we needed to the most. We certainly could have played better defense in the previous 45 minutes, I thought. I like the way we finished the game, but I thought we could have been better defensively through the first 40 or so minutes. We were searching a little bit all night. We held a lead, but I’d like to think we can play better."

(On Dirk and the Jason's) "We have three of the best closers in the game. We have to do it with a certain kind of balance, and I thought we did what we had to do tonight. Those three guys are going to give you the best chance possible." 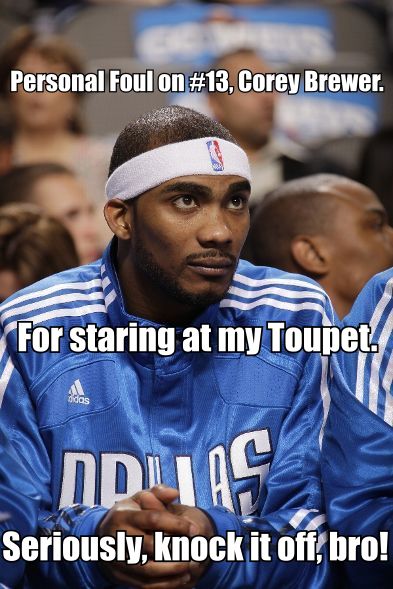 (5 Minutes, 5 fouls) "I gotta stop fouling, but I haven’t played basketball in a long time. It was just good to get back out there. I hadn’t played since the All-Star break, so it was good. It can only get better after that." 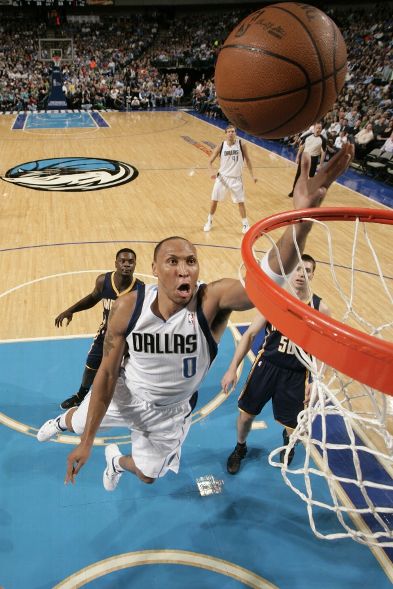 (On the Pacers) "They’re a tough, feisty team. They move the ball very well and they shoot the ball very well. They’re just not gonna go away. It was just one of those nights. They hit some tough shots. It's not like we coast on D. Nah. Nope. Never." 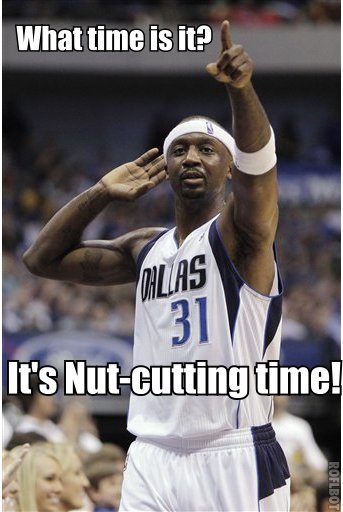 (On the Pacers) "It’s a tough team to play against. They remind you of the old Phoenix teams, and whoever catches the ball shoots it. And when you have that unpredictability it’s kind of hard to get your defense set."

(On the Mavs) "We’re playing offense very well right now. Defensively, our goal was to keep them under 100, and we didn’t get that done tonight."

(On the 4th) "In the fourth quarter, Coach looks for myself and Dirk. We do a good job playing off each other."

(On his late Jumper over Hibbert) "Nut-cutting time. That’s the best time of the game for me."

(On the 6th-Man Award) "That means a lot to me. It’s something I put out in all my summer workouts. It’s something I’ve been focused on ever since I won it my first year as a Sub. Last year, I finished second and that wasn’t good enough for me. It’s still on my mind."

(On the Fogafini next) "Back to the drawing board. We’ve got Memphis coming in here on Sunday, a team that beat us the last time we played them. It’s gonna test us mentally and physically, it’s gonna tell you a lot about your team, at this point in the season playing four in five nights. We’re gonna see what we’re made of, but I think we’re up for the task and we’re excited." 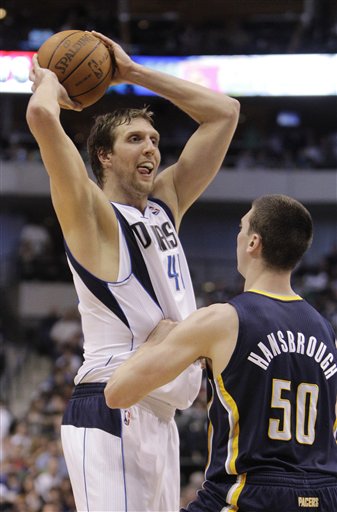 (On the 4th) "We were aggressive and attacking in the fourth quarter. That was good to see."

(On Terry) "He’s coming off the bench every night and giving us big baskets in the fourth quarter. He’s one of our closers. I can’t see anybody else taking that."

(On the Roster being deep) "Yeah I think so, we’re definitely deep and we can play many types of styles.  We’ve got length; we can go small so we’ve got a lot of options out there.  I think  Brewer is going to fit in nicely and we just got to get Tyson healthy and our defense has been slacking the last couple of weeks. We gave up almost 40 points tonight in the first quarter so we’ve got to look and that but we’ve got to be happy about how efficiently we scored the ball, how we’ve moved the ball and I think we’ve averaged almost 30 assists a game the last couple of weeks so we’ve got the keep that going."

(On the D) "Our defense was a little bit disappointing, especially there in the first quarter. We’ve got to address that and get some work done, but offensively, we’ve been really sharp, moving the ball. We’re sharing, we’re making shots, playing well off each other, so that’s great. But we’ve got to get better defensively, especially looking to the playoffs."

(On Mahinmi) "Yeah, we feel like we have a three-headed monster on the Center [spot]. Ian's been giving us all-out minutes everytime he comes in." 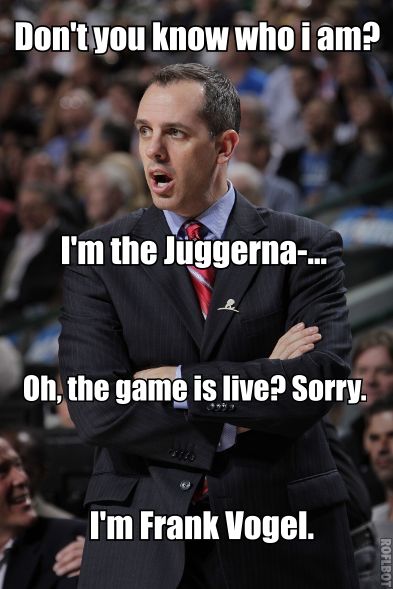 (On the Mavs Offense in the 1st Half) "We didn't defend well enough in the first half. They got off on us. They are an extremely explosive offensive team and we didn't do a good enough job in the first half. Our guys fought like they always do and made a game of it in the second half, but it wasn't enough."

(On the Mavs Offense in the 2nd Half) "We made them work. We wanted to make these guys work for tough shots, and I thought we did that in the second half. And they worked and they made really tough shots down the stretch. That's why they ended up beating us."

(On being a Playoff team) "We’ve always known there are ups and downs with the schedule. We're just battling every night. We believe a great deal in ourselves that we are going to make the playoffs."

(On Defense) "We have to defend better. Am I worried about doing better? Yeah. We're not winning games, so we have to do better."

(On how to defend the Mavs) "You not only have to execute your schemes the right way, but you have to do it with an extreme anticipation, because they all shoot the ball so well. They're such a great jump-shooting team. They executed us to death in the first half." 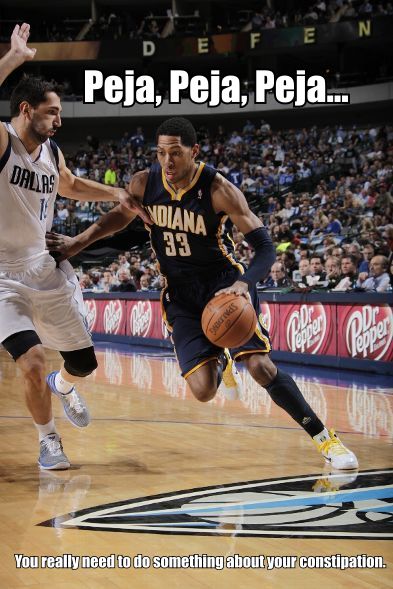 (On the Mavs) "They executed a lot of their sets to perfection. Down the stretch they made some big shots, Jason Terry and Dirk. Dirk only missed two shots the whole game, so that pretty much sums it up." 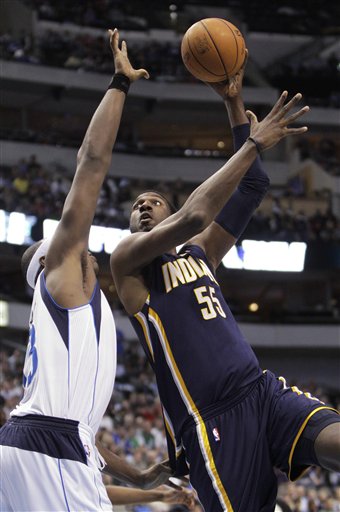 (On the Mavs) "They were moving the ball extremely well. In the huddles I was telling guys you’ve to make two, three rotations because they’re so good at working the ball around. And we didn’t get off the shooters; in transition sometimes we didn’t pick up known shooters and they burned us."

(On Indiana's declining D) "Something has to happen. It can't go back to how it was before when we were losing and being content with that. Something has to change defensively, and I'm a part of that, too."

Indy Cornrows Too much

The Pacers really played well tonight. This is the kind of effort that beats most teams tonight, but unfortunately, it happened to be a really good team. The Pacers played pretty average defensively. Collison struggled against Beaubois, but the Pacers really did a standup job on Nowitzki, he was just that good. Ultimately, despite costly turnovers and allowing 14 rebounds, there were two very clear instances the Pacers let this game slip away.

One was the midway stretch in the fourth quarter where Indiana could not get production to capitalize on Dallas’s cold stretch, but the quieter one is how poorly the Pacers closed the quarters. At the end of each of the three quarters, Dallas managed to cash in on the quarter’s final shots. That’s six easy points the Pacers handed Dallas, which ended up being key down the stretch. These little plays can build up and go to show how important closing quarters out strong are. Dallas worked for the final shots and got them. Indiana didn’t and therefore, were left off the scoreboard. Fix that one aspect, and this game could’ve been something else going down the stretch.

Even the 4th quarter dramatics were predictable.  The guest stars made a run that put the hometown boys in mortal peril.  As Darren Collison drained a three, the canned music swelled, the lead was down to three, and…act break.

Then, after hearing from some of our fine sponsors, the action re-started, the hometown heroes (in the person of Jason Terry) executed their usual derring-do, and the world was safe for democracy in time for the final commercial break.

And that’s all great – and very comforting – provided you’re the hometown heroes.  When you’re the foil, it just gets tired.

Haywood bricked None of NIL from the line. Maybe Indiana didn't get the memo to foul him. Celebration for our third-best Center, Beaches! [nsfw] 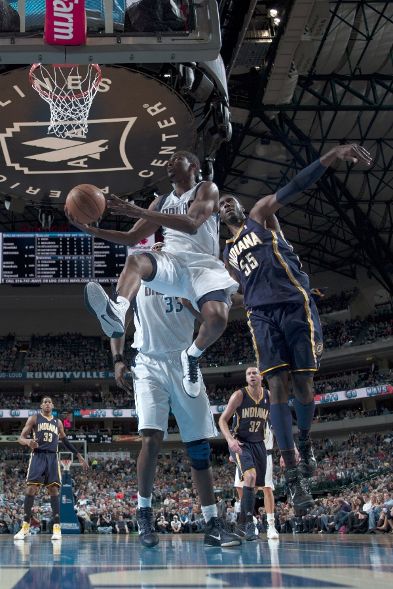 Disclaimer: If you couldn't tell by now, all italic sentences are made up thoughts, not actual quotes. Also, breaking news, the Mavs remembered to tie their shoelaces backwards and are subsequently on a 8 Game Winning streak. It's gotta be the shoes.

The Mavs (beat/lost to) [the Indiana Pacers]¹ tonight (thanks to/despite) Dirk’s Awesomeness. The (cloud in the silver lining/major culprit) once more as usual was the lack of support from his team-mates, with the exception of Tyson Chandler/Jason Kidd². Especially useless  was Jason Terry/Peja Stojakovic/Jose Barea/Shawn Marion/Brendan Haywood/Rodrigue Beaubois/Corey Brewer³ and it is (GUESS WHAT) THEY’RE ALMOST NOT ALL USELESS!

² Only one of them, mind you. Kinda lopsided...