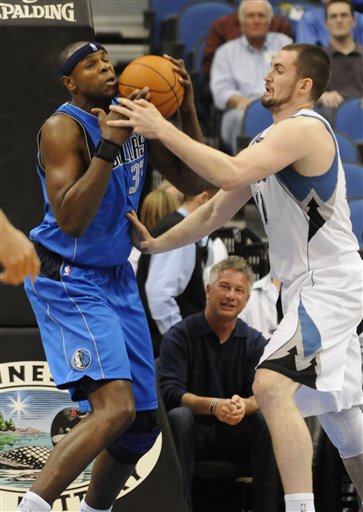 "On a second thought, i don't need this rebound, Kevin. You can have it, just don't hurt my belly, mmkay?" 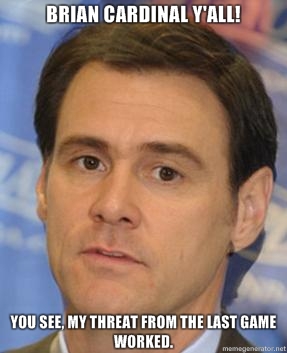 (On Love's record) "It’s an unbelievable accomplishment. There’s no doubt about that. I’d like to think we can shut him down tonight, but the way he’s going, he goes and gets the ball. And a lot of his scoring is pure effort of going and getting the ball. And so, it’s not as simple as taking away certain actions in their offense, stuff like that. A lot of it is just grit and a real sense for where the ball is going and then the tenacity to go get it and then make a play with it."

(When will it stop?) "It’s a joke that he’s doing it so easily. Unless he gets hurt, I don’t see anybody stopping it any time soon."

(On Kevin Love in general) "He reminds me a little of Dennis Rodman, a little of Charles Oakley, a little of Wes Unseld. All those guys treat every shot as if it's going to be a missed shot. They all have a knack for carving out space. He's unique. You don't see a lot of guys who pour out that kind of energy on every possession. It takes a different kind of dude to do that.''

(On Brian Cardinal) "Without Cardinal I don’t think we would have won the game. His activity, rebounds, loose balls, deflections and shotmaking completely changed the game around, because we were down. I don’t remember the last time he played significant minutes, it’s been awhile. So, for him to keep himself ready and go in there, make four threes, make plays defensive and just play the heck out of the game, it tells you what kind of a pro he is."

(On the 4th Quarter) "We caught a group early fourth quarter that got something going," Carlisle said. "We changed the lineup a little bit and I think the game slowed down a little bit. And we got more active, which we needed to." 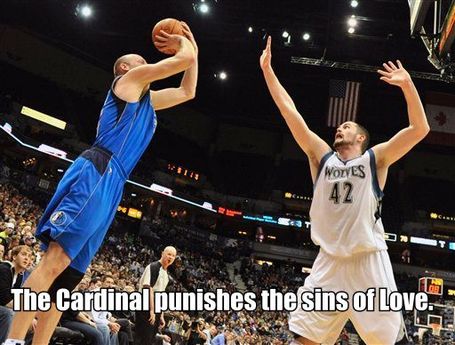 (On his Game) "Tonight, I was open a little bit on the 3-point arc and I was able to make some shots. It was exciting. We obviously never want to see Dirk get in trouble, but I think we have a deep team that can step in for people."

(On his return to Minny) "It was exciting to be out there playing. I've got a good relationship with quite a few of those guys over there and people within the organization. It was fun to go out there and play and compete against them." 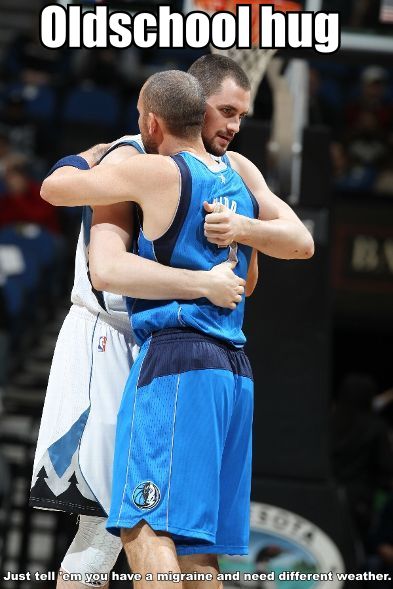 (On the Mavs) "We don’t panic, we’ve seen it all, being up one or being down two or three with a minute left. Terry probably didn’t have the best night. He’s been playing extremely well, he’s been off the charts. So, he had a down night, but it was up to him or Dirk to make a big shot and they did that tonight."

(On Cardinal) "He was huge for us, he won the ballgame. He changed the whole rhythm offensively and defensively for us. He gave us a spark and that’s what we’ve done. There’s always been somebody to come off the bench and give us life, especially on a back-to-back after a tough loss last night at home. So, he was huge. He got going there and had a couple of heat-checks, but that’s the beauty of the game. When you get going like that, you cheer your teammate on and he stepped up big." 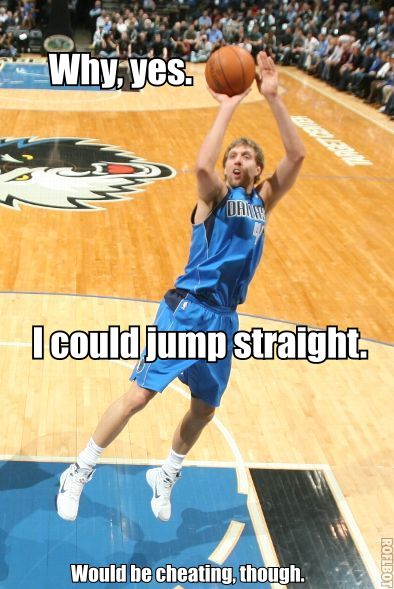 (On the Start) "It wasn’t pretty there for a long time. The first quarter wasn’t great. I mean, they scored 30 there in the first quarter and we had a slow start. We had a lot of good looks, but nothing seemed to drop."

(On his three to close the 3rd Quarter with a 7 Point Deficit) "It stopped the bleeding a little. I was in foul trouble all night and couldn’t stay out there long enough until the end. That was a big shot for us that kind of changed the momentum. Then we really picked it up at the beginning of the fourth, got the lead and never looked back from there." 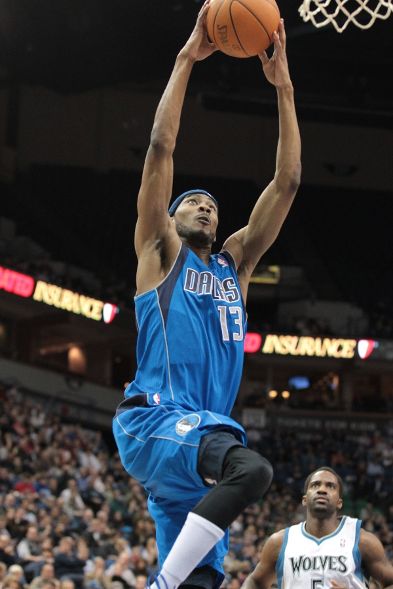 (On his situation with the Wolves) "I really didn't want to leave. The best-case scenario for me would have been to sign my extension [in Minnesota], but I didn't get one, so I am in a good situation and I am happy. I can't look back at the past."

(On almost buying his rented house from Casey, ex- Wolves coach and now Mavs Assistant) "I was renting. I almost bought Coach Casey’s house. But I changed my mind at the last minute. Something told me to hold off. Glad I did."

(On the Mavs) "This is great. Every night - and I've only been here two games - but every night is about winning.It's not just about winning with this team. It's about preparing to win a championship later." 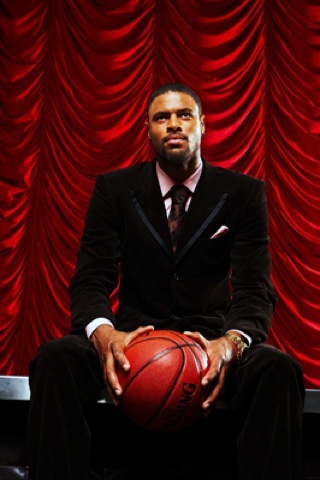 "I'm concerned with our Defense Dress Code violations by Dirk." 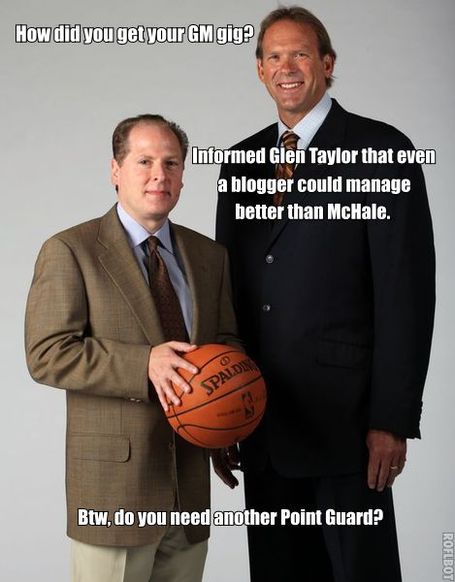 (On the Game) "The game comes down to the fact that they were able to make their free throws and we didn't. We stressed to the guys how critical those are even early in the game. It could be the difference in the game."

(On Beasley) "He hasn't gotten himself back in sync. He hasn't been consistent with it for a while. He's attacking the basket and he thinks he's getting fouled. These are things a young player has to play through. Whatever the referee calls or doesn't call, it doesn't allow you to get frustrated and stop playing. These are things we are working with our young players to work through. You just have to keep playing." 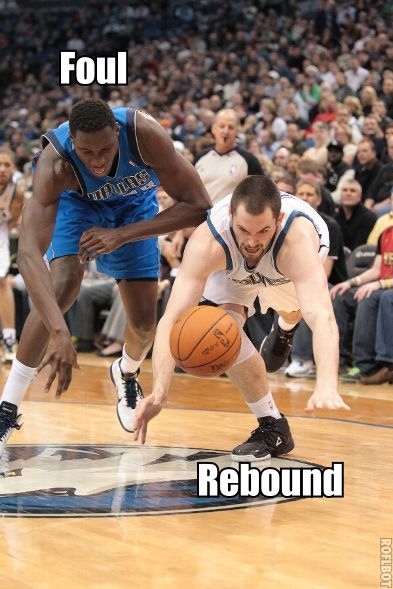 (On his Double-double streak) "I would be jumping for joy and ecstatic right now if we were winning and everybody was playing great, including myself. The streak is kind of an afterthought because we didn't win the game."

(On the moment he got it) "That was one of those moments where you pinch yourself to see if it's real. It felt great to see the crowd on their feet like that. I can't imagine what it's going to be like in here when we start winning and turn the corner. Well, i need to work on my imagination. A lot."

(On learning from the old) "It's always been fun for me to study old-school players. I'm a student of the game. I think it's important for young guys today to see tapes of players like that to help improve their rebounding."

(On the Wolves) "We can't keep taking one step forward and two steps back. Can we?"

TBJ Your Dad can really shoot

Man, you never told me your dad was such a good shooter. I mean, old guys never lose their jumper but Ol’ Brian was really stroking it last night. Pretty impressive. Killed the Timberwolves.

For the Mavericks, though, it is Dirk, who overcame foul trouble to do what he do. 25 points, 7/12 from the field, and perfect in ten attempts from the line. He's that aunt whose always bringing candy and toys to her nephew....he spoils Mav fans.

The Mavs got away with a game they likely should have lost, but there was certainly an element of predictability here: the team of stable vets out-executed a crew that has made a routine out of fourth quarter implosions.

The fact remains that it's nearly impossible to distinguish between clutch shooters on the basis of past performance because players simply do not get enough opportunities to take these shots.

Over time, it's possible that could change. With each passing year, for example, the evidence that the Dallas Mavericks and New Orleans Hornets are uniquely capable of winning close games becomes stronger. This remains true despite Dallas' one-point loss to the Memphis Grizzlies on Sunday courtesy Zach Randolph's game-winner with 0.3 seconds remaining. The Mavericks are 16-8 in games decided by five points or fewer this season; the Hornets are 11-9. My working theory notes that Dallas and New Orleans are two of the few teams in the league that primarily rely on the pick-and-pop late in games, leaning on the shooting ability of power forwards Dirk Nowitzki and David West. Maybe everyone in the league should be running pick-and-pop down the stretch?

Haywood bricked One of 3 from the line. Celebration for our third-best Center, Beaches! [nsfw]

Beaubois had five Freethrows yesterday and is therefore over his Cap for March. 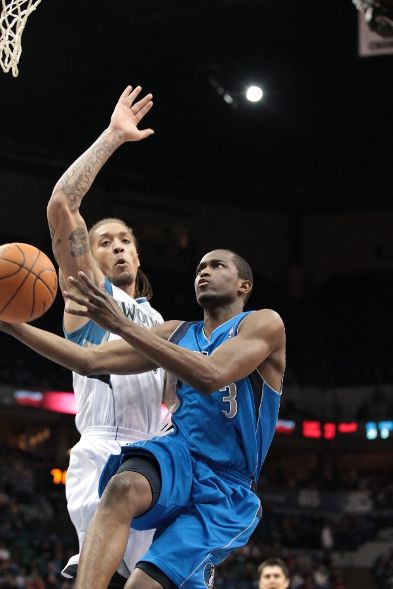 "You know, If you weren't that lazy, you'd already watershopped this pic. Fo sure"

Disclaimer: If you couldn't tell by now, all italic sentences are made up thoughts, not actual quotes. Also, breaking news, somebody tied the Mav's shoelaces backwards and they are subsequently on a 1 Game Winning streak.

The Mavs (beat/lost to) [the Minnesota Timberwolves]¹ tonight (thanks to/despite) Dirk’s Awesomeness. The (cloud in the silver lining/major culprit) once more as usual was the lack of support from his team-mates, with the exception of Tyson Chandler/Jason Kidd/Brian Cardinal². Especially useless was Jason Terry/Peja Stojakovic/Jose Barea/Shawn Marion/Brendan Haywood/Rodrigue Beaubois/Corey Brewer³ and it is (GUESS WHAT) THEY’RE ALMOST NOT ALL USELESS!