With Defense Being the Key, Have the Mavericks Improved?

Share All sharing options for: With Defense Being the Key, Have the Mavericks Improved?

As the regular season has only three weeks left and the playoffs are inevitably approaching, people seem to ask more frequently what has changed for the Dallas Mavericks in comparison to last season. Which improvements are really tangible to give the fans certain hints that the team is finally up to a deep playoff run?

Their struggles in recent years raised many doubters. And at first glance they may have a point. Let's go with the defense in this one. Despite acquiring Tyson Chandler this offseason, developing an historically efficient zone defense and the commitment to defense in general, the numbers just won't show any big step forward. The Dallas Mavericks give up 41.6 Points in the Paint per game. Just like last season. They slightly improved in giving up 45% shooting compared to 45.7% last season and they do allow 96.2 Points per Game compared to 98.6 which is due to the fact that they play a slower pace this season. Fewer possessions mean fewer possibilities to score for the opponent ... and less points. Even the defensive slippage starting with January has returned: 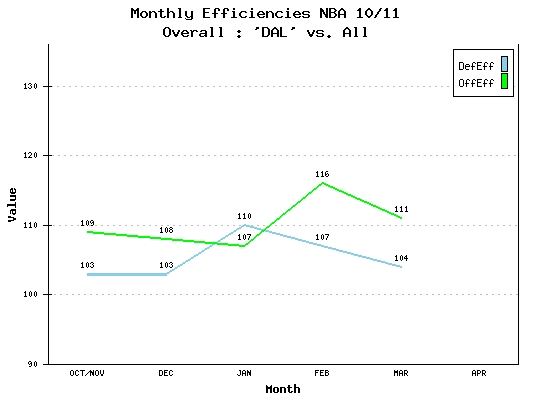 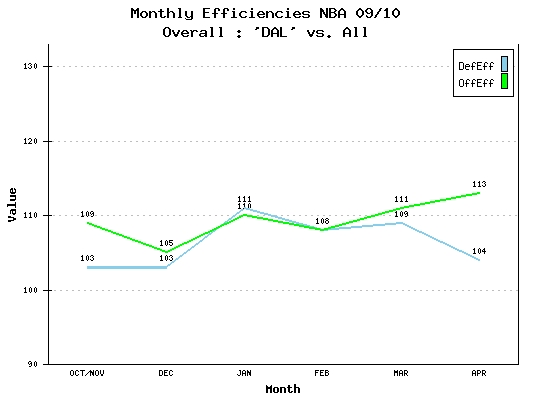 The graphs show the defensive and offensive efficiencies over the course of this and last year's season. Efficiency is points allowed/scored per 100 possessions and is a more accurate value to determine a teams performance than just Points per Game, for example. As you will notice, the Mavs started out posting good defensive numbers in both seasons but dropped pretty hard in January and really never got back to early season standards.
They have climbed the Defensive Efficiency rankings lately because of a favorable schedule, but ranked 12th before the current win streak. Last years rank: 12th.

So? First round exit? Another wasted year? 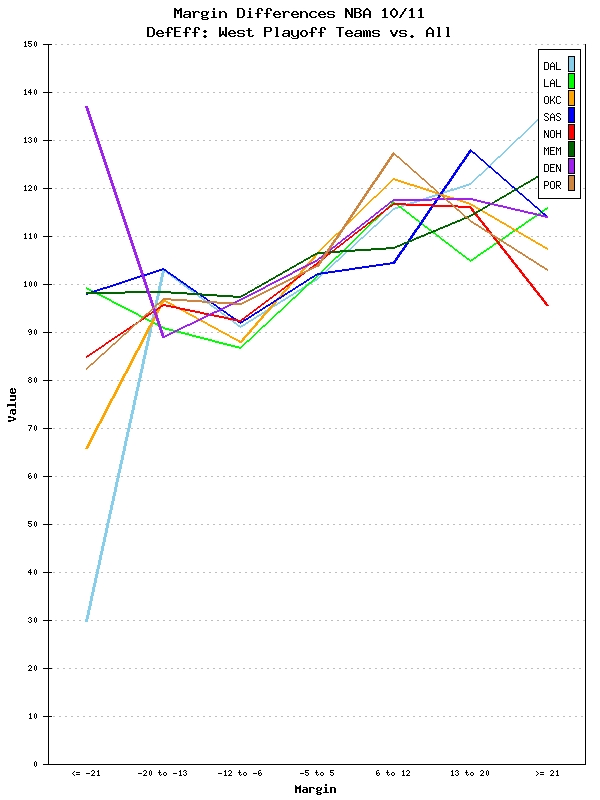 Mark Cuban mentioned earlier this season that their lack of focusing for 48 minutes is what separates them from being a championship-caliber team. By watching the games you can only agree. Especially when leading by a decent margin, the team seems to flip a switch and turns into a group of individuals that has no interest to put any effort into the game. They never really got away from blowing big leads this season with arguably the best example being a three game stretch that started on December 9th. The Mavs held at least a 20 point lead in each of those home games, but all opponents were able to come back which eventually resulted in a very unnecessary loss to Milwaukee and the termination of a 12-game win streak. Add to that the fact that the speed of some comebacks the team has allowed is rather unsettling.
The chart shows the Defensive Efficiencies for all current West Playoff Teams when they are leading or trailing by a certain margin. As you will notice there is a natural tendency to let down if leading big. But the Mavericks seem to relax the most. They own the best efficiency in close game situations (-5 to +5) with 101.03, but the defense literally evaporates on bigger leads. From 115.53 (6 to 12) to 120.86 (13 to 20), which is the second worst value upon this group, to a shocking 136.0 when leading with 21 or more. In fact, the Mavs are the only team upon this group where the efficiency steadily grows with the lead.
On the other hand: the Mavericks are clearly one of the better teams defensively in close game situations or when trailing. So is this really that worrisome? Wouldn't you rather have a team that relaxes a little bit too much when leading but is among the best when it counts?

In the next parts we will dig deeper and look into those close game situations in which the Mavericks apparently are among the best. Are there improvements compared to last season and if so, what could it mean regarding a potential deep playoff run?