Share All sharing options for: NBA Playoffs 2011: How Shawn Marion Could Help the Mavericks Solve Their "2nd Option" Dilemma

It has been an issue for quite some time now. The inability of the Mavericks organization to support Dirk Nowitzki with a reliable sidekick who can create his own shot. In the last few days analysts have again pointed out that fact extensively and brought up the opinion that the Mavericks therefore will struggle to come out of the first round. I myself used numbers from SynergySports to verify that case. Partly because I am a fan and so of course do believe that we will be able to come out of the first round. But also partly because most of the argumentation is based upon the fact that Jason Terry is our second best player. And I think he isn't. I said it on Wednesday in the second part of my "In and Outs." It is Shawn Marion. Jason Terry is only our third best player. Not in scoring, but in creating his own shot.

First I tried to figure out what "creating your own shot" really means. SynergySports has different categories of offensive plays and for each category they list the Points per Possession value. I think that only two categories really match that term: "Isolation" and "Post-Up." Of course there are other ways to score in crucial game situations, but if you just give the ball to your Go-To-Guy and let him handle stuff these categories fit the bill.

I assumed that the three players with the highest scoring average of each team could also be considered their 1st, 2nd and 3rd option in crucial game situations. When it was close (within 1-2 PPG) I chose the better player in the above categories to represent their team. That led to Brandon Roy replacing Wesley Matthews, Emeka Okafor replacing Trevor Ariza, J.R. Smith replacing Danilo Gallinari and Ty Lawson replacing Arron Afflalo. 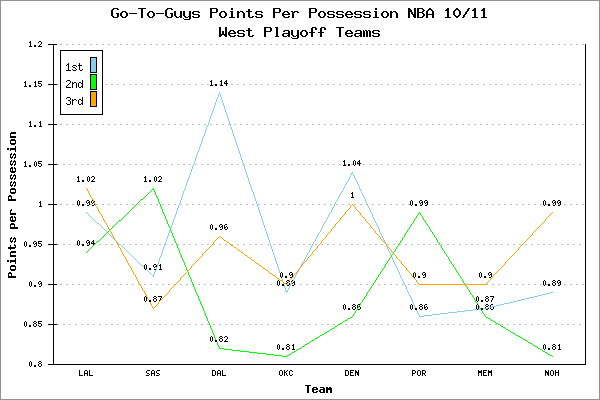 That might look weird because the 1st Option doesn't always top the 2nd Option and so on. I declared the first option to be the player for whom the most "Iso" and "Post-Up" plays were run so far. That doesn't necessarily have to be the player that's best in the categories in terms of Points per Possession. In fact, only Dallas runs the correct amount of plays for their players in terms of efficiency in creating their own shot. The most plays for Dirk, second most for Marion and third most for Terry. Also mentionable is that Marion tops every other teams 2nd best player in terms of Points per Possession despite Kobe Bryant (Lakers) and Ty Lawson (Nuggets). Let's combine the 1st and 2nd options: 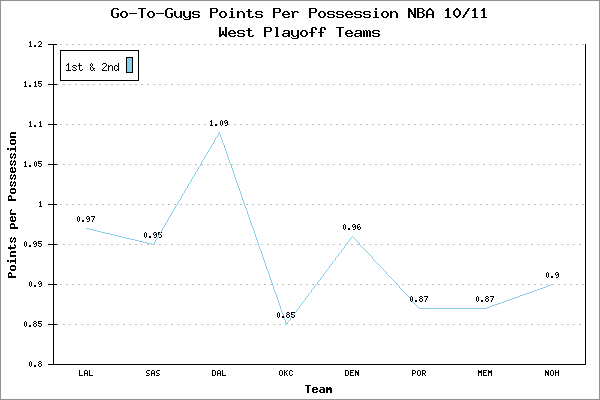 Thing is: You could argue that I am missing the point here. Of course Dirk shines as a Go-To-Guy among Go-To-Guys (and so does Marion with him as our 2nd Option), but the question is what will happen to the team if he is shut down? 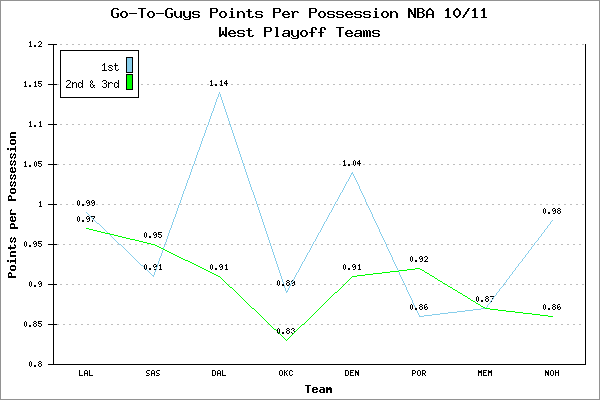 Here we have the first option again and teamed up the 2nd & 3rd Option. Terry and Marion will combine for 0.91 Points per Possession while creating their own shots. There is only one team which owns a 1st and a 2nd/3rd option that is better than our 2nd/3rd option in terms of Points per Possession: The Lakers. Of course the drop-off from 1.14 Points per Possession to 0.91 is huge, but that's because of the brilliance of Dirk and not because all the players behind him are useless. Here is exactly where I disagree with the fact that Jason Terry still is the teams second best player. He is averaging 0.82 Points per Possession while creating his own shot. That would be pretty awful for a second option. You have to give the coaching staff a lot of credit. They probably knew we most likely won't end up with a legit sidekick after the trade deadline. What they did was giving Dirk less touches in the regular season. That fact was well criticized in close games where it seemed like they refused to run a play for him. What they wanted though was to see if another player will show up and Shawn Marion did. And because he is averaging 0.97 Points per Possession and gets more touches than Terry, the teams 2nd and 3rd Option do look pretty good.

They have shown the confidence late in the regular season to run their offense through Marion and it wasn't a coincidence. Only thing to look into know is how often the teams rely on their 2nd and 3rd Option in comparison to their 1st. 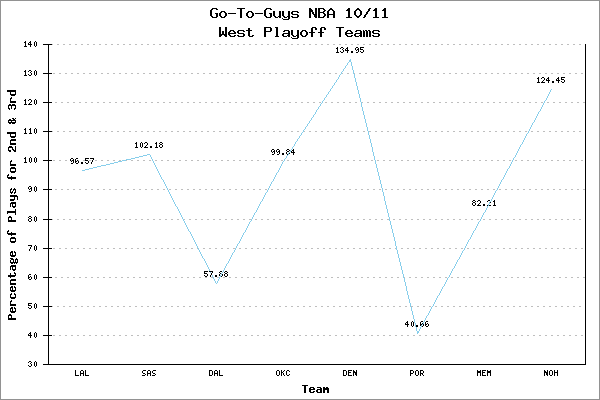 That's really the only thing you could criticize. They still rely on Dirk way too much. Dirk gets nearly twice as many touches to create his own shot than Marion and Terry. Only team that's worse in this department is Portland. But it's due to the fact that their 2nd and 3rd Options are Wallace and Roy. Wallace has been added to the team on the deadline and Roy was injured for a long time. That's why Aldridge had to carry most of the load.

I'll add an interesting observation from the Eastern Conference. I covered only the West here but will now show you the Bulls (Derrick Rose, Carlos Boozer and Luol Deng) numbers: 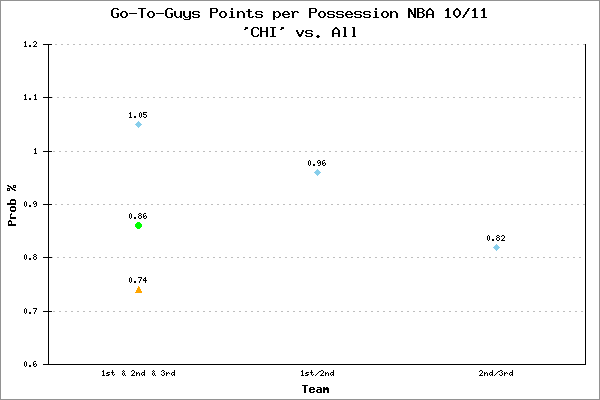 All these values are worse than the Mavericks. But what's more important: At the end of the day they are stuck with a 2nd/3rd option that scores 0.82 Points per Possession. A Jason Terry. A player that, according to the media, isn't possibly enough to win you any game when your first option is shut down. But while the Mavs will struggle in the first round because they have no options behind Dirk in creating their own shot (0.91 Points per Possession), the Chicago Bulls are legit contenders with 0.82 Points per Possession behind Rose. It's a strange world don't you think?

I know doubters will say that in the playoffs everybody despite Dirk will fold again and you surely have to be careful if Shawn Marion really can take pressure off Dirk down the stretch. The Lakers and Spurs in example have proven themselves in many playoff series. Marion hasn't done this for the Mavs yet. That's why they still have to learn to rely on other guys but the numbers show that it could be possible.