In the ongoing series between the Dallas Mavericks and the Portland Trail Blazers both 4th Quarters made the difference for the home team so far. The Mavs led by 4 and 1 going into the last period and outscored Portland by 15 during the first two games. While they had to overcome a 6-point deficit midway through the 4th in the first game, the second one never was in doubt. A Peja Stojakovic three with 8:25 left put the Mavs up 83-75 and Portland never pulled back within one possession. Dallas also held their ground under the basket grabbing 78.95% of the defensive and 28.56% of the offensive boards. 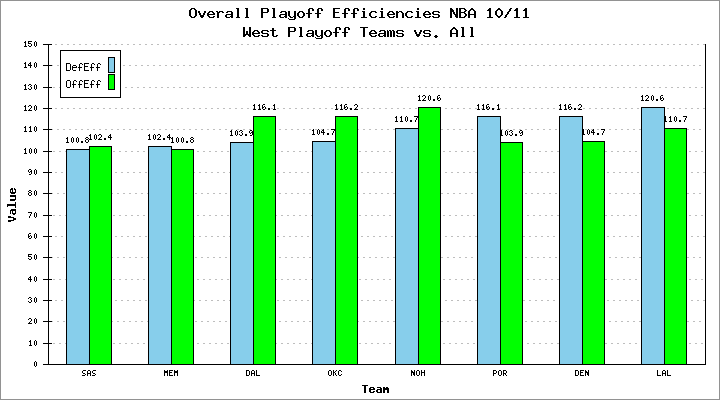 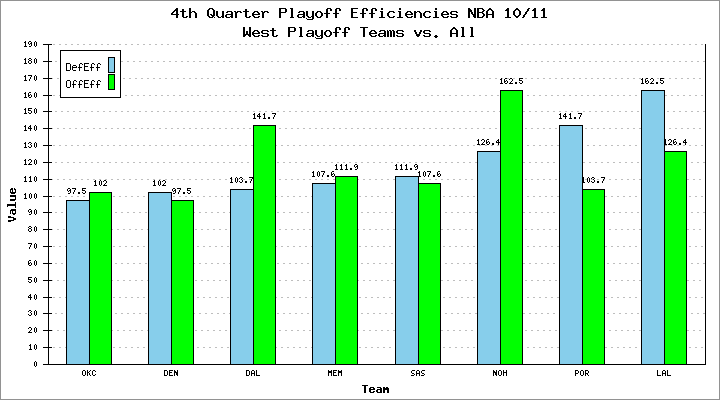 Here is a comparison between the Overall and 4th Quarter Efficiencies in the series of the Western Conference. Over both games they hold a huge Efficiency Differential of +37.95. Only the Chicago Bulls have a better Differential in the 4th, but weighting in the quality of the opposing teams, Dallas is the best 4th Quarter performer in this young postseason so far.

How did it happen? In both games Dallas were able to take over behind Dirk Nowitzki while LaMarcus Aldridge became more and more invisible late in the games.

You'll have to ignore Brian Cardinal and Rudy Fernandez because they barely played. As mentioned Dirk took over. For Portland not Aldridge but Miller produced at a the highest level. Aldridge's overall PER in this series is 24.2 and Wallace's 11.73. Both could not even keep their production in the 4th Quarters. Wallace had 2 Field Goal Attempts in Game 1 in the 4th and while he had a much better overall game on Tuesday, he failed to take a single shot in the fourth. And that being covered by Peja most of the time. On a side note: I think that quarter was the best Peja has played in a Mavs uniform. Wallace wasn't able to fight through screens and challenge his shots on the offensive end and he also was very active on defense. Especially on denying Wallace the ball. Here are the sortable 4th Quarter Stats for both teams:

The player with the most Field Goal Attempts is Nicolas Batum and Andre Miller leads Aldridge in points. Also worth mentioning is that Portland was forced into a lot of threes. The lack of outside shooters let Dallas crowd the paint and wait for Portland to make their shots. They didn't.

So Portland so far is unable to get the ball to their premiere guys. On one possession during Tuesdays 4th quarter, Jason Kidd was guarding Aldridge on a switch and Portland was not able to get him the ball to work the mismatch. That pretty much sums it up.  Dallas will continue to give Portland the outside shot until they prove that they are able to make them. You should keep an eye on Wesley Matthews here. He is their best 3-point shooter, attempts 4.6 per game and hits them at 40.60%. He now has attempted only 3 total in both games.

Anyway: Portland has to make major adjustments or they should hope to lead big going in the fourth quarter because in the first two games it didn't look like they had a clue how to beat the Mavs late in the game.