Going into the postseason one of my bigger concerns was the starting unit of the Dallas Mavericks. In particular the 2-Guard spot. While the last games of the regular season are normally used to strengthen the rotation and to build chemistry within the starting group, the Mavs had yet another change in this crucial unit. Rodrigue Beaubois was replaced by DeShawn Stevenson in the last game before the playoffs. That change would have been made anyway regardless the injury of Roddy according to Rick Carlisle. It made sense back then because of the struggles of Roddy in that lineup and because of the matchup challenge that the big backcourt of the Portland Trail Blazers provides. Over the first three games of the series though, the move hasn't paid off. These are the values of the 3 most frequently used lineups in the series against the Blazers so far: 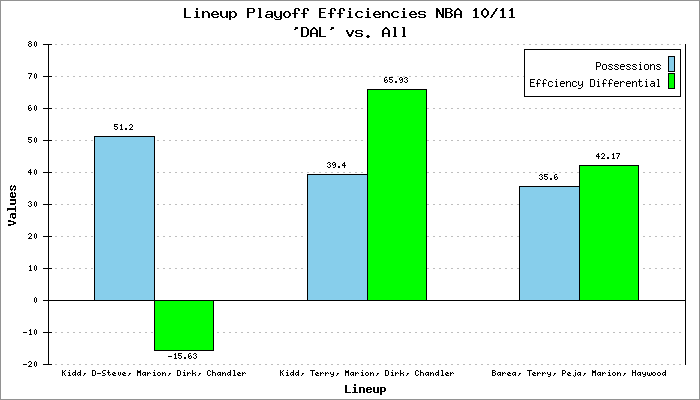 The starting unit has been used for 51.2 possessions. That is one-fifth of all the possessions played in the series (249.70). The unit averaged an Offensive Efficiency of 91.85 and a Defensive Efficiency of 107.48. That's -15.63. The Assist/Turnover-Ratio is 0.91 and the rebounding numbers are also not convincing. The unit has been outscored by Portland 47-55 and it lasted for 3 minutes in last nights game as it could not withstand the opening possessions of Portlands playoff home debut.

Replace Stevenson with Terry and it's another story. The Offensive Efficiency is 154.37 compared to a Defensive Efficiency of only 88.74. This unit outscored Portland 61-35 over the three games. Assist/Turnover-Ratio: 2.75 with great rebounding values. Also 68% of the Field Goals are assisted. The bench lineup with Marion being the only starter on the court looks way better, too. The Mavs especially seem to struggle finding an offensive rhythm within their starting unit so far. Stevenson is not a factor at all (Playoff-PER of 3.25 so far), but I am more disappointed with their inability to get Marion involved. Gerald Wallace is a good defender but you won't find out whether Marion could be a factor if he doesn't get touches. Because they don't run plays for Tyson Chandler as well the starting unit is dependent on Dirk Nowitzki and the ability of Jason Kidd to knock down threes. That's too little. With Terry in the lineup or Peja or Barea the offensive options multiply and the team performs better.

The problem is the lack of alternatives. Even with this knowledge there is not much Carlisle can do about it. Terry won't likely start although it seems worth a try right now and even a healthy Roddy is not the type of player you need against Portland. And I think we won't even discuss the possibility of Brewer joining the starting lineup. Only positive is that Roddy had two of his better games against Portland this season, so I personally would be tempted to give him a shot once healthy.

But bottom line is: Probably the Mavs will have to win this series without a great starting unit and hope that the major lift continues to come off the bench.