This series has been a hot commodity in the playoff bracket and now that 5 games are in the books lets start our very own edition of MythBusters and see which assumptions proved to be right or wrong so far.

1. Blazers in 4 or 5 or 6
Blazers led the votings for most probable upset and many experts picked them in 6. Some even went for 4 and 5. And yeah ... it's gloating. But anyway: BUSTED!

2. The Trail Blazers backcourt will severely outplay the Mavericks backcourt

I indeed tend to give Portland the edge here. Not sure about "severely" but they scored more points, shot on a higher percentage and went to the line more frequently. Despite fouling a lot more their PERs are considerably higher and I think there is no doubt that especially Barea has no chance on defense despite flopping. Only edge that Dallas backcourt holds is WinShares. Still: CONFIRMED!

3. Dallas will only win the series if Dirk Nowitzki plays his best ball

Compared to the last 3 seasons, shooting numbers are down, he averages fewer rebounds, blocks and assists on a per game basis. It also is his lowest PER since 06/07, the year in which Golden State happened. He went to the line more frequently, but overall he hasn't reached the peak yet. The Mavericks are still on their way to win the series but you could argue that Dirk has to step up one more time to close this thing out. So: PLAUSIBLE!

4. The series is as competitive as the 3-2 outcome would indicate

http://www.hoopdata.com has this (High five to DOH who posted that in his Post Game Quotes):

Dallas takes a 3-2 lead back to Portland, knowing they've been pretty dominant in this series outside of the fourth quarter collapse over the weekend. In fact, if you take that quarter out of the series, Dallas is up 442-398 over 19 quarters, which pro-rates to a 93-84 standardized win. That's just a bucket off tonight's 93-82 final. What you saw tonight was a fair representation of the series to date outside of the outlier quarter. 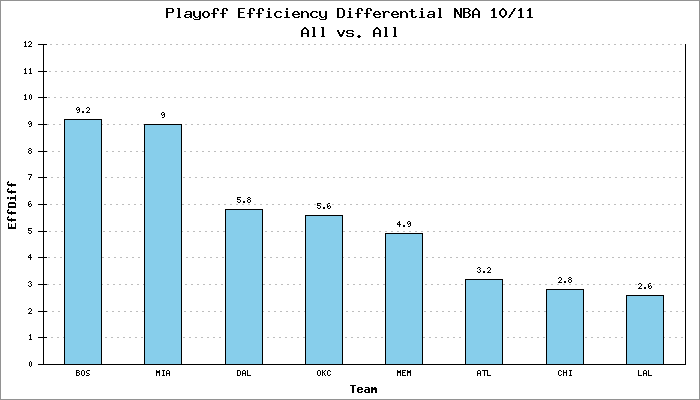 In the West Dallas is second in Defensive Efficiency behind the Grizzlies, third in Offensive Efficiency behind the Lakers and the Thunder and first in Efficiency Differential, as you can see above. This would indicate that this is one of the more one-sided matchups in the bracket thus far.
This chart is somewhat funny anyway. Think back to the start of the offseason. The Knicks, Nuggets and Portland were granted the best chances of an upset. Boston has already swept the Knicks, the Thunder are leading 3-1 and Dallas, despite having the smallest advantage right now, leads the West in Efficiency Differential. Memphis and Atlanta, who were supposed to be beaten by Orlando and San Antonio are 5th and 6th on that list. Meanwhile two team that should be already resting by now have/had their hands full with Indiana and the Hornets and are 7th and 8th. Only the Heat seem to roll as predicted. 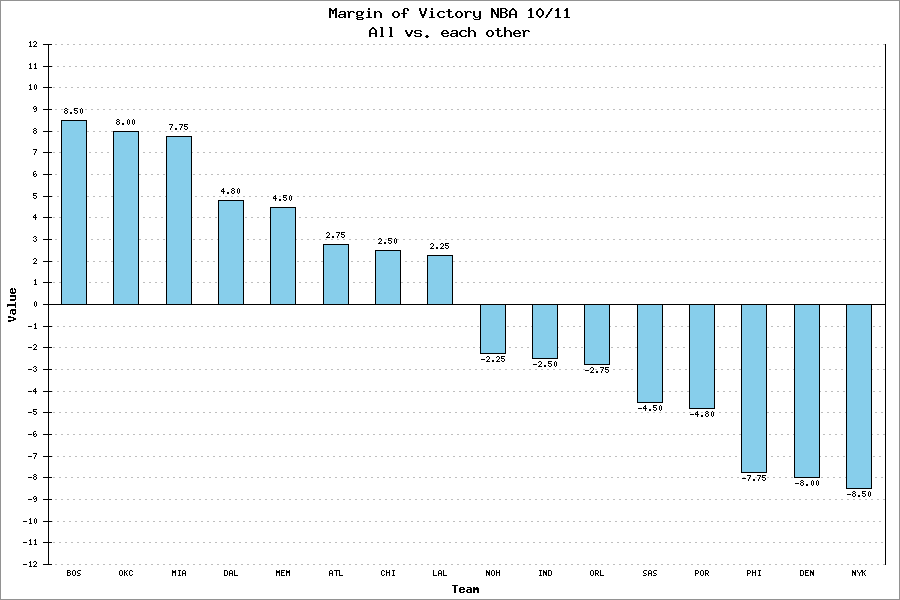 The Margins of Victory in the Playoffs tell the same story. Dallas is 4th, has won their games with 8, 11 and 12 and lost by 2 and 5. That's pretty convincing. I'd say despite Game 3 the Mavs have dominated the series. They had their struggles in Game 1 but considering that the Lakers, Spurs and Magic all dropped their first game they should be glad to have won no matter how. And in the end Portland wasn't able to close out Games 1 and 2. Then the Mavs went on with consecutive double digit leads in Games 4 and 5. Of course everything is overshadowed by the 4th Quarter collapse in Game 4, but let's be honest: This series should be over by now. BUSTED!

5. Mavericks have the deepest rotation in the playoffs

Dallas plays 9 guys regularly. That was about to be expected. They are 2-deep on every position despite the Power Forward spot. But other teams do that as well. Among the Big 6 Dallas and the Spurs are the only teams not playing an eight-man rotation, but most of the lower seeds go at least 9-deep as well. The more interesting number is the Lineup Usage anyway. Higher percentage means the team was more hesitant to use other lineups outside their core units. Lakers and the Celtics top the list while Knicks, Spurs and the Nuggets use the widest range of different lineups. Speaking of Dallas, they are in the middle of the pack.
The numbers are influenced by injuries and foul trouble because teams have to play other guys with their main players sidelined. Knicks numbers in example could be a bit boosted because both Amare Stoudemire and Chauncey Billups have been limited in the series, but nevertheless Dallas is clearly not using the deepest rotation in the playoffs. BUSTED!

6. X-Factor Watch
Obviously Corey Brewer didn't get minutes so far. So he gets a BUSTED! right off the bat. But it's really more that there wasn't a real spot for him to show what he's capable of doing.
Peja Stojakovic and Jason Kidd both raised their PERs in comparison to the regular season: Kidd +8.0 and Peja: +2.3. And both are shooting a higher percentage (Kidd: +16.60% eFG; Peja: +6.60% eFG). They cooled off from 3-point territory in the last 3 going 10 of 31 but really helped the team in their 2 home games to start the series. CONFIRMED!

If you are interested in more statistics before and after the Mavericks games, join me on twitter: @j0Shi_f