With Defense Being the Key, Have the Mavericks Improved? (Part II)

Share All sharing options for: With Defense Being the Key, Have the Mavericks Improved? (Part II)

In the first part of this 3-piece we've learned that our Dallas Mavericks may not have made that big step forward defensively, but also that their main problem results in a lack of focus when leading big.

For the playoffs you could make the case that this might not be too decisive because playoff games are close games anyway. We'll first look into the Clutch Efficiencies. 'Clutch' is defined with 4th Quarter or Overtime, less than 5 minutes remaining and neither team ahead by more than 5 points. 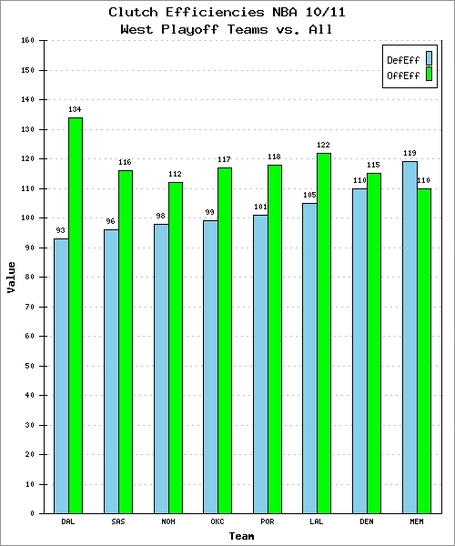 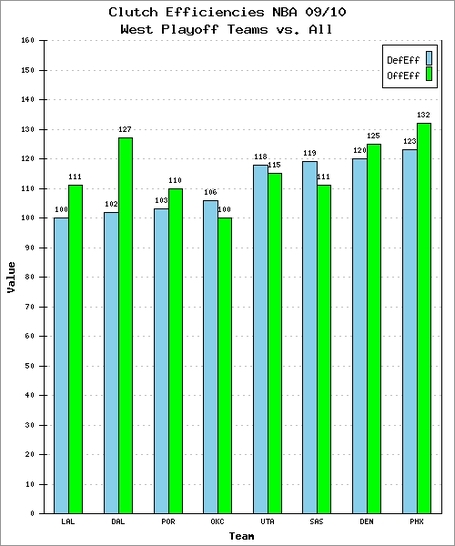 You see the rankings ordered by Defensive Efficiency for both seasons. I trimmed it down to West Playoff Teams and rounded the values to keep the amount of data and the image size manageable.
So what you therefore can't see is that the Mavs are not only leading this group but the entire league in both Defensive and Offensive Efficiency in the Clutch this season. And they improved from 102 to 93 on the defensive end, which, in the world of efficiencies, is huge. 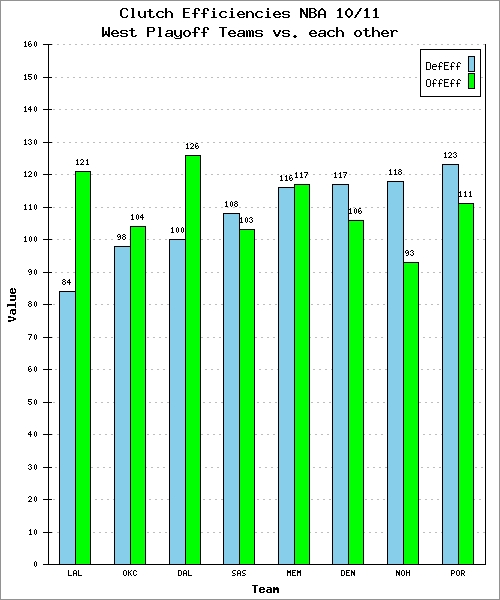 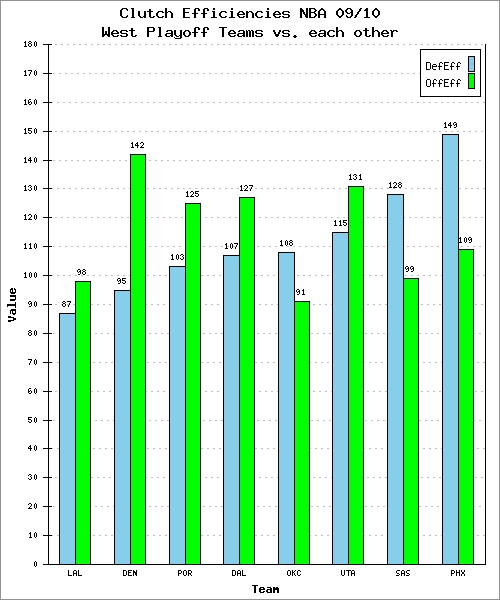 Here we've limited the data to games played between the Conference Playoff Teams because those are the teams the Mavs will have to deal with throughout the first three rounds of the playoffs. The team improved in this rating as well. From 107 to 100 in Defensive Efficiency compared to last season. Their Overall Rating is better though and the recent struggles against future playoff foes is a major criticism the team recently had to deal with. Since their win against the Los Angeles Lakers on January 19th, they lost 7 straight against current Western Conference Playoff Teams. And in 5 of those games Clutch-Play was decisive as they were decided by 5 points or less. Their record against all other teams in that stretch is 21-2.

This basically raises the question which Clutch Rating is better to predict future playoff success. The Overall Rating or the one where you limit the data to games between Conference Playoff Teams?
Over the last four seasons, in which the Mavs have had their struggles in the playoffs, the team with the better Clutch Defensive Efficiency won 37 out of 60 playoff series. Only 28 of 60 were won by teams that held the advantage in the Conference Rating. In fact, both systems have predicted the correct team to advance in 24 playoff series and both failed in 19. In the remaining 17 (where the two ratings picked different teams to advance) the Overall Rating holds an advantage of 13-4 over the Conference Rating.
This may be surprising, but it really is not. I'd like to mention the 'Margin-of-Victory' (MoV) debate. I won't specify the details right now because that would go beyond the scope of this article, but it basically says that you will have greater playoff success if you hold the advantage in MoV throughout the regular season even if you are not successful against the better teams. Look at the Miami Heat this season. While they own the second best MoV in the league, they hold a devastating 1-9 record against the other teams of the Big 6 (SAS, LAL, DAL, BOS, CHI).

So lets sum it up: The Mavs indeed improved in a specific category of close game situations that will surely matter in the playoffs: The 'Clutch'. Add the fact that their recent struggles against future playoff foes might not be too decisive for their playoff prospects and you can be pretty confident, can't you?

The Clutch Efficiency Rating grants the Mavs a chance of 61.6% (37 out of 60) to win a playoff series. This surely looks promising, but over the last four seasons they lost 3 out of 3 playoff series and were 1-4 in playoff games decided by 5 points or less when they held the better Clutch Defensive Efficiency. This includes last years series against the San Antonio Spurs and that is why you could easily argue the fact that a decent ranking will change anything for the Mavs in the playoffs this year.

In the final part of this piece we will not only look at the Clutch but at close game situations in general and examine if this furthermore confirms the improvements the Mavs probably made. And we'll come to a conclusion if there are indications that, in terms of Defensive Efficiency, another early playoff exit can be avoided.