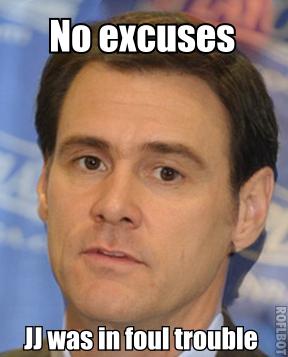 (On the game) "No excuses, we’re not gonna make excuses. Our first half was poor, we knew that, we battled back in the second half, but they were better tonight." 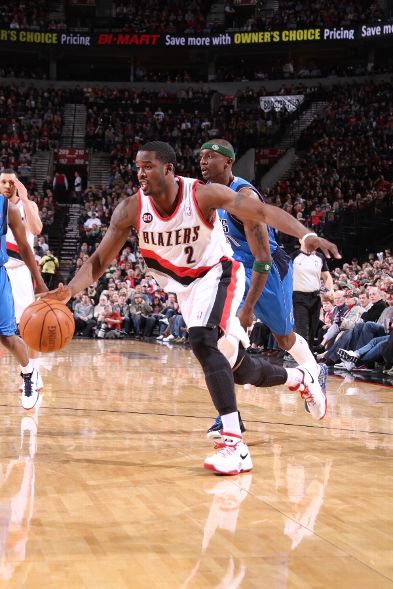 PORTLAND, OR - APRIL 3: Wesley Matthews #2 of the Portland Trail Blazers drives against Jason Terry #31 of the Dallas Mavericks on April 3, 2011 at the Rose Garden Arena in Portland, Oregon.

(On the road trip) "Long road trip, this was the third back-to-back this week. I had never done that in my career, that’s tough. Body has to adjust. You look at us out there tonight, we just didn’t have that extra burst. They got every loose ball, they got all the loose rebounds, they just outhustled us, and that tells you that you have a weary team."

(On the Nuggets next) "We’ve got Denver coming up and that’s a tough matchup. "When you get too far ahead of yourself you’re not looking at the right picture. The picture is to play a good game of full 48 minutes for the first time all season get a win. We’ve lost three in a row, so we’ve got to get back to doing what we do at both ends of the floor." 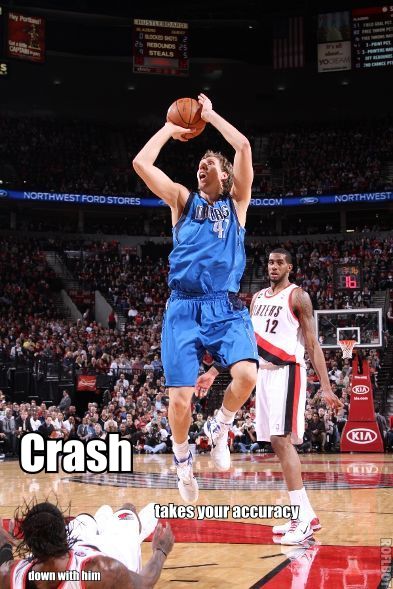 (Are thou worried about your team?) "Worried is a bit much. You go through ups and downs in a season. Obviously, it’s a little late in the season to go through a down. That’s a little disappointing. But it could be worse. It could be in the playoffs. LOL"

(On what the team needs) "We need some home cooking now. Hopefully, we’ll have Tyson back and then we got to go for it again. We got to play better, get more out of myself. Jet hasn’t been there on this trip. J-Kidd’s got to make some shots. Just all across the board.’’

(On improving quickly) "Sometimes all it takes is a good practice or a good game or a good meeting. We certainly have no time, so we'll see what happens."

(On the 1st half) "In the first half we didn’t get enough stops. We shot 50 percent, which is decent, but we gave up 60 percent shooting and never really got any stops."

(On the 2nd half) "In the second half we kept on plugging and never really got it under 10 to make a push there. Made some nice runs there, finally, actually made some stuff work offensively, but it just wasn’t enough to really get over the hump." 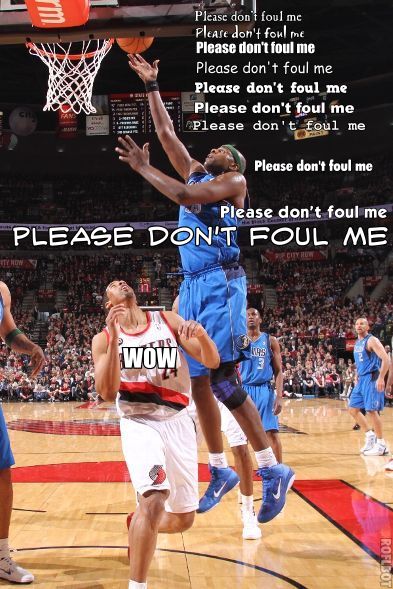 (On Portland) "There’s a good chance we’ll see them in the playoffs. They’re probably going to be pretty confident with that matchup." 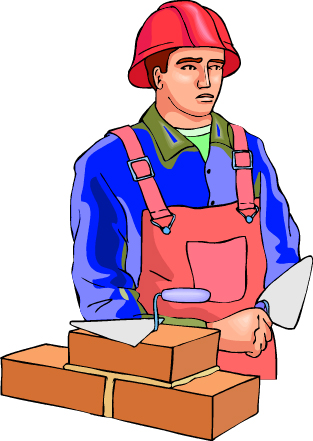 (On Portland & Playoffs) "They’re going to give anybody trouble, no matter who plays them. If we play them, we’re going to have our hands full. When they come in with bigger guards against our smaller guards, it puts some pressure on us defensively. We’ve got to be able to put pressure on them on the offensive end. That’s something that, if we do play them, we’ll have to look at and dismiss it immediately."

(On the roadtrip) "Six in 10 days is no fun. But it’s on the schedule. We’ll look back at those last three and we got some things that we have to get better at. We missed some wide-open looks. That’s been the case this whole road trip. But the big thing is we go back home. We just have to finish up, get some more wins and get ready for the playoffs.’’ 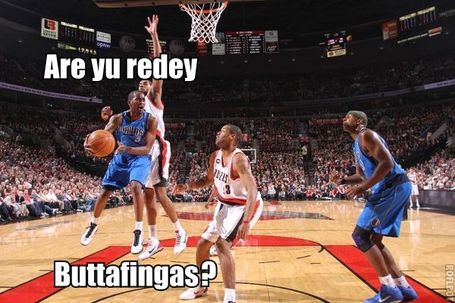 (On some scoring late) "It was the end of the game, so I will not say that it was something for me to build off of. But it’s always good to see some shots go in, ‘cause lately that wasn’t the case. But the game was over. Fo shu" 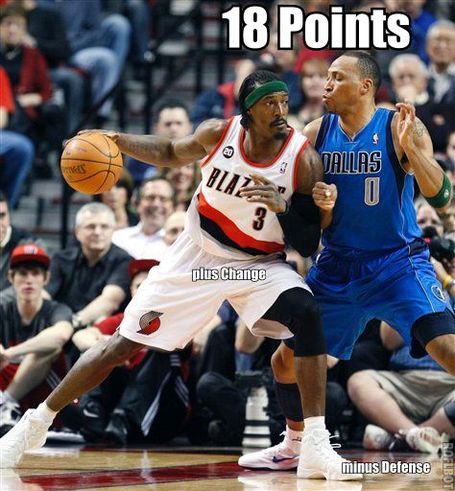 (On LMA) "I think there were a lot of things in this game that we saw and we liked. I thought Brendan did a great job on LaMarcus Aldridge tonight. I think that was the best we’ve played him this year. Even though we split with them 2-2, I think Haywood did the best job we’ve seen on Aldridge this year. You take away his easy buckets and he made him work for every shot and a lot of them were missing."

If your immediate thought wasn't 'team', you're welcome to join the gamethreads.

(On the Mavs) "They're a tough team even though they're on a back-to-back. But I thought our guys tonight did a good job of just executing offensively. I thought defensively we made them work. The execution on the offensive end of the floor was really good. Just recognizing the match-ups and going to them right away. We were pretty sharp with that. We had some match-ups in the second quarter, our guards, really our forwards, we did a good job of recognizing that quickly, getting the ball to those guys and then playing off of that, getting to our spacing."

(On Dirk) "Well, we just wanted to make him work. I thought we allowed him and Marion in that first half to catch the ball on the block. We wanted to deny that and front those guys and make them throw over the top. They were able to score when we allowed them to get the ball. It forced us into different rotations that we didn't want to be in. But for the most part you want to make them work, deny both Marion and Dirk, those are two guys that post up. The other guy is Terry. We have to do a good job of guarding Terry when we're playing Dallas." 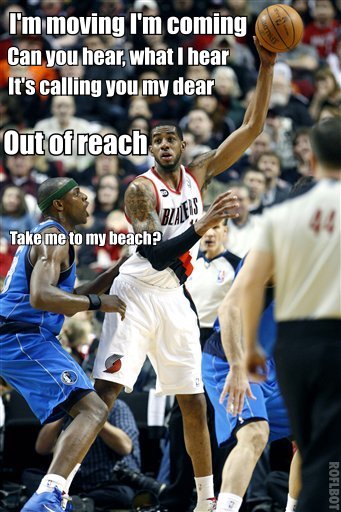 (On the Mavs) "They've been on the road for six games. We know how that feels. We know how it feels when you get down. So we just wanted to get them down early and not give them any confidence."

With 10 days left in the regular season, the Mavericks will have to regroup and re-establish their winning ways so they can get back on track before the playoffs begin.

Sunday revealed some matchup problems that will keep the Mavericks' coaching staff up at night should the two teams in fact square off in the opening round of the playoffs.

As for Dallas, the Mavericks were playing the last of a grueling six-game stretch in which they played three back-to-backs. Jason Terry said it was packed like no other span in his career. Dirk Nowitzki too said the Mavericks were in desperate need of some "home cooking." Both Terry and Novitzki pointed to fatigue as the reason Dallas fell so thoroughly at the Rose Garden on Sunday.

Dallas makes another quick run to start the second behind the heroics of Jose "Blazer killer" Barea, but the Blazers would have none of that.

Dallas can't muster enough determination to find Dirk Nowiztki in their own offense and in his absence the rest of the team can't match the Blazers' output.

Hoopdata Boxscore (Portland made 21 of 25 shots at the Rim, many of them Dunks. gg)

The only problem was that both Beaubois and his teammates missed some very makeable shots. Missed opportunities have a way of making a stat line go sour, and though Beaubois was able to throw up nine points in a hurry with the game more or less decided, I think some will still — wrongfully — see this game as further proof of some alleged unreliability. I don’t buy it, and frankly, I don’t buy a lot of the oddly negative evaluations of Beaubois’ play this season. More on that later.

Haywood bricked three of four from the line. Celebration for our third-best Center, Beaches! [nsfw]

Mahinmi shanked three of his six attempts, Dirk one of 7. 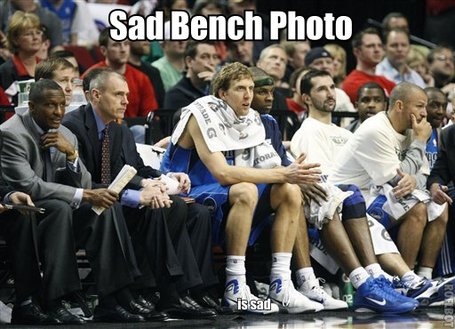 Disclaimer: If you couldn't tell by now, all italic sentences are made up thoughts, not actual quotes. Also, race for the fourth seed is difficult live again.

The Mavs (beat/lost to) [the Portland Trail Blazers]¹ tonight (thanks to/despite) totol reliance on Dirk’s Awesomeness. The (cloud in the silver lining/major culprit) once more as usual was the lack of support from his team-mates, with the exception of JJ Barea/Shawn Marion². Especially useless was Jason Terry/Deshawn Stevenson/Peja Stojakovic/Rodrigue Beaubois/Tyson Chandler's Bench production/Jason Kidd/Ian Mahinmi³ and it is (GUESS WHAT) THEY’RE ALMOST NOT ALL USELESS!