With Defense Being the Key, Have the Mavericks Improved? (Part III)

Share All sharing options for: With Defense Being the Key, Have the Mavericks Improved? (Part III)

In the second part of this piece we have learned that our Dallas Mavericks have made heavy improvements in an area of close game situations that will certainly be important for the playoffs: The 'Clutch'. Unfortunately, they held the advantage in Clutch Defensive Efficiency most of the time in recent years and weren't able to benefit from that in the playoffs. In fact it isn't even a very good rating to predict future playoff success compared to others. The team that held the advantage in the Overall Defensive Efficiency Rating has won 45 out of 60 playoff series in the last 4 years since the Mavericks have been to the Finals. Remember that the Clutch Defensive Efficiency Rating only predicted the correct team to advance in 37 out of 60 playoff series. That totally makes sense because the majority of the games are decided by and played within a wider margin.

I experimented with the numbers a bit and a +/-18 margin seems the most accurate to predict future playoff success as it picked the correct team to advance in 48 out of 60 series over the last 4 postseasons. Both the Overall and the +/-18 Rating picked the same team to advance in 45 series and both were wrong in 12 series. In the remaining three, where the two ratings picked different teams to advance, the +/-18 Rating picked the correct team every single time. So if you take away extreme margins in which the leading team relaxes a bit and the trailing team puts in additional effort to cut down the lead you will end up with a more decisive rating than the overall one in terms of future playoff success. So how do the Mavericks look in this rating this season so far? 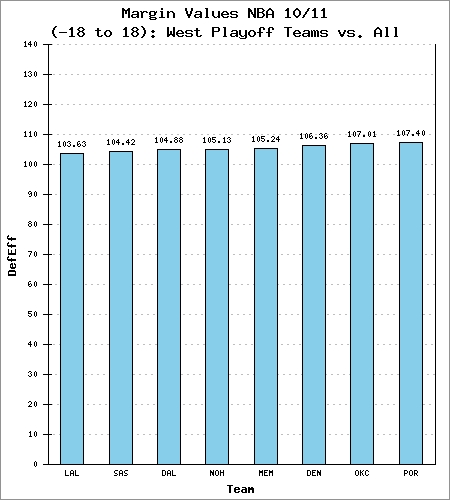 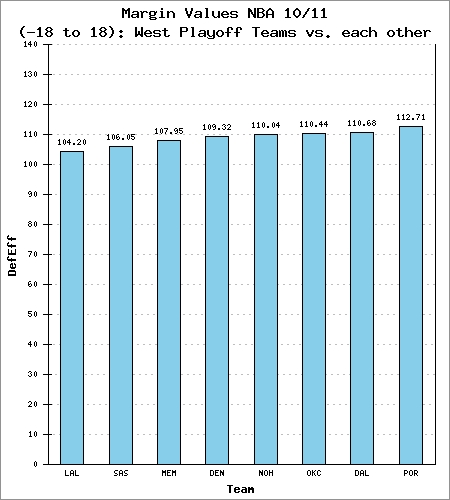 Again we have the comparison with the rating where we limited the data to games between Western Conference Playoff Teams and there is another large disparity between the Mavs performance against all teams and against their future playoff foes. As you will know they just lost to the Portland Trail Blazers to extend their current losing streak to 8 against those teams. But we also learned that this may not matter that much. The +/-18 Conference Rating picked the correct team to advance in only 42 out of 60 playoff series and therefore is worse than the +/-18 Overall Rating. As you can see, the Mavs lead teams like the New Orleans Hornets and Memphis Grizzlies in the +/-18 Rating. Teams they do trail in the Overall Rating (and the +/-18 Conference Rating). 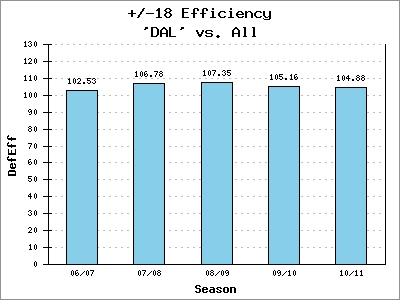 Why is that important? Because the +/-18 Overall Rating is the more decisive one in terms of future playoff success. The chart on the right shows that it is indeed the best rating the Mavericks have had over the last 4 years. Take out the major upset in 06/07 against the Golden State Warriors and the Mavericks matched up against teams with a better +/-18 Efficiency Rating in every single year and from five series they were only able to win one against a San Antonio Spurs team that was badly missing Manu Ginobili.
If the playoffs started today the Mavericks would play at least the first round against a team with a worse +/-18 Efficiency Rating. If you were looking for a change: This is one. Its an advantage they haven't had in 4 full years of postseason play.

Lets go a step further: Based on the +/-18 Overall Rating the superior team has a chance of 80.00% (48 of 60) to win the playoff series. In the 12 series it predicted wrong, the Conference Clutch Efficiency Rating stepped in and picked the correct winner in 5 more series. That said, you will hold a 88.33% (53 of 60) chance of winning a playoff series when you own the advantage in both ratings. Based on these probabilities I calculated the chance for the Mavs to proceed into the Finals for last year. It's 2.34%. They only had a 20.00% chance to come out of the first round. Then they would have matched up with either Portland or the Phoenix Suns. Because the would have held the advantage in +/-18 Defensive Efficiency over both teams, it would have translated into a 16.20% chance of coming out of the second round. But in the Conference Finals they would have matched up nearly exclusively with teams that would have owned the advantage in +/-18 Defensive Efficiency. Only exception would have been Denver. That translates into the above mentioned 2.34% chance of advancing to the NBA Finals.

Based on the +/-18 Rating they have a 88.33% chance of beating Portland in the first round this season because they own the advantage in both the +/-18 Rating and in the Conference Clutch Rating. If they met New Orleans in the second round it would be a 88.33% chance again while they would be the heavy underdog against the Los Angeles Lakers with only 11.67% (Lakers hold the advantage in both ratings). That still translates into a 18.21% chance of coming out of the second round compared to 16.20% last season. But in the Conference Finals they could meet four teams (OKC, DEN, MEM, SAS) from which only the Spurs own the advantage in +/-18 Defensive Efficiency. Overall this translates into a 6.50% chance to advance to the NBA Finals. 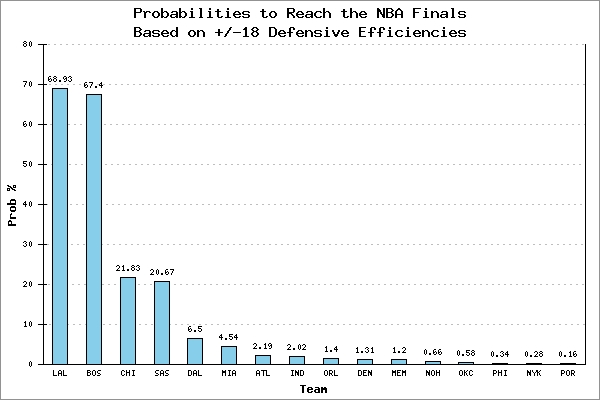 So we took away extreme margins and ended up with a more precise rating which is also favorable for our Mavs because they tend to relax a little bit too much when leading big. Then we calculated the probabilities to advance to the NBA Finals and the Mavs improved their chance from 2.34% to 6.50% compared to last season. So if anybody complains about the defense in the future, go tell him we nearly tripled our chance of advancing to the NBA Finals based on Defensive Efficiency. Good! Good?

As always there is a downside though. First of all I assume that the +/-18 Rating is indeed a better rating to predict future playoff success. With a sample size of only 60 playoff games this is risky to say the least. Then there are still a few games to play which could very well shuffle the +/-18 Rating. The ratings of SAS, DAL, NOH and MEM are so close that nothing is set in stone so far. If the Mavs are able to take the lead over San Antonio, they'll raise their probability to 16.02%. If they fall behind MEM (5.90%), NOH (3.98%) or both (3.62%) the probabilities will drop rather fast. And of course it depends on the first round matchup which also isn't set just yet.
And last but not least the Mavs may have tripled their chances compared to last season but you should rate for yourself whether 6.50% is a promising number or not.