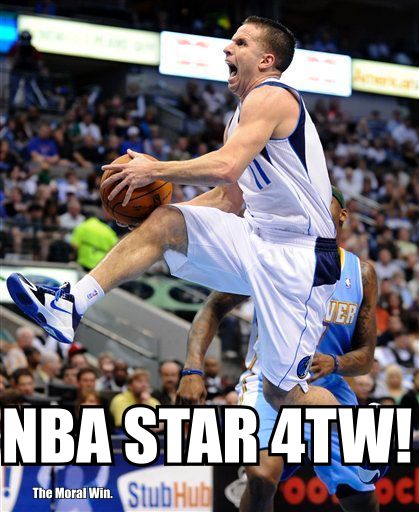 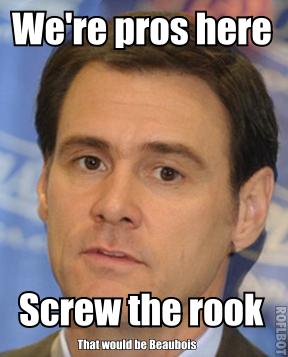 (On the game late) "I loved the way we battled to 94-all, but I didn’t like the way we gave up 10 straight. But it was turnovers and miscues. I’m upset with what happened at 94-all. You can’t have a situation where you give up a couple of shots, and then turn it over the way we did, give up another basket and then get a technical foul, regardless of the situation. We’re pros here, we’re not rookies running around out there. We can’t be doing that kind of stuff. After the fact, I think our guys realized it, but in the heat of the moment we’ve got to be better."

(Will Rest help Kidd play better?) "We hope so. We hope so. Look, we believe we're going to have enough games together to have a rhythm. But it's kind of like J.J. Barea. He's dating Miss Universe and he's been playing real well since he's been dating her. Well, should we go out and get Miss Universes for all the guys? I don't know. Sometimes you can't always work things like that. In all seriousness, I just don't know if it's ever going to be perfect. Last year we went into the playoffs on a five-game roll and all seemed well, and we struggled. The priority in my mind is to make sure the guys that need rest get the rest; the guys that have any health issues get those resolved and then we've got to focus in on who our first-round opponent is."

(On 13 Points) "I love the points, but I love the energy more. You talk about a guy staying ready and taking advantage of an opportunity, I thought 13 Points played terrific tonight. We were down quite a bit when he came into the game, but he energized us, helped get things going and he made sound plays for the most part. I was really impressed with his game."

(On Terry's Ts) "He knows that this is going to be everyone’s game plan, to try to get him out of his game, get him to react emotionally. This is a good lesson, because with 46 and change seconds left, it’s a two-possession game and he’s got to keep his head. He knows that. And we did talk about it."

(On the Killer) "Turnovers killed us, obviously. 17 turnovers for 25 points is a game-losing number."

(On defensive breakdowns) "At half time, we had an honest talk about things.Then i went into the lockerroom and voiced my opinion about pancakes."

(On transition defense leading to Marion's benching for not running back) "He trotted back, and it was after a missed shot. I don’t give a crap about a missed shot, but when anybody on our team is not running back, that’s a problem. That’s a problem. I can’t tolerate it as a coach, and those guys can’t tolerate it as a group that’s trying to get somewhere." /gives Dirk a stinky look, too

(On French Jesus) "This is good for Roddy. All things considered, he hung in there. No Pun intended"

(On not beating a western Playoffteam in like forever) "Right now with our team, it’s not about measuring sticks or anything like that. It’s about getting our health, getting our physical and mental disposition where it needs to be and then moving forward every day feeling like we made progress." 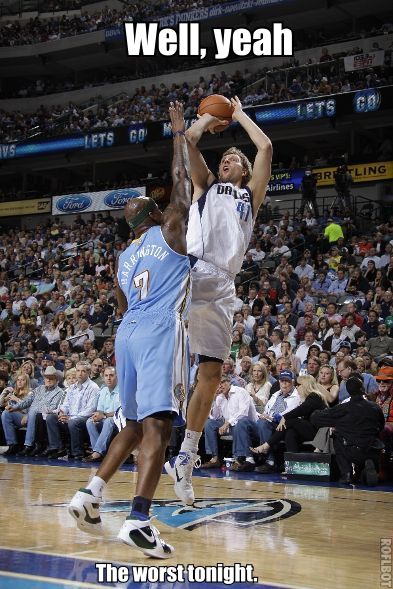 (On Denver) "You've got to give them credit, though. Every time we made a run they had an answer for us."

(On what changed as the Mavs lost 4 straight) "We haven't really been shooting the ball well, that's been one of our strengths all season long."

(On streaking) "We’d obviously like to end the regular season on a positive note, so hopefully we can get Tyson back soon and just win some games. It's possible we can slip to fourth in the West. We’ve just gotta settle down, hopefully get one Friday and then just go from there."

(So you want to be the 4th seed?) "I don't think it does any good to watch the standings now. We've got to start playing better and feel good about ourselves going into the playoffs." 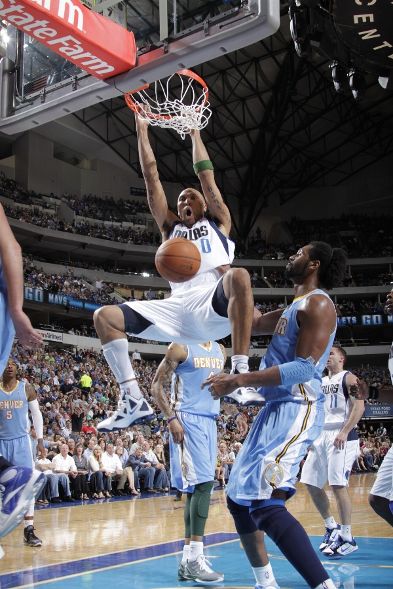 (On playing without Kidd & Chandler) "It's tough, but we're so deep. We have enough weapons out there, we should have won this game."

(On being benched for not running back) "I mean, we need more than that, but that’s OK. I’ll take it, but you’ve got to make an example out of everybody. I’ll lead by example. That’s fine. It is what it is. I didn’t do it on purpose. I got a little discombobulated. It’s OK. Move on." 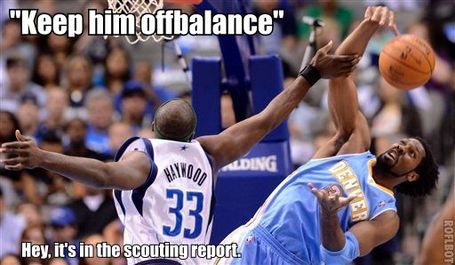 (Say something positive about the team, anything) "The positives were that we played a good game, we didn’t have two starters, we fought back and made it a game. So, there were some positives, but at the end of the day it’s all about the wins and the losses."

(On his Love-ly rebounding) "I would've been more impressed if we got the win."

(On 13 Points) "I love what 13 Points brought to the game today, especially for a guy that hasn’t played in a certain amount of games. He really hasn’t gotten any significant minutes, so to come out here and play like he did tonight was phenomenal." 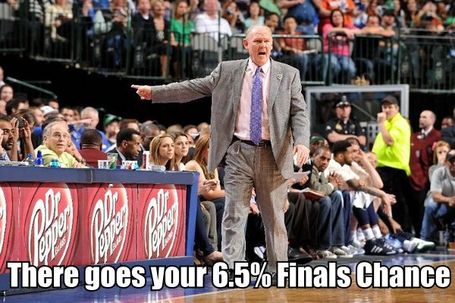 (On JR Smith) "I thought J.R. had a great game, especially in the second half. He was making some 3s and every time we needed a field goal, he got one for us. And it was good to see him get to the rim a couple of times and not just totally be settling on jumpers."

(On Playoff opponents) "I just think it's gonna be Oklahoma City." 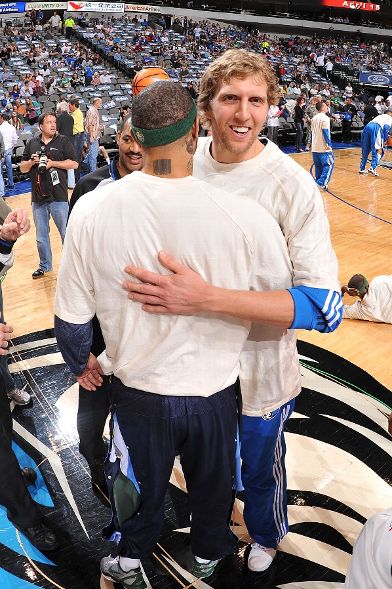 Just two good buddies greeting each other. Nothing to see here. /NBA

(On playing good team ball) "Everybody's starting to come together after the moves we made. No better time than now to start playing your best basketball. You don't want to go into the playoffs limping."

(On the game) "We stayed the course and made them take tough shots, limited them to one shot, and executed on the offensive end. We just wanted to bounce back from a rough loss last night. You don't want to lose two straight. We wanted to make a good show and we played well from the start."

The positive results for Rodridgue Beaubouis at the tail-end of the Portland game seemed to give him a sense of confidence as he was aggressive early and often to start the game as the point guard. Unfortunately, the aggression did not lead to positive results as he struggled handling the point guard responsibilities. The guard is still young and this should be a good learning experience for him going forward to the olympics.

One day after being benched for the entire fourth quarter in a close game, JR Smith was given a second chance by head coach George Karl and sent a message through his effort on the court. That message: If you want to win close games, you better let me play.

As for the game itself, the Nuggets controlled pretty much from the start of the first quarter on. They dictated pace, energy, style of play and could basically get any shot they wanted through the first three and a half quarters.

Is it possible that the Mavericks would prefer to draw Denver in Round 1?

It is possible, and here's why: the Mavericks are deathly afraid of playing the Lakers in Round 2, the Mavericks' likely second round opponent should they hold onto the three-seed.

The bottom line is that Oklahoma City does have a shot to catch Dallas for #3. Denver can help that along by losing Friday Night in Oklahoma City. Any team paying attention lately would rather play Dallas than OKC in the first round.

J.J. Barea had a hell of a game off the dribble, and though Beaubois was technically starting in place of Jason Kidd, it was Barea who ended up with the ball in his hands for most of the game. That strategy seemed to backfire when Barea committed a costly turnover with just two minutes remaining and the Mavs trailing by four, but 12 points on 12 shots from Barea to go along with 10 assists is a nice return. The aforementioned four turnovers hurt, but Barea was creating off the bounce, a skill that grants him a unique value in the context of this team.

If this were a singular hiccup on an otherwise strong defensive résumé, perhaps the Mavs' performance could be chalked up to a bad night or Chandler's absence. However, this type of defensive showing has grown to be more or less routine for the Mavs over the past few months. In the playoffs, Dallas can't afford to play sound defensive basketball for merely half a game, as it did Wednesday.

Haywood bricked five of six from the line. Celebration for our third-best Center, Beaches! [nsfw]

Mahinmi shanked one of two attempts, Marion one of 2. 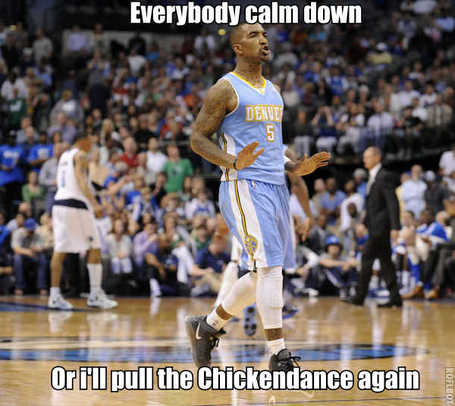 Disclaimer: If you couldn't tell by now, all italic sentences are made up thoughts, not actual quotes. Also, race for the fourth seed is almost over. We got it.

The Mavs (beat/lost to) [the Denver Nuggets]¹ tonight (thanks to/despite) totol reliance on Dirk’s Awesomeness, which couldn't be bothered tonight. The (cloud in the silver lining/major culprit) once more as usual was the lack of support from his team-mates, with the exception of JJ Barea/Shawn Marion². Especially useless was Jason Terry/Deshawn Stevenson/Peja Stojakovic/Rodrigue Beaubois/Tyson Chandler's Bench production/Jason Kidd's influence/Ian Mahinmi³ and it is (GUESS WHAT) THEY’RE ALMOST NOT ALL USELESS!

² Only one of them, mind you. Unless the double-double both.