Playoff Rotations: 3-Guard Lineup an Area Where Roddy Could Shine?

Share All sharing options for: Playoff Rotations: 3-Guard Lineup an Area Where Roddy Could Shine? 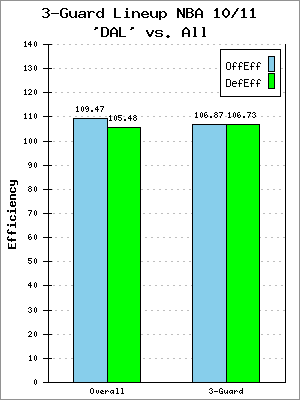 The 3-Guard Lineup is a weapon Rick Carlisle constantly used this season whenever nothing else was working or the matchups seemed favorable. Digging into the numbers I was surprised to realize that the 3-Guard Lineup was used in about 20% of the possessions this season. You have to be careful though because this kind of lineup was used out of necessity for a certain stretch in the season with DeShawn Stevenson playing at the Small Forward spot.

While it certainly gave the Dallas Mavericks an edge in some games, the efficiencies advise to continue to use it wisely going forward as it was not as efficient as the more traditional lineups. On both ends of the floor the team statistically has suffered while using the 3-Guard Lineup. If you take away games in which Carlisle had to play Stevenson as part of the Forward rotation you'll end up with even worse ratings (Off: 102.99 Def: 105.73). So why is Carlisle temped to use the 3-Guard Lineup that frequently? Because some combinations do work. We'll get back to that later on but will take care of some basic stuff first.

Rebounding for example. While you would expect that rebounding could be an issue with an undersized lineup on the court, the Mavs haven't suffered in this particularly area. In fact, the defensive rebounding percentage only takes a small dip from 74.85% to 74.54% while the offensive rebounding percentage increases. From 23.74% to 24.50%. Three point shooting is another story. You would expect that the team should benefit form a small lineup in that area, but they don't. While taking more shots from beyond the arc in a 3-Guard Lineup (0.30 per possession compared to 0.24) the 3FG% takes a huge dip. From 36.65% to 30.63%. They are also not averaging more assists or steals or free throw attempts, at least not at a mentionable rate.
Defensively they take away a bit of the 3-point shooting of the opponent but otherwise there is really nothing that is eye-catching. 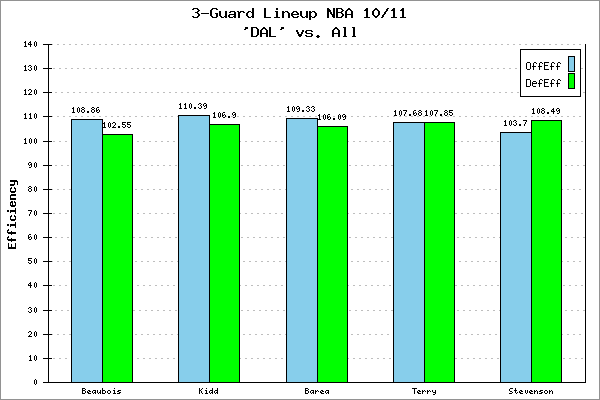 Let's move on to individual player statistics. As you can see on the right, Rodrigue Beaubois is the most efficient player within the 3-Guard Lineup. With him on the floor the team even posts better efficiencies than usual (in terms of Efficiency Differential). And he is the only player to do so out of the five current guards. The team grabs rebounds at an amazing rate of 78.50% with him on the floor and 70.53% (Team: 63.79%) of all field goals are assisted. Opponents only shoot 44.15% from the floor and 29.17% from three while their turnovers increase. You should note that his impacts are mainly limited to the defensive end of the floor and that fits the observations lately. Roddy still looks uncomfortable and anxious offensively, but is really working hard on the defensive end. He can be a good rebounder when needed and has emerged to one of the better defenders this team has. So while his offensive shortcomings are clearly unfolded in traditional lineups it seems that he is able to somewhat hide that behind the two other guards and instead provide upside in an area the 3-Guard Lineup normally lacks: Defense. Add that the lineup forces more turnovers and that Roddy can surely finish in transition and you'll get the idea why he is arguably the best option within a 3-Guard Lineup. 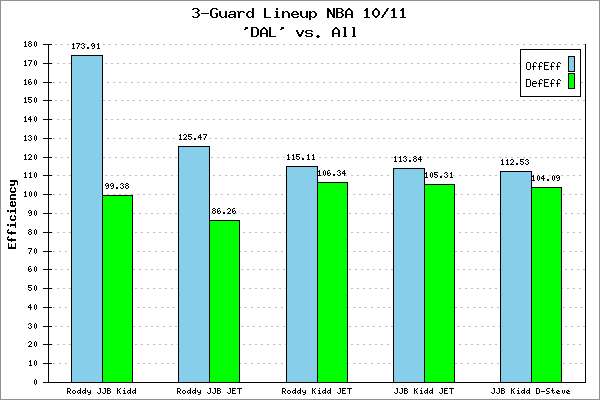 On the left you can see all those lineups that have a better Efficiency Differential than the season average. The first two lineups are some kind of hypothetical though, because the Mavs have used it only for a combined 40 possessions. This is one of the areas where it really hurts that our kid was injured for most of the season. You would have liked to see more of these combinations to have a better sample size. But the stats of the third best lineup are not less impressive. With Jason Kidd, Jason Terry and Roddy on the floor the team shoots 49.38% from the floor with an acceptable 35.71% from three. They grab 83.78% of all defensive rebounds, 28.21% of the offensive boards and 80.00% of the field goals are assisted. The more frequently used lineup with Jose Barea can only keep up because it attempts way more free throws and the defensive numbers are slightly better. The advantage is slim but you can make a clear case for Roddy to be part of any 3-Guard Lineup Carlisle throws at the opponent in the playoffs. 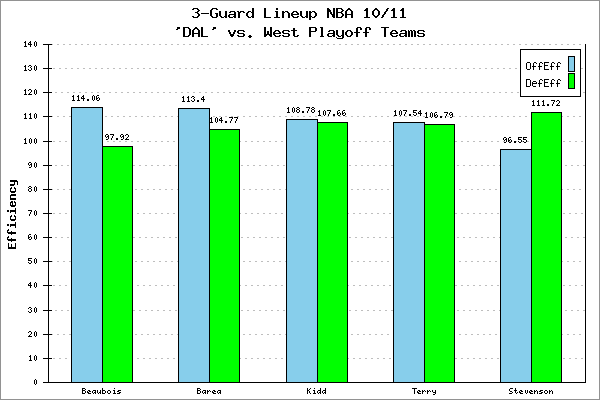 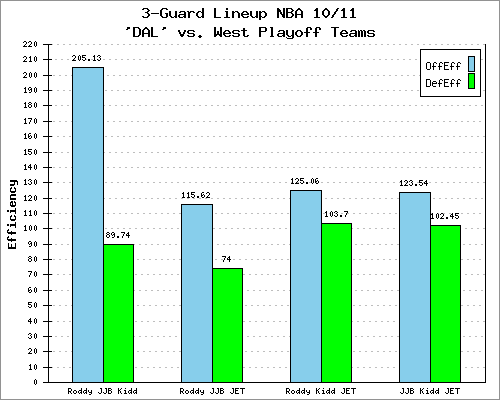 Finally these are the numbers against future playoff foes. The picture doesn't change. While the 3-Guard Lineup generally seems ineffective, there are indeed selected lineups that do have an impact. It stands out that the above mentioned lineups of Roddy or Barea with Terry and Kidd are even more effective against future playoff foes. That does not mean the 3-Guard Lineup is generally better but rather that the coach knows when it makes sense to use them.

So while you might be disappointed with the performance of Roddy in recent weeks, or lets say he doesn't meet the expectations, the 3-Guard Lineup is an area where he can really help the team and should be used without hesitation.