Mavericks Still Live and Die By the Three

Share All sharing options for: Mavericks Still Live and Die By the Three 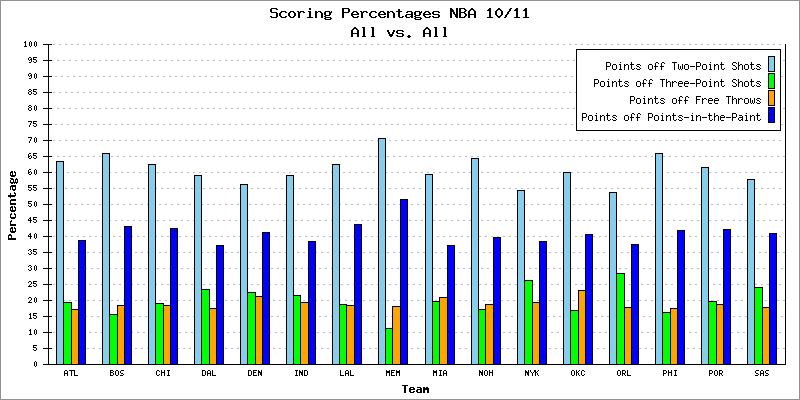 The percentages are shown on a per 100 possession basis. Dallas ranks 4th among Playoff Teams in Points off Three-Point Shots and last in Points off Points-in-the-Paint. This confirms the dependence.

These are the sortable percentages and I've added Points-in-the-Paint per Points off Three-Pointers (poitp/po3fg) and Points off Two-Pointers per Points off Three-Pointers (po2fg/po3fg). If you order it by the last column you'll notice that Dallas is 12th in that category. They score 2.5 points off Two-Pointers per point off Three-Pointers. Furthermore 6 of 8 teams in the bottom half are already eliminated from the playoffs. And all have something in common. For the most part they couldn't hold onto their 3FG% from the regular season: ORL -10.41%, NYK -2.00%, SAS -10.30%, DEN -1.87%, IND +2.27%, POR -4.46%, MIA -8.11%, DAL +1.54%.
That's not unusual for the playoffs. Three pointers are hard to come by with the defenses tightening up things but the teams who were more reliant on their shots from beyond the arc were eliminated at a notable rate. And with the Magic and the Spurs also higher seeds. Dallas and the Miami Heat prevailed for now.

These are the values from the playoffs. Dallas ranks 15th in Points off Two-Pointers per Points of Three-Pointers. So that didn't change. Interesting thing is that the Bulls, Thunder, and the Celtics got a lot more Points off Three-Pointers compared to the regular season while Dallas nearly matched their regular season average. So you could say that they are still dependent on that but didn't change their style as much as these mentioned teams. That's a plus. And as long as they are hitting those they have all rights to rely on their long distance shots. I am still a bit concerned because there will be a time when the shots aren't falling and then it will be interesting if the team is able to adjust. In the last two games of the previous series though, Dallas was only 10-32 from beyond the arc. Made, Attempted 3FG and 3FG% were clearly under their season average and they still were able to win quite convincingly. I'll take that as a good sign.