Share All sharing options for: NBA Playoffs 2011: Rest Or Rust?

Ask Dirk Nowitzki in recent years and you would have gotten the same answer over and over again: He rather stays on the court than getting some extra rest. Just like this year when the Mavericks decided to give Jason Kidd some rest down the stretch but rolled on with Dirk. Gregg Popovich of the San Antonio Spurs started last year to sit out Tim Duncan in back-to-back games. And he also gave Manu Ginobili and Tony Parker two games off at the end of the season as soon as the first seed in the West was cemented. They were eliminated in the first round, the Mavs are on the move ever since.
But now Dirk has no choice. He has to sit. They finished the Los Angeles Lakers way too early. But does rest hurt or help a team in the next round of the playoffs? We'll take a look at historic stats now starting with the '84 season. Since then the playoffs are played with 16 teams and through 4 rounds. This kind of extends the conversation in this excellent piece by tcat75. 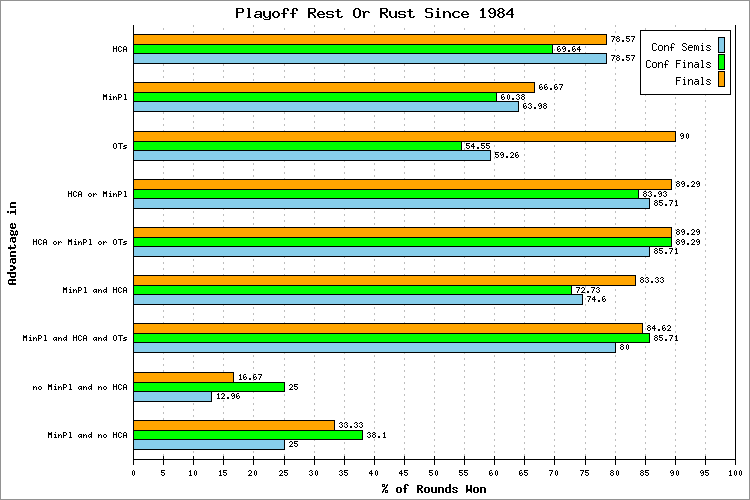 The "and"-combinations give a quick view over the probabilities when two or more advantages actually applied for one team. In series in the Conference Finals the team that held the advantage in home-court, minutes played and OTs played has won 12 of 14 series and 51 of 77 games in the series. Statistically 233 fewer played minutes (one game = 240 minutes or 5 players * 48 minutes) translated into 1 more win in the series. If the Thunder can close out the series tonight without further OTs, they will have played 340 more minutes than the Mavericks (1 game plus 4 OTs).
Don't get too confused that these values are actually lower than the values in the "HCA or MinPl or OTs" row, because the series that have been won without home-court advantage are included there as well. But these are the more precise values for the scenario the Mavericks will face in the Conference Final.

This year, the Heat have played 25 minutes more this offseason so far. One Overtime. So for the Mavericks it will not only be a battle for wins but also a battle for rest. Don't worry Dirk. The numbers say it will help you!