NBA Finals: The Mavericks Have A Chance To Overcome the Past This Year, But Not In the Way You Might Think

Share All sharing options for: NBA Finals: The Mavericks Have A Chance To Overcome the Past This Year, But Not In the Way You Might Think

After the Western Conference Championship was clinched, I went out with some friends of mine the day after and it happened that we were also talking NBA, which is a rare occurance because we use to talk soccer a lot more than Basketball.
The thing is: Normally the German media does not cover the NBA at all. But that changes once Dirk Nowitzki plays for the title. Just like this year. Then out of the sudden you can read articles, watch extended coverage in the news and a German Pay-TV channel picks up the rights to show the NBA Finals. And because of that a lot more people are interested and at least kind of informed. So were my friends. One actually even had read some "Wikipedia" articles about the Mavs recent playoff struggles and out of nowhere asked a brilliant question (as it turned out later):

"Everywhere I read those things about the 11 consecutive 50+ seasons and early playoff exits but apparently I don't get the point. Every year multiple teams (in the Western Conference) finish with 50 or more wins. So some teams with this record inevitably have to be eliminated in the first round. So what's wrong with it? Why is that such a big deal? Can you tell me what the probability for such a team is to get eliminated in the first or second round for 4 consecutive years? Shouldn't be shockingly high."

I couldn't answer the question right off the bat, but it aroused interest immediately. Here we go:

Although my friend didn't know what he just had brought up, the question was legit: What does this stat of consecutive 50+ winning seasons mean anyway if the West is so competitive that you will need 50 wins in some years to even make the playoffs? And furthermore: Is it, statistically, completely improbable to miss the third round of the playoffs on 4 consecutive seasons with a record of 50-32 or better?

First of all, let's compare the three teams that managed to accomplish 11 or more consecutive seasons with at least 50 wins: The Dallas Mavericks (0 titles, 2 Final appearances during that span), San Antonio Spurs (4 titles on 4 appearances) and the Los Angeles Lakers (5 titles on 8 appearances).

The table shows you that the Lakers by far averaged the most wins in their 50+ seasons. The Spurs trail them by 2 wins on average and the Mavs by 3. I calculated the correlation between regular season wins and playoff success over the last 20 years (excluded the lockout season) and it is a strong one: 0.61 for the Western Conference (a "perfect" positive correlation, meaning the team with the most regular season wins always has the most playoff success, is 1.00) and 0.75 in the East. So regular season wins is a major factor in the playoffs. Start with the seeding and the resultant home-court advantage through multiple rounds in example. Therefore it is not surprising that both the Spurs and especially the Lakers had more success in those seasons compared to the Mavs. That leads us to the second row. Lakers lead here too. So far so good. But you will notice that the Spurs own a seeding advantage of 1.5 over the Mavericks while averaging less than a win more over the seasons. That seems odd. A simple explanation could be that the Mavericks had a few stellar seasons (60+ wins) with high seedings but most of the time just got over the 50+ hump and their seeding was pretty low while the Spurs were the more consistent team in averaging 57-58 wins most of the time. So I split up the seasons and calculated the average seeding for 50-54, 55-59 and 60+ seasons: 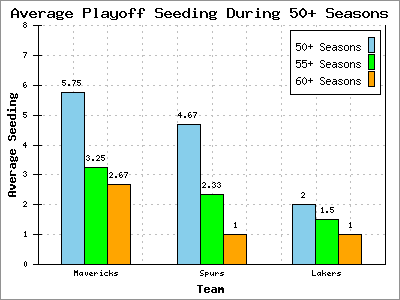 We will put the Lakers out of the conversation right now for a simple reason: They dominated the Western Conference in the 80s. No matter how many games they had won ... they were grabbing the first seed nearly every single time: In 10 of the 12 seasons. That's because the West wasn't as competitive back then as it is today. In four consecutive seasons they were ahead by at least 8 wins at the end of the season. Also 54 wins were enough in 83/84 to secure the first seed in the West. That would be unthinkable today.
What about the Spurs? The seeding discrepancy continues. Both the Spurs and the Mavericks had three 60+ winning seasons, but the Spurs ended up being the first seed every time while the Mavericks only achieved that once: In 06/07 where they had won 67 games. What happened? In 02/03 the Mavericks owned a record of 60-22, just like the Spurs. But because they had lost the tiebreaker they ended up second the Midwest Division (the NBA had only two Divisions in each Conference at that point). The Sacramento Kings owned best record in the Pacific Division (59-23), but because each Division winner qualified for a Top2 seed regardless of record back then, the Mavericks were only third despite having the same record as the Spurs.
In 05/06 the situation was the same: Mavericks owned a record of 60-22 but couldn't win their Division trailing the Spurs. Because the league had been rearranged into three Divisions, the Mavericks were only the fourth seed behind all three Division winners despite having the second best record (by far!) in the West. The 3rd seeded Denver Nuggets had only the 7th best record in the West.
In 06/07 the league changed the seeding system to what it is today. Winning the Division only is a factor when a tiebreaker is needed. Ironically the San Antonio Spurs finished second behind the Mavericks in the Southwest Division and were the third seed with the third best record in the West. The Utah Jazz won their Division but the new rules pushed them back to the 4th seed. The San Antonio Spurs beat the very same Utah Jazz in the Conference Finals with home-court advantage and moved on to win the title.
You can basically go through the seasons and will experience that over and over again. Whenever the Mavericks had a stronger season (57,58,60 wins) they finished behind the Spurs and because of the rules back then they were also trailing all Division winners in the seeding. Once the rules had been changed and the Spurs finally didn't win that many games, it wasn't that important any longer.

I know it's never a good idea to blame luck. But I will do that right now. In another decade or just without another great team at eye level in the same Division the wins the Mavericks produced during that 50+ span would certainly have transferred into more 1st and 2nd seeds. And with that, into more success as well.

Now onto the 50+ stat in general. It's really a nice one because three great teams of their time were able to accomplish that. But honestly: It's useless. It's like the statistic of games won within 5 points or less that ESPN shows every once in a while. Cute, but meaningless. In the last 20 years (and that even include many years before the millenium break in which the Western Conference wasn't as competitive as it is today) 45 teams finished within 50-54 wins. Zero went to the NBA Finals and 39 (86.67%) were eliminated in the first or second round. The Mavs posted a 50 and a 51 win season in their 4 Post-Miami-Collapse years. 50+ season? Yes. Good precondition to make a deep run? No. The 50+ stat should be the 55+ stat. Teams that reached the Western Conference Final had averaged 56.95 wins during the regular season. Teams that represented the West in the NBA Finals had averaged 59.45. So where is the connection between winning 50+ seasons and overall playoff success? There simply is none. At least not when you're within 50-54 wins. As said, it should be 55+ wins. From 65 teams that had won at least 55 games during the regular season, 19 (29.23%) represented the West in the Finals and 33 (50.77%) reached the Conference Finals. Only 12 (18.64%) were eliminated in the first round. Yes, the Mavericks were among these 12 two times, but we'll come back to that point later.

It's a different story in the Eastern Conference though. From 28 teams that had won 50-54 games during the regular season, 6 (21.43%) represented the East in the NBA Finals and 12 (42.86%) reached the Conference Finals. Only 6 (21.43%) were eliminated in the first round. Here's a comparison between the East and the West: 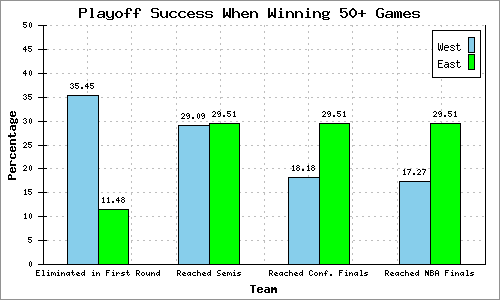 Okay. So how improbable was it for the Mavericks to lose in the first round three times and in the second round one time in 4 years while winning 50+ games in each season? There are different ways to look at it. First you can go with teams that had won at least 50 games during the regular season in the Western Conference. 35.45% of these teams ended up losing in the first round and 64.55% were eliminated by the second round. For the 4-year span the probability is:

Not very high, but also not really improbable. It happens once every 34 years.
This calculation is not very accurate though. As I've pointed out above the Mavericks just got over the 50+ hump in 2 of the 4 seasons and so should have had a very good chance to get eliminated in the first round in these seasons. So we'll use the categories (50-54, 55-59, 60-64 etc.) now. The Mavericks had two 50-54 seasons (50 and 51 wins), one 55-59 season (55 wins) and one 65-69 season (67 wins). The problem is: In 20 years of Western Conference Basketball only 4 teams ever had a 65-69 season. And while the other three went on to the NBA Finals, the Mavs were the only team to stumble in the first round. That would give 65-69 teams a probability of 25% to lose the first round which is, well, not very reliable. So I'll use another category here. Teams that had won at least 60 games during the regular season. 20 teams had won 60+ games during the regular season over the last 20 years and three of them were eliminated in the first round (15.00%). The probability of that 4-year span to happen with this calculation is:

That's once every 15 years. For all of you that still think the number is too small: That's far, far away from improbable. It happens every once in a while. I haven't checked it but I firmly doubt that any other team experienced such a bad playoff run in the last 15 years while winning so many games in the regular season. So it's sad for the fans and the team that it happened to them, but it had to happen to somebody.

To close this case: The San Antonio Spurs, based on this data of the last 20 years, were projected to appear in the NBA Finals 3.68 times (been there 4 times) during their 50+ span. The Mavericks 2.50 times (2 appearances). So yeah, the Spurs slightly overperformed and the Mavs slightly underperformed, but as we've pointed out here they heavily got punished by the seeding system and it is not, by any means, as worse as it's sometimes sold in the media.

They were not soft and they didn't choke. They just were bullied by the probabilities. Yes, they have to overcome something this year. But it's not their past filled with failures. It's their bad luck playing head-to-head with one of the greatest teams of their time, an unfavorable seeding procedure and a bad streak that can happen to any team every once in a while.