Share All sharing options for: Possible Implications Of the Ron Artest Suspension 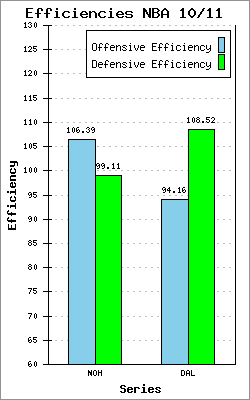 Been browsing a lot and went deeper than normally into "Lakers" territory (Blogs, Message Boards etc.) after the win in Game 2 against the Los Angeles Lakers on Wednesday. What surprised me was the fact that some fans are seeing the suspension of Artest as a relief for their team because he hasn't played good anyway. More over that, the Lakers are playing a better ball in the playoffs in terms of Efficiency Differential when Artest is on the bench (+7.28) vs. when he is on the court (+2.78). Their offense suffers a bit but the Defensive Efficiency shrinks from 108.39 to 99.11. So the Lakers are playing better defense with Ron Artest being on the bench?

Most of the sample size is from the series against the New Orleans Hornets. In this series L.A. indeed played significantly better with Artest on the bench. That's because their bench played a lot better against the depth of a banged-up Hornets team. In this series though the bench is a big culprit of the 0-2 hole that the Lakers are in. They have gotten one decent game from Odom so far. That's it. The 3B-Combo off the bench (Barnes, Blake and Brown) failed to produce at all. Barnes owns a PER of 0.54 in the two games against Dallas, Blake -6.84 and all four bench players that played for the Lakers actually couldn't hold on to their PERs of the regular season. By wide margins.

So while overall in the playoffs the Lakers do play better with Artest on the bench, most of the data is a leftover from the Hornets-series. In this series Artest has helped the Lakers a lot. The chart on the right shows the Lakers efficiencies while Artest was on the bench. 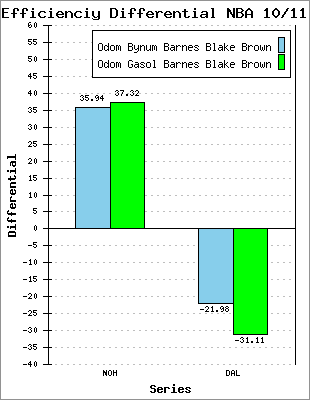 You can further confirm that by simply looking at the most frequently used bench lineups for the Lakers. Both Lineups worked pretty well against the Hornets, but were overpowered by a much more talented Dallas bench. Although Artest's numbers also got worse during this series, the pathetic play of the Lakers bench is what really makes the difference right now. That's why they are so much better with him.

Let's talk implications. Artest hasn't missed a single game this season. The probable starting lineup for the Lakers tonight has played a total of approx. 11.70 possession this season and appeared in 4 games. Yes, that's regular season and postseason combined. Phil Jackson could play a very big lineup with Odom, Gasol and Bynum, but word right now is he wants to keep the big man rotation intact. Barnes has played within the "closing" lineup with Derek Fisher, Kobe Bryant, Lamar Odom and Pau Gasol for 184.80 possessions through 29 games. That went fairly unsuccessful for the Lakers though. They post an Efficiency Differential of -22.73 with that lineup, -24.66 in 4th Quarters. From all the lineups the Lakers have used this season for at least 50 possessions, this is by far the worst.

One thing Artest has done exceptionally well against the Mavericks is limit the production from the Small Forward spot. He has guarded both Shawn Marion and Peja Stojakovic very well during the series. With Artest on the floor, Marion shoots 53%, without him 75%. Same with Peja: 33% compared to 43% (taken from StatsCube). I think Peja might benefit the most. Artest recently blocked two 3-point attempts and is indeed a very good Spot-Up defender. According to SynergySports he gives up 0.78 Points per Possession on those plays and opponents shoot 28.4% on their long range attempts. Matt Barnes meanwhile gives up 0.96 PPP and allows opponents to hit 38.6% of their threes. That's a huge difference. The defensive reputation of Barnes is based upon the fact that he can defend Isolations and P&Rs very well. Two plays the Mavericks don't run for their Small Forwards. He is mediocre in defending Post-Ups and Spot-Ups. Plays the Mavericks do run for their Small Forwards. So in my eyes Artest, especially in this series, is a huge upgrade over Matt Barnes.

The Mavericks have feared playoff history so far. Now they can feed off it. 88.5% of the teams without home-court advantage have won their series going up 2-0 and no team has ever come back from a 0-3 deficit. The Lakers are fighting for their playoff-life tonight and Lakers fans be assured: Not having Ron Artest won't help.