Share All sharing options for: NBA Playoffs 2011: Mavericks Lead Virtually All Major Categories In the Clutch

At least in two of the three games in the current series against the Los Angeles Lakers the Dallas Mavericks have won the game in the Clutch. As pointed out here earlier this season they were the best team in terms of Efficiency Differential in the Clutch in the regular season. And while it has been proved that the Margin of Victory provides more accuracy in predicting future playoff success, it's unquestionable that their Clutch-Play gave them the 3-0 lead over the Lakers. Here are the Clutch-Efficiencies for both the regular season and the playoffs for all Playoff-Teams: 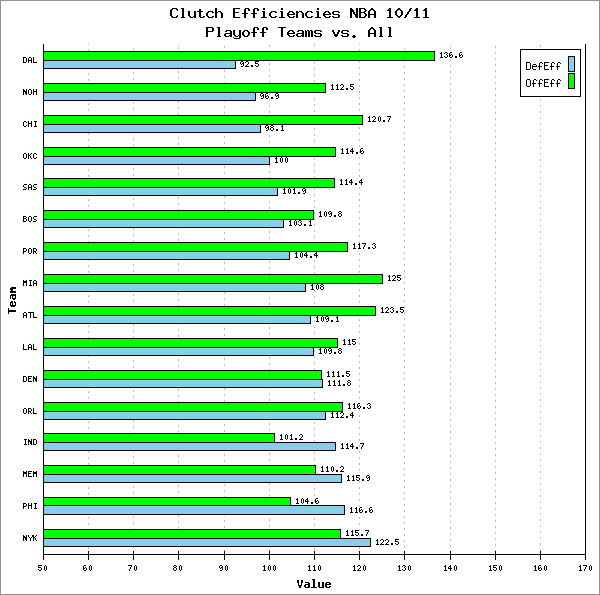 Dallas leads all Playoff Teams (and the entire league) in Defensive Efficiency, Offensive Efficiency and therefore also in Efficiency Differential with +44.12. That means over 100 Clutch Possessions the Mavs would outscore opponents by +44. That's amazing. More over that, the next best team in the list are the Chicago Bulls with an Efficiency Differential of +22.56. So the Mavericks are twice as good in the Clutch as any other Playoff Team. How about that?

Of course every game has a limited amount of Clutch Possessions and in the worst case the numbers could be misleading. Let's say the opponent has just cut the lead to 5 and the Mavericks have the ball and score. That would count as a Clutch Possession. Now assume that the opponent hits a three, which would not count as a Clutch Possession because at that point the lead would be 6, 7 or 8. I guess you know what I mean. If the lead varied from 4 to 6 because both teams score two points on every possession, one team would leave the game with a huge Efficiency Differential in the Clutch (+200.00).
That's not the case though. The Mavericks have had approx. 330.90 Clutch Possessions this season and outscored the opponents 452-306. Mavs attempted 262 field goals, opponents 280. So really no evidence that the Mavericks have capitalized on fortunate game situations.

Sortable Clutch-Stats for every team this season:

The Mavericks lead the league in every shooting category and in Free Throws Made per Field Goal Attempts. In comparison: They overall rank 17th in FT/FGA. Rebounding stats are also decent and really the only concern is the Turnover-Rate.
Also included "Playoff-Dallas" in the list, which is the bold line at the bottom. The numbers are even more impressive and the turnover issue is nonexistent in the playoffs so far. They have made more Free Throws than Field Goals Attempted and have outscored the opponents 57-28. Note that these numbers include the meltdown in Game 4 in Portland. Take that out and the Mavs have outscored opponents 55-20 in the Clutch.

* Percentage of Field Goals that were assisted

This is a list of players that have scored at least 10 points in the Clutch this postseason while also holding an eFG% of 50+ and TS% of 60+. Both Dirk Nowitzki and Jason Terry are among these top Clutch-Performers. A few that are not:

Winning close games might be less relevant in terms of future playoff success but this year it could carry the Mavericks into the Western Conference Finals. And not only that. Because of their superior Clutch-Play they have a chance to sweep the two-time defending champions.