The Single Greatest Night Of My Life

Share All sharing options for: The Single Greatest Night Of My Life

My dear, sweet, beloved Mavericks fans. There are not enough words in the English language to express the emotions that I am feeling at this very moment. I just finished reading the comments that you all posted on the recap from last night, and I'm quite sure I cried at least four times. Add that to the screaming and crying that occurred last night, and you'll get a pretty good idea of how hoarse my voice is. I feel the need to share with you the single greatest night of my life, because none of it would have happened were it not for all of you.

If you ask the folks sitting around me in the upper press box last night, they will gladly tell you that I was a nervous wreck the entire game. I was on the edge of my seat (mostly because I couldn't see the court over my laptop) and fidgeting the whole time. At halftime I had to do laps around the press box because I couldn't sit still. When we entered the final quarter, my hands began shaking, and they got progressively worse as time wound down. I had such a hard time typing the recap because I was losing all function of my hands. And then, wonder of wonders, we won the damn game. I had the most idiotic grin on my face, but I had to finish posting the recap before I could do anything else, like celebrate. 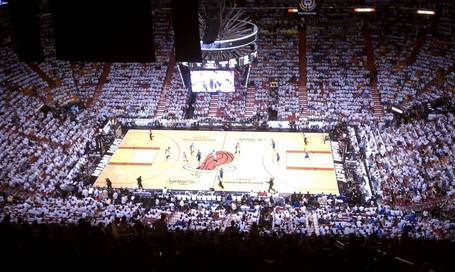 My buddy Art and I booked it down to the floor level and dropped our bags and ran, quick like bunnies, to the court. At first they weren't letting press on, but enough people complained that they eventually let us through. I made it out just in time to see them present Dirk Nowitzki with his MVP trophy. That was such a moment for me- I was getting congratulatory text messages from friends and family, trying (unsuccessfully) to get pictures of the Mavs to tweet, and relishing in the absolute pandemonium of the loyal Dallas fans who trekked to Miami. And what a moment for the team- well, you all know. You were watching. 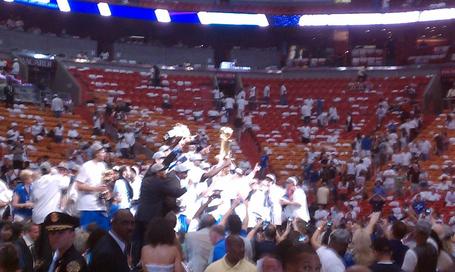 As the players began filing off stage, Art and I hustled back to wait in the media line for locker room access. When they let us in, the first thing I noticed was the overwhelming smell of alcohol... the Mavericks had sprayed the locker room, top to bottom, with champagne. I wasn't there for that part, but it was still dripping off of the ceiling into my hair, so I kinda got to partake. There was such happiness, such joy in that locker room, that not a single person could keep from smiling. Media etiquette be damned. We were all hugging and high-fiving and joining Shawn Marion in his chants of "We done SHOOK UP THE WORLD!" over and over again. 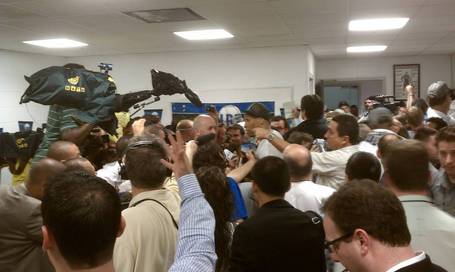 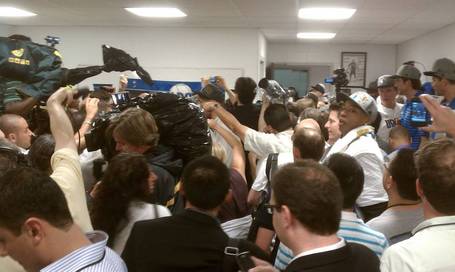 Trying to get my recorder near the players' faces was nearly futile. I haven't listened to it yet, but I'm quite sure I won't be able to understand a word anybody said. Eventually I gave up and just soaked the scene in. I got word from my insider friends where the post-game festivities were going to be, so I headed over to the Four Seasons where the team was staying to hang out and wait. There were Dallas fans hanging around, and every time a player would arrive, they would get a welcome cheer from the stragglers. Eventually the bus returned to the hotel and everyone got their dancing shoes and headed out to the club, myself included.

My buddies and I went into the club with Matrix... he pointed at all of us and said we were with him. Then we went inside and made the rounds, eventually getting down to the VIP area with the team. Standing behind everyone, up on the back of the booth, were Dirk, Brian Cardinal, Shawn Marion and Ian Mahinmi, On the floor with me were Brendan Haywood, and an incredibly excited Mark Cuban. And on the table in front of them, next to the giant bottle of champagne, was the Larry O'Brien trophy. Every few minutes someone would hoist it into the air and pass it around, and we would all rub it and cheer.

Everyone was dancing. Everyone was singing along to the music. Once in a while, the DJ would shout out to the team and we would all go ballistic. At one point, I spilled my drink on Mark Cuban. But no one cared. We were all so ridiculously excited that it didn't matter. When Marion left the club, I was standing on the back of the booth dancing (this should surprise no one) and we waggled spirit fingers at one another. In perhaps the coolest moment of my life to date, I reached up my glass towards Dirk, and we toasted each other. These were the people I spent the last six years watching on TV, and there I was, celebrating the happiest night of their lives with them.

I'm not sure exactly what time we left the club, but the sun was already starting to come up. I went from one hotel to another, seeing my friends and saying my goodbyes. I didn't leave Miami Beach until 9:30am. And on my drive home, I couldn't help but laugh hysterically at the ridiculousness of everything that had occurred the night before. I still haven't gone to sleep, and now I have to go to work!

I wished that I could have brought each and every one of you with me, so that we could have celebrated together. This blog is the only reason any of this happened to me, and you all are this blog. So, Mavs fans, with all of my heart, I thank you. Thank you for continuing to come to this humble little website and for making it grow. Thank you for being so incredibly easy to like, and thank you for giving me even more reason to love the Dallas Mavericks. With fans like you guys, what's not to love? 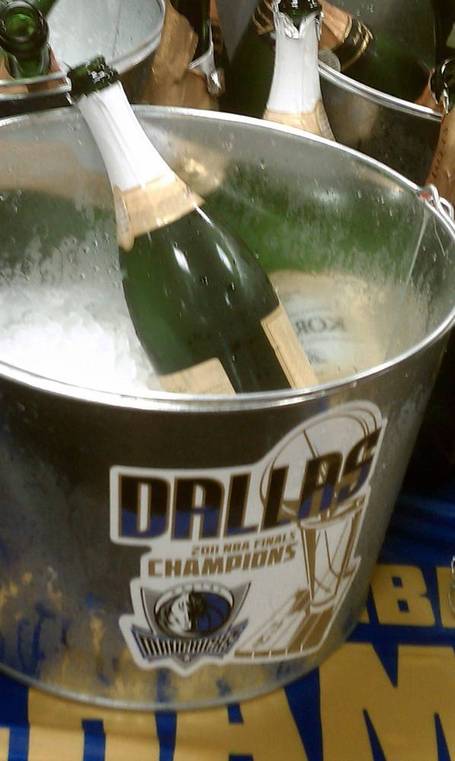