Mavericks Continue To Play Through Every Challenge In the NBA Finals

Share All sharing options for: Mavericks Continue To Play Through Every Challenge In the NBA Finals

Last night I was simply exhausted. Seriously. What's next? By the time Doris Burke reported that Dirk Nowitzki was battling a 101° fever it was yet another occasion where you just wanted to call out the basketball gods for their weird justice. But the Mavericks prevailed once again. If you go through the obstacles the Mavs have faced so far this season it's simply incredible that they are still standing. Caron Butler went down with a season-ending injury and despite the fact that nobody stated so far that it's impossible for him to come back I think we can pretty much assume that it really was season-ending. Rodrigue Beaubois didn't turn out to be the help the Mavs thought he would be. DeShawn Stevenson then reacquired the starting role and was part of a starting lineup that wasn't able to outscore anybody in the playoffs. Jose Barea and Peja Stojakovic turned from being valuable assets in the previous rounds to non-factors in the Finals. And challenges kept coming. Brendan Haywood seems unlikely to hit the court again in these Finals and Dirk Nowitzki adds a sinus infection to his injured finger.

Didn't matter. That, ladies and gentlemen, is toughness.

And while most of the nation wonders how the Heat managed not to sweep the Mavericks behind a 15 and a 9-point lead in the 4th quarters of Games 2 and 4, I more than ever ask myself what a healthy team with Caron Butler and Rodrigue Beaubois with a bit more playing time this season would have done with these Heatles. I'll give you a bold statement because I honestly think this series would be over by now. At least the Mavs would be up 3-1 heading into Game 5. No way Miami could have competed with both the Mavericks mindset and additional talent. Hey ... they didn't even handle the 7-player rotation the Mavs threw at them in Game 4. Although that's technically wrong, Haywood only played 3 minutes and Brian Cardinal isn't supposed to have any impact on a Game in the NBA Finals. Or, let's say, not on any team that's not called the Mavericks.

Let's get through some interesting stuff regarding Game 4:

Brian Cardinal was huge. I thought using him over Corey Brewer to replace Peja made no sense, but he played all his minutes with Dirk Nowitzki on the bench and Miami only managed to outscore Dallas by 2 over 13 possessions. Compared to Peja Stojakovic that's a huge boost as the team got outscored by 19 so far during this series with Peja on the floor. That some sort of negated a constant threat: Playing from behind. This was especially annoying because Miami has been the second worst first quarter this postseason. The were outscored by 22 vs. the 76ers, by 10 vs. the Celtics and by 8 vs. the Bulls, but are +6 right now against the Mavericks. Moving Barea in the starting lineup didn't pay dividends right off the bat because of too many turnovers and second chance opportunities for the Heat in the first quarter, but normally Miami was able to make runs as soon as Peja checked in. Not this time. And although Barea continued to struggle (he was 1-for-5 in the first half) the new rotation undoubtedly put Stevenson and Shawn Marion into better spots. Stevenson played exceptionally well and continued his hot shooting from beyond the arc in this series. He now leads all players in this series in 3-Point-Shooting with 56.25% (9-for-16).

The Mavericks also got away with playing Shawn Marion for only 26 minutes and it paid off. He went 7-for-12 with 16 points. Rick Carlisle mentioned that he has to find ways to get Marion fewer minutes and the Mavericks somehow got away with it without suffering on the defensive end too much. In fact, the new "closing" unit consisting of Stevenson instead of Marion outscored Miami 23-7 over approx. 22 possessions. I think the saved minutes will be huge for Marion going forward. After LeBron James took most of the blame for the loss you can expect him to come out more aggressive Thursday. But so will Marion who only played for a single possession in the fourth quarter.

And what about Tyson Chandler? He played 43 minutes because Haywood clearly wasn't moving too well. He told Carlisle that he would play 48 minutes during the game if necessary. What makes it so special is the he only committed 3 fouls in his 43 minutes. Tyson Chandler averages 4.2 fouls per 36 minutes in the playoffs which translates into over 5 fouls in 43 minutes played. He normally should have been in foul trouble the whole way. That's not only adjustments from the coaching stuff but also from the players themselves.

And finally Dirk did what he does. Finger injury and infection didn't matter. He continues to dominate the NBA Playoffs in 4th Quarter Scoring with 190 (Kevin Durant 2nd with 133) and Clutch Scoring with 62 (LeBron James 2nd with 43) while posting shooting numbers that nobody in the Top10 can match. Since Tom Haberstroh marked LeBron's Clutch Play as unmatched in recent years, Dirk went on a run and outperformed LeBron in every possible way. He now tops that list with an eFG% of 59.62 in the Clutch.

Regarding the Miami Heat: I kind of disagree on the LeBron case. Everybody stated before the Finals that they could make up for an off-night of one of their three stars because they've got two more. But it really isn't that simple. Last night Dwayne Wade and Chris Bosh went 22-39 (56.41%) and 56 points while LeBron had his "off night". Note that the Big 3 scored 77.11% of Miami's points. That's usually enough for them to win. But because the supporting cast was exceptionally poor going 7-for-25 (28.00%) and 19 points they came up short.
Then finally the Mavericks got credited for their hard work (and another small 2006 reversal): Wade missed a crucial free throw that could have tied the game. But basketball gods: Don't think we owe you one now. Wade struggled with his free throws all postseason long (as you can see below). He only shoots 77.50% form the line and 66.66% in the Clutch. That makes him second worst among players that at least attempted 10 free throws in the Clutch. Chris Bosh and James are a combined 25-for-25. 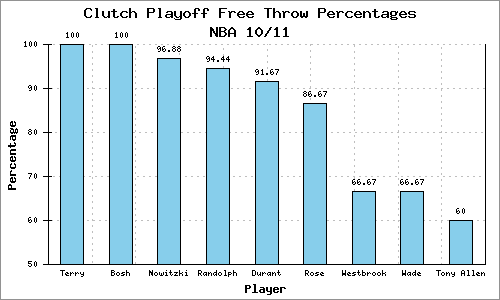 With Erik Spoelstra now in the need of making adjustments you can be sure that the next challenge for the Mavericks is right around the corner. So I guess we'll continue to ask: What's next?