NBA Finals: A German, a Chandler and a JET.

Share All sharing options for: NBA Finals: A German, a Chandler and a JET. 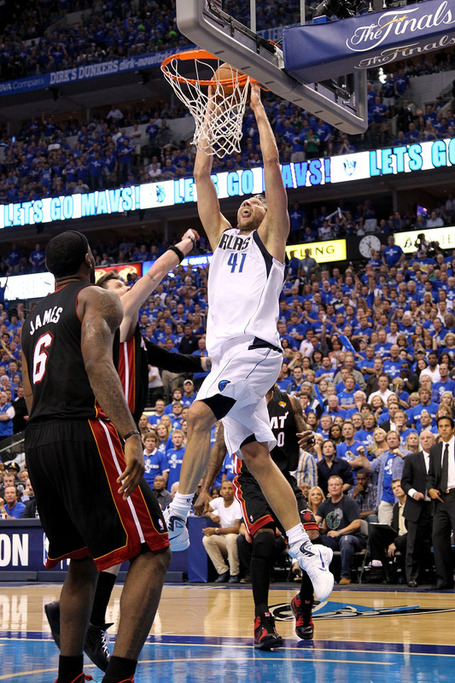 Game 5, the one after Game 4. The first quarter is always an active one for the Heat. Playing defense, attacking the basket, flopping for calls and crying to the refs. The Mavericks started it off with a quick pace, outscoring the Heat and taking an early lead. Some good defense by the Mavericks, i.e. Kidd, made the Heat turn the ball over leading to some fast break points for us and a few shot clock violations for them. Unfortunately, Super Famicom hit another half-court shot to end the first and the Heat had a 31-30 lead heading into the second. Brian Cardinal or Bobby C as he's known around here, tried drawing a charge against some player named Wade and did not get the call, but Cardinal did manage to hurt Wade.

Wade went to the locker room with no wheelchair this time and came out in the second quarter. He was listed as questionable. All lies, don't believe all that bologna, he kept playing. The second quarter was a bit sluggish compared to the fast action in the first. Jason Eugene Terry hit a 3 as the shot clock was expiring, the bench scored but couldn't play great defense. The pace picked up and Dallas went on a 10-2 run towards the end of the 2nd. Dallas shot 66% going into the half and the score resembled one from a 3rd quarter of the past four games, 60-57 Mabs. It felt like a bigger lead than 3, maybe because our offense was playing the way we wished they did in the previous games.

The third quarter started with me in the kitchen opening a beer and missing some Matrix flippedy doo dah, some 3's by both teams and apparently Wade went back to the locker room. To cry maybe? Who knows. Dirk hit a double rainbow 3 pointer with three seconds on the shot clock midway through the quarter, it was so beautiful that Lazarus was revived, AGAIN. Not wanting to be shown up, JJ Barea hit a 3 on the next possession. Lazarus quickly passed on to the next plane. The Mavs played some great basketball and took a 80-71 3:46 into the third, this was the largest lead in the Finals. Oh guys, did I mention that Wade came back and checked himself right into the game, what valor! Meanwhile in real life, Wade's teammates cut down the lead to 5 but a JET hit back to back jumpers to hold steadfast. The quarter ended with Lebron pouting at the ref for a non call and The Mavs leading 84-79.

Fourth quarter time, where all the marbles are won, lost or stolen by a bully. (I miss my marbles). Speaking of bullies, (transitions, kids!) Juwan Howard greeted Deshawn Stevenson with arms to head as Stevenson drove to the basket. Flagrant foul to start the 4th. Steve got 1-2 and down the other end Wade got free throws, not surprised. JJ Barea did some fancy sshmancy pants move and got an And-1 to get the lead back to 7. A parade but not the fun kind got the Heat back in the game. Los Mavs played well but the Heat got some easy layups/shots and took the lead for the first time in the 2nd half, 96-95 with 5:16 to go. Damn, stuff just got real. I'm not writing as I should be because this game is crazy. So the Heat go up, then we start coming back. Some dumb turnovers and I'm freaking out.

Dirk does his usual awesome stuff, Kidd hits a HUGE 3 and gives us a 105-100 lead with 1:26 left in the game. Mad props to Tyson Chandler for taking a crucial charge against Lebron and for a great block on Wade. Late in the game Haslem is denying the pass to Dirk and what happens? THE. JET. He takes a 3 and gives us a 7 point lead with 33 seconds to go! Oh man, Dirk dunked! How could I forget! The Dallas Mavericks have a 3-2 lead in the NBA Finals. I'm pretty jubilant and my thoughts and writing have left me. Just know this, we fought for this win.