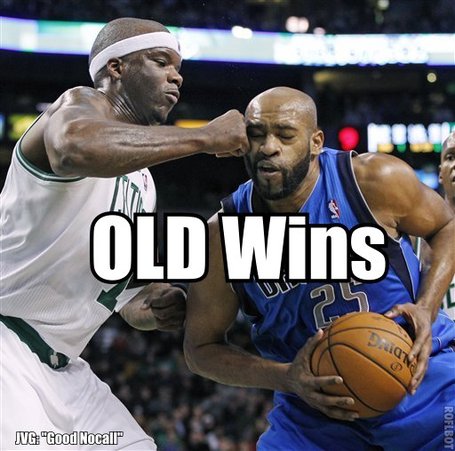 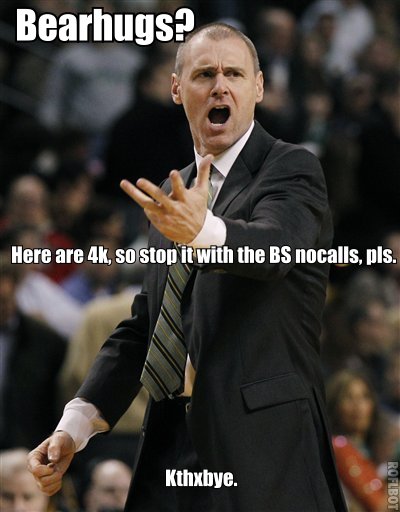 (On 2 Techs) "It's my opinion, but Kevin Garnett shouldn't be allowed to bear hug Dirk coming off the screen. I just thought that that was something that shouldn’t be allowed and I’m pretty vigilant about my feeling about that. It’ll cost me a few dollars, but you know what, you’ve got to make the point. It was a foul that should have been called and that’s the way it is."

(On the Mavs) "We needed everybody. Look, there were timely plays made the whole second half, and guys like Rodrigue Beaubois coming in and getting a steal here and there and making a couple of shots helped. Ian Mahinmi gave us good energy. I loved Lamar Odom in the second half. He played with great energy. A game like this comes down to a lot of little things and the sum total of our game is a lot of good, solid plays being sandwiched together. The guys did a good job of that in the second half."

(On Dirk's last play) "Tremendous play. He made the right read, Garnett got real close, drove it and made the shot."

(On West) “He’s set the tone in recent games with his competitiveness, particularly at the defensive end. And he was great in Detroit, but he’s been really solid all the way through and each game he gets a little bit better feel for the team.”

(On Dirk with 11 shots) "He’s a great player and every team in the league’s game plan is to keep the ball out of his hands. Our execution has got to be good, and we’ve got to find ways to get the ball to him.’’

(On the Win) "It’s really big for us to be able to get three wins without Jason Kidd. That’s a huge loss for us. And the team is finding itself a little bit, but this is a very challenging year on a lot of levels. But the guys are meeting the challenge."

(On Progress) "It’s all about how we compete. We’re building some consistency with our competitiveness. We’re getting a little more familiarity with our new guys and the challenge will be to carry this into Friday night." 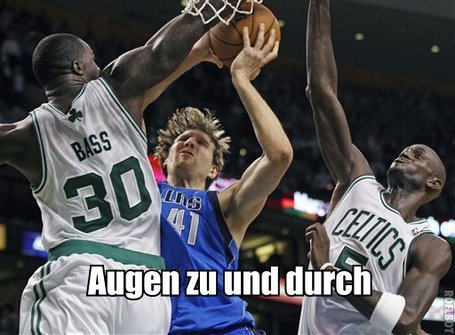 (On Carlisle’s ejection) "Sometimes the coaches do it to change the momentum a little bit. Sometimes it’s a momentum-changer."

(On his last play) "JET set a good screen and I was able to get some separation on the catch. I saw the clock going down and he was really up tight on me, basically making me put the ball on the floor and that’s what I did. I was able to get to the rim, didn’t even see the ball go in to be honest. I just threw it up there. I saw the contact and was a little lucky it went in."

(On Clutch) "It's a fun situation to be in. Everybody's looking at you and your team really depends on you, so I like to be in the position where I can make something happen."

(On West) "He’s the head right now with the way that he’s doing it at the defensive end. His energy, getting after it, and then offensively making sound decisions, he’s penetrating, he’s finding guys in rhythm and he’s just playing solid."

(On Carlisle's Techs) "It could have been a turning point and it could have gone south quick, but when you’ve got guys like Terry Stotts who’s been a head coach in this league, he settled us down right away. Guys started to communicate and Delonte did a great job of maintaining the team’s composure." 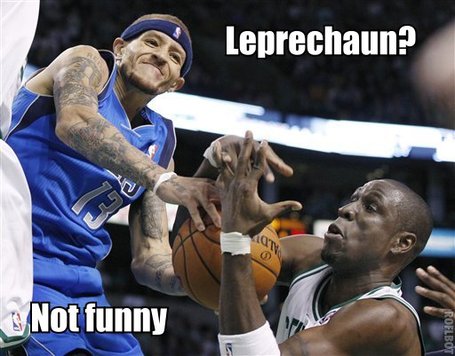 (On the Teams) "It’s early in the season, and there’s no indication where both of these teams will be come June."

(On Dirk) “I can’t ask for a better compliment than for a player of Dirk Nowitzki’s caliber, after he made an amazing shot to win the game, he ran over to me and said, ‘We’re gonna get this game for you.’ And that’s got me on an emotional high right now."

(On the Mavs) “I just like where we’re at as a team. I love our fight in Boston. There were a lot of emotions on our bench, period, and it was for the best. There were a lot of ups, a lot of downs, throughout the game for everybody, a lot of guys getting in each other’s face for the right reason, pulling each other along. And in the end that’s what’s making us more of a team, more of a unit and it’s turning us into a family.” 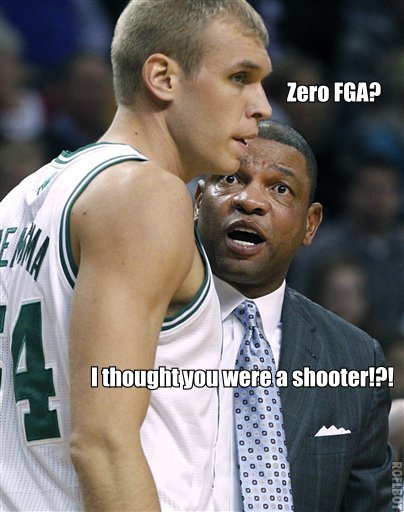 (On Dirk's last Shot) "He drove from close to the 3-point line and got all the way to the basket. I thought we overplayed him, I thought Kevin got so close to him, that, you almost said, 'Dirk, please drive.' He didn’t have much of a choice."

(On Nopass-Bass, Help-Defender) "Even on the last drive -- you’re always kicking yourself with plays -- I was about to put Jermaine O'Neal in, because I thought he would block the basket. But we thought, with Brandon, with the way he was rebounding and playing -- it’s easy to second-guess afterwards. You know how that works. Somebody has to step up and either block it or take a charge on Dirk."

(On West, former Celtic, now a Mav) "The old saying is, after the game, they should know your name. I guarantee you when you're done playing against Delonte West, you know Delonte West. And that's big for your team. He's an instigator. You need a lot of those and he's one for sure. We're going to miss his toughness.''

(On Mickael Pietrus' first game with the Celtics) "He’s exactly what we need. And it’s just going to get better. Even if it didn’t, I’d take it. Really. He was terrific. He really was. His energy, his joy – he brought joy to the game. You know, you can just see it... He was so happy to play, and really the only reason he came out (in the fourth quarter) was because he was dying. He was getting tired and I had to take him out." 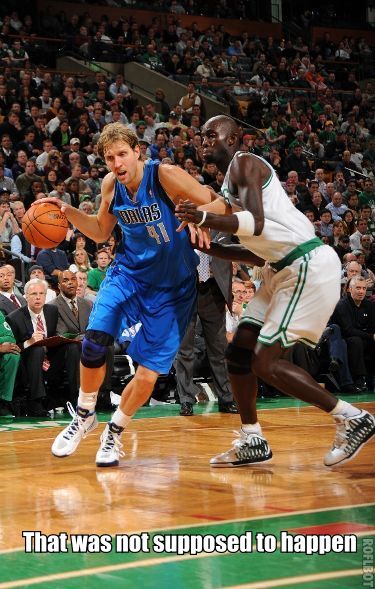 (On Dirk's last Shot) "I just tried to make it tough for him, a player like Dirk has like a million moves. I just tried to play his consistencies, and make it tough for him, and he made a hell of a shot. That’s what it was. I didn’t want to give him a chance to get into his arsenal of moves and pump fakes and that stuff. I wanted to make him make a decision. Like I said, man, a player like him, you just try to give him different looks. Make sure you put a hand in his face."

On the last basket, Garnett was absolutely insane to pick up Dirk that close to the three-point line. Call it foolish, old pride as the 25-year-old KG might have been able to hang with Dirk on the perimeter but not anymore. Dirk blew by Garnett and his 17 handcheck and body fouls before finishing a circus shot and-1 over former Maverick Brandon Bass. Dirk has the reputation of plenty heroic fades and jumpers but the German has quietly complied quite the list of game-winning and game-tying layups, dating back to his legendary layup against the Spurs in Game 7 in 2006. Basically, Dirk is just the best and no one should ever doubt his immortality.

Pierce looked tired all night but made two clutch plays in the final minute to dish the ball off to Garnett and then hit the big 3 to tie it with just seconds left.

Of course seconds was all that Dirk Nowitzki needed to do Dirk type things and take the lead. It seemed like a good time to go to Ray Allen. The ever reliable Ray Allen. The guy that never makes critical mistakes... except this time he did. The pass was a little low, but he took his eyes off it long enough to lose it between his feet and that's all she wrote.

Dirk is Dirk. I was just thinking right after the Pierce three to tie the game that the Celtics have kept Dirk Nowitzki really quiet tonight (4-10, 13 points till that point). Then the last play happened and well, you know, you don’t really get to be the Finals MVP by being lucky or just okay.

There was a moment in last night’s game (alright, two moments but we’ll get to the second one later) where I tweeted something to the effect of, "good offense will ultimately triumph over good defense." This was right after a play where Kevin Garnett was blanketing Dirk Nowitzki and the reigning Finals MVP still banked in an off-balance jumper.

Jason Terry (18 points, 7-16 FG, 3-8 3FG, four steals) will undoubtedly receive the most praise for his late-game shot making, but I can’t say enough about how well he defended Ray Allen on Wednesday. Chasing Allen is one of the league’s most thankless tasks; his defender is constantly forced to expend energy, has precious few opportunities for steals or blocks against Allen’s lightning quick catch and release, and is only really noticed when Allen becomes curiously open for a three-point attempt. JET took on the task — in addition to his offensive responsibilities, which included handling the ball against hellhounds Rajon Rondo and Avery Bradley — and chased Allen into a nine-point performance. Beautiful defensive work by a player who, for all his flaws, really does make consistent efforts to improve his D.

The Mavs shot 3-12 from long 2 Range. This, Ladies and Gentlemen, is the best Jumpshooting Team of the Last 10 Years.

Haywood bricked six of eight from the line. So far he is sporting a still strong brickrate above 50%. Celebration for our third best Center, Beaches! [nsfw]

On the other Hand, Dirk missed none of his six FTs. That's what he does.

Outrebounded? Surely not, 43-35, as Both teams stayed in the mid 40s, percentagewise 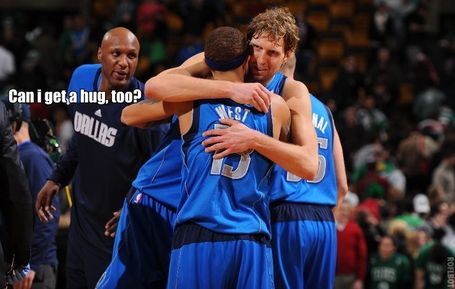