Should Mavs Take A Risk In Giving Odom Extended Minutes?

Share All sharing options for: Should Mavs Take A Risk In Giving Odom Extended Minutes? 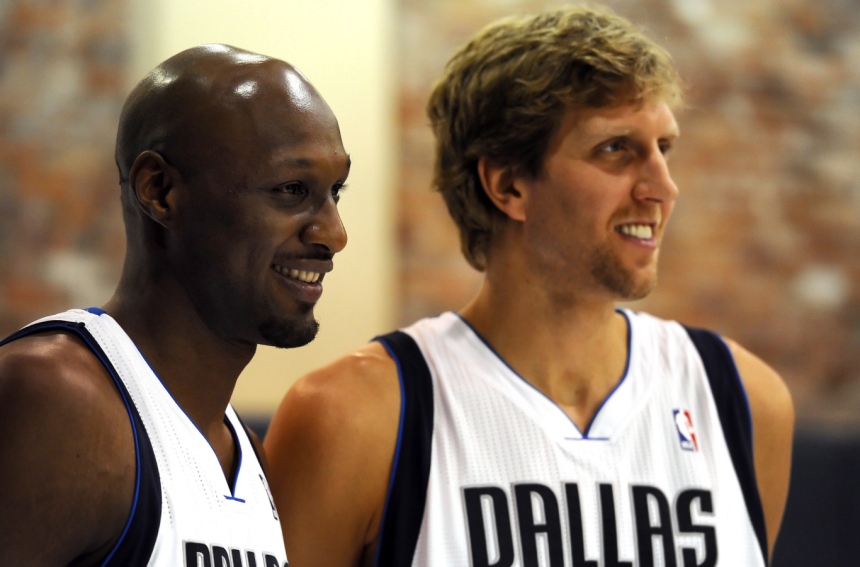 Will they ever smile again?

END_OF_DOCUMENT_TOKEN_TO_BE_REPLACED

Chris Mannix of SI.com wrote an article yesterday about the ongoing struggles of Lamar Odom in Dallas and finished his article with a quote that, using the words of Mavericks play-by-play announcer Mark Followill, "won't exactly set your mind at ease."

His per minute/possession stats reflect his discomfort on the court pretty good. Fouling and turnovers increased and assists are down. He also takes a lot of threes, because sometimes he doesn't know what else to do with the ball, a behavior we all know a bit too good from Roddy. He shoots 11-of-30 in the Paint (36.7%) and is getting blocked 7.69% of the time, which leads the team behind Shawn Marion. The only bright spot of his game so far is that he is getting to the line at a reasonable rate, but his percentage there is down, too.

And what if the envisioned forward-nightmare-lineup for every opponent won't work even with Odom slowly getting into shape? Marion, Dirk and Odom together on the floor have resulted in a Defensive Efficiency of 161.66, getting outscored 33-48. In fact, all numbers from lineups consisting Dirk Nowitzki and Odom look, well, improvable.

Add to the ongoing concern that Odom right now is behind Vince Carter and Brian Cardinal in decisive game situations. That's not something you want to see. On a night where Carter posted a PER of -3.9 (and don't expect other metrics to look better), he nearly doubled Odom in minutes played. What does this say about "the hubbie?"

Carlisle apparently takes the same approach with Odom as he does with other players he doesn't entirely trust. They got their limited spot in the rotation but won't be on the court when it counts, like yesterday. Jeff van Gundy rooted for Lamar to hit the court late in the game yesterday and I tend to agree with him. Sometimes this 'play-when-you-produce-otherwise-sit' doesn't fare well simply because certain players/characters need playing time to develop chemistry and confidence on the court. Doc Rivers played Paul Pierce for 30 minutes although he is clearly out of shape and had completed a one-hour treadmill workout prior to the game, because the Celtics know they'll need Pierce going forward. And the Mavs will also need Lamar at the very least to help minimize Dirk's minutes. Although Dirk currently ranks pretty low at 65th in minutes per game (31.67), he played 38 yesterday in a close game and that could develop into an ongoing concern. Don't want to make too much out of a single game, but this season you may want to sit Dirk for at least 15 minutes even in a competitive close game. And with Odom this is perfectly possible if he'll somehow find his rhythm... you could even talk about a timeshare.

You don't have to be overly concerned right now. Hit the panic button if Odom plays like this by the time the All-Star Break is around the corner in February. Because the schedule will majorly toughen up with quality opponents and a 9-in-12 stretch in March. Until then it looks fairly manageable. The Mavs have a four game road-trip coming up in L.A. (playing both the Clippers and the Lakers), Utah and New Orleans but outside that I think now is the time to give Odom playing time even when not producing like anticipated. Looking at opponents it shouldn't result in any additional losses down the stretch.

Besides that it's not like Carlisle has a choice. Odom might be more or less expandable at this point of the season, but not in the near future. Because of the slow start into the season Carlisle stated he wants to win games now, but it's really not that dramatic. Dallas is one game behind the Spurs in their division and the arch-rivals will be without T.J. Ford and Manu Ginobili for a long time. The injuries are stockpiling throughout the whole league anyway and the Mavs are not in any sort of trouble to miss the playoffs.

So the time of taking a risk with playing Odom while not producing up to potential is now. The Mavs could benefit more in the future than they give up right now.