Breaking Down the Fisher Game-Winner

Share All sharing options for: Breaking Down the Fisher Game-Winner

After wrapping my hand in tape and icing it for 20 minutes, I tried to make sense of the Mavericks defense against the Lakers on the Derek Fisher game-winner. There are differing opinions out on Twitter and various sites out there. Was it bad defensive philosophy? Bad execution? A combination of both? Or did Derek Fisher just hit a shot the Mavs believed was the lowest percentage shot in that situation?

First, here's video of the entire play for some reference:

Now that you've watched that, it seems upon first glance the Mavericks got exactly what they wanted: They forced one of the best late-game shot makers of all-time to pass off to a walking corpse in Derek Fisher for a deep, contested three over the outstretched arms of a seven-footer.

And the philosophy is backed up by statistical data. Fisher is shooting 22.7 percent from three on the year and, according to Synergy Sports, that mark is practically the same for spot-up attempts (22.2 percent). Again, the philosophy seems sound for most.

Perhaps I'm just in the minority, but I disagree with the decision for Jason Terry to double...at that time. Here's when Terry decided to leave Fisher to double Bryant: 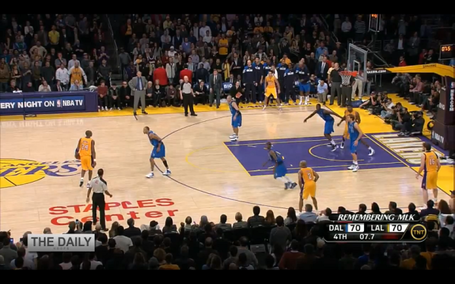 There's still 7.7 seconds left when Terry decides to leave Fisher, plenty of time for Kobe to make a simple pass to Fisher for a catch and shoot three. If you're going to double Kobe, why not wait for the time to run down a little more and force a more contested pass? And, if you're set on forcing the ball out of Kobe's hands right then and there, why is Dirk so far parked in the paint if he's the guy to slide over to Fisher to prevent the three?

Dirk should be closer to the free throw line. And here's some evidence to really hammer that home (courtesy of our very own, DOH): 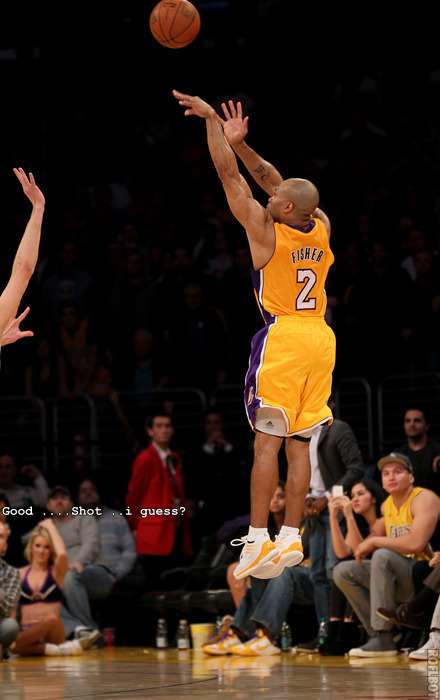 I'm not sure what you think, but that looks like a fairly uncontested shot. Dirk's closeout isn't impacting Fisher's release point at all, as Fisher's shot is well on its way before Dirk is even in the frame. If the Mavericks were dead set on forcing a Fisher three with a rotation to closeout, they should have used Ian Mahinmi or Lamar Odom to "guard" Pau Gasol. That, or get closer closer to the free throw line so Dirk doesn't have to go as far to contest. It appears Dirk is cheating on Andrew Bynum to prevent the smaller Mahinmi from getting pinned down next to the basket. I understand Mahinmi is outmatched by Bynum, but helping that much when you know the defensive plan is for Dirk to rotate to the open shooter seems slightly foolish to me.

Me personally, I would have let Shawn Marion (who did a marvelous job forcing Kobe into a 7-for-22 shooting night) a bit more leash on defending Kobe, perhaps wait on the double team. Doing the double-team that early in the possession felt like a give-up, a bailout allowing the Lakers a free shot from someone who's made shots like last night's multiple times before. Again, that's where I'm in the minority I feel. I have no qualms with the Maverick's philosophy on that play. Forcing Kobe to pass the ball off to a sub-25 percent three-point shooter is still pretty good defense. But I definitely have some disagreements with the execution and timing.

Disagree, agree? Leave your thoughts in the comments or attack me personally on Twitter!