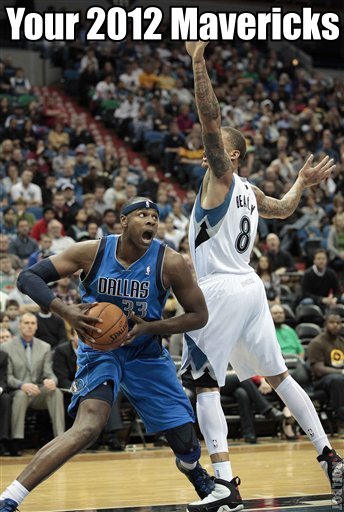 Happy New Year to you, too. 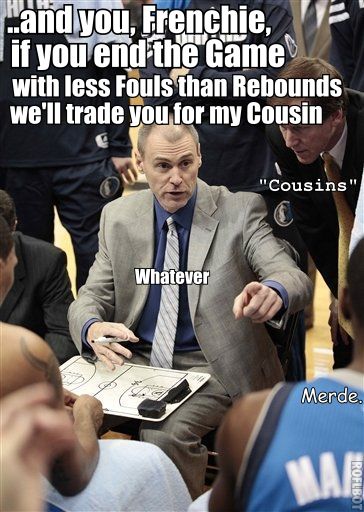 (On the Loss) "The Timberwolves had a lot of guys play well. What we’re going to have to do is do a better job of not allowing guys to play well. We made some good runs, but it’s very difficult playing from behind in this league. It’s become too much of a consistent theme. We’ve got to correct it. We’ve got to be really good at the beginning of games and we have to carry it forward."

(On the Mavs) "We have to get better tomorrow and keep moving.Try to get ourselves back moving in the right direction."

(On the Mavs problems) "We've got problems at both ends, but I'm always going to err on the side of feeling the defense is the most important. In the 10 years now that I've been a head coach in this league, the defensive end is always the key to success."

(On Love's Threes) "All night long Love hit timely threes when we were making runs. He’s improved every year and he’s gotten better this year. Those things hurt us."

(On the Schedule) "The games are going to keep coming. We have to address the things that need to be addressed and get ready to play the next one. There’s no other thing for us to do right now. We’re still looking at different lineups, but there are no excuses - everyone has to play. We just have to play better." 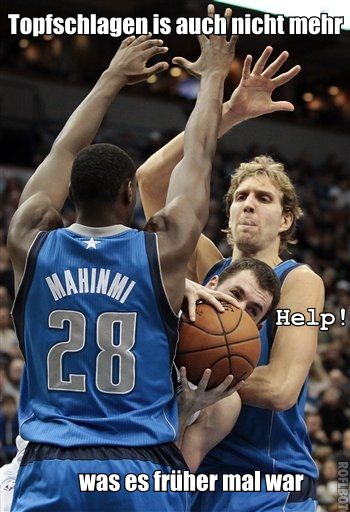 (On Love, Three-deep) "That three-ball was deadly. You’ve got to give him credit. He made some big shots when they needed them.’’

(On the Mavs) "We’ve got to get sharper on the fly and get everybody in better shape as we go, get the legs stronger and just play better as a team. We don’t really have much time to practice, so we’ve got to get better from the games." 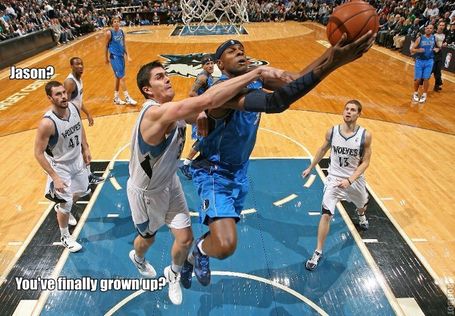 MINNEAPOLIS, MN - JANUARY 1: Dallas Mavericks Jason Terry #31 drives to the basket past Darko Milicic #31 of the Minnesota Timberwolves during the game on January 1, 2012 at Target Center in Minneapolis, Minnesota. NOTE TO USER: User expressly acknowledges and agrees that, by downloading and or using this Photograph, user is consenting to the terms and conditions of the Getty Images License Agreement. Mandatory Copyright Notice: Copyright 2012 NBAE (Photo by David Sherman/NBAE via Getty Images)

(On the Loss) "We can’t worry about his one, it’s gone. We didn’t primarily play well - nobody - tonight. I know myself, personally, I pride myself in taking care of the ball and making shots. And that didn’t happen tonight."

(On the Mavs) "We’ve got to keep grinding. The games come quick. We’ll be right back at it tomorrow." 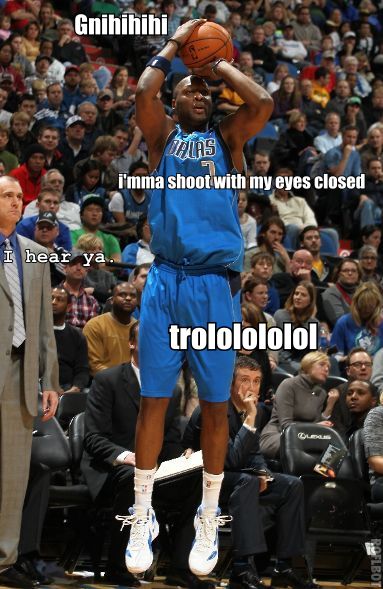 (On Love) "He’s almost like a new version of Bill Laimbeer to me. Almost Laimbeer-like. But a little bit more athletic.’’

(On what the Mavs can do) "Go out and try and take it game by game and go get ‘em. All we can do now is take our time and chip away." 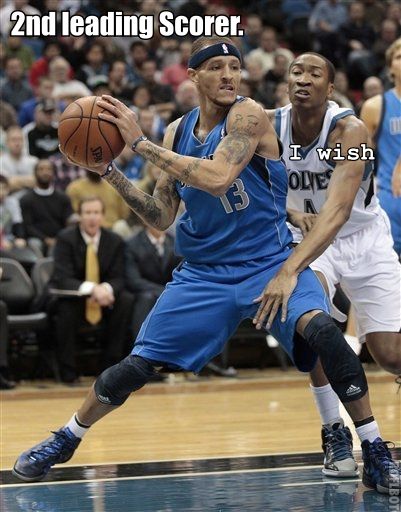 (How's your spanish?) "Their point guard made some great passes. The one he threw between guys' legs -- the bounce pass -- me coming from the Celtics, that was very Bob Cousy-like."

(On the Mavs) "But we've just got to tighten up. Coach can only do so much. They can draw the plays up, but we've got to go out and execute.'' 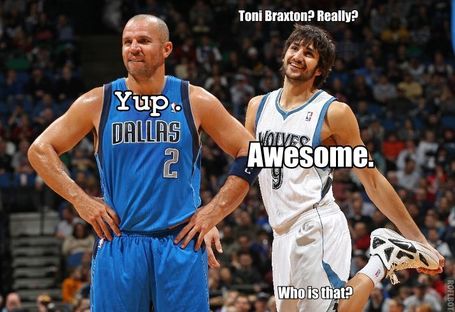 (On the Game) "I think at the end of the third we just ran out of time. If there was more time we had the momentum in our favor. But we came out to start the fourth and we were down 10-12 points right off the bat. We got a lot of new pieces and we’re trying to do this on the run. And so, we’re going to make mistakes and we just need to try and get better."

(On the Loss) "This is a game. It’s not life or death, so there is no concern. We’re all professionals, we’re all trying to do our jobs, and all we can ask is for everybody to give 110 percent."

(On the Mavs Looks) "We’re getting wide opens. The ball just isn’t going in. It happens. You’ve just got to keep taking the shots that present themselves and hopefully, sooner than later, that they start dropping."

(On the Mavs Games) "We had a good one in Oklahoma City the other night when Durant makes a tough shot to win it. We’ve got to put ourselves in a position to protect home, and we haven’t done that yet this year." 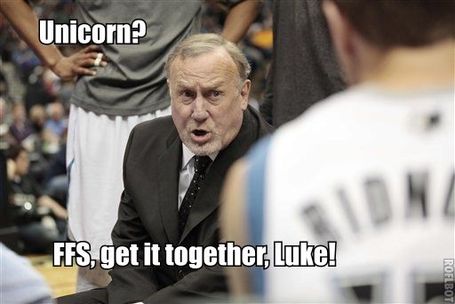 (On ending the 18 Game losing streak) "I still don't take credit for those 15 losses last year. I had enough trouble with the three we had this year."

(On the Game) "We responded against a very good team few good men tonight. They made runs at us and we responded each time. Down the stretch I thought we executed really well and made stops when they had the ball. That's what you have to do to win games down the stretch."

(On the Wolves) "I'm really happy for the players. They've been working hard and stayed with it." 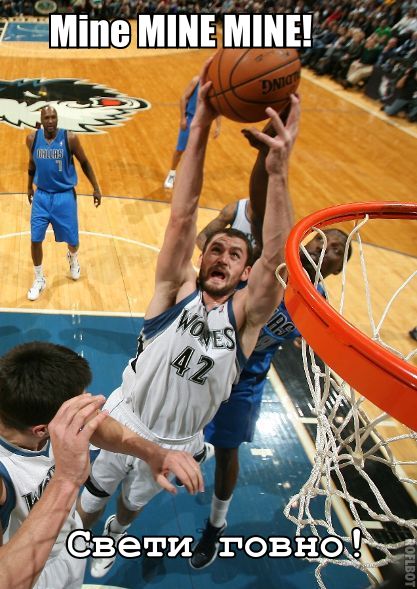 (On the Win ending the Losingstreak) "It's a new year. We're the best team in 2012 right now. We feel good. We've got the monkey off our back."

(On the Win) "We are just looking everyday to get better and tomorrow we are living in the present. Tomorrow we are coming out against San Antonio and hopefully have a good game. But we're going to enjoy this tonight." 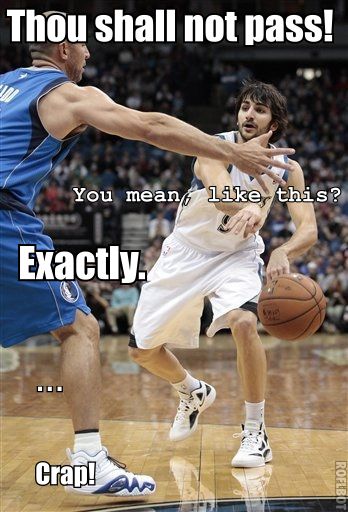 (On the Win) "I came here to win. We need the feeling of winning a game. The first three games we came so close. We were behind in those games. Tonight we learned how to play when we were up."

(On his shooting) "I worked a lot this summer on shooting jump shots and all the stuff. When you work hard, things are coming, The lockout gave me extra time this summer to work on my shot. The last two years I've been working to improve my shot. I was never worried about it." 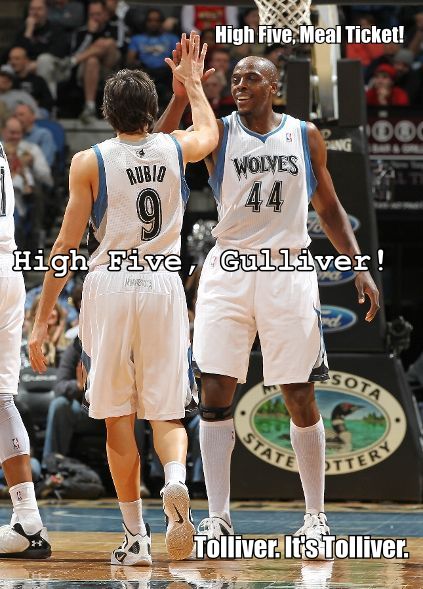 (On the Win) "Man I haven't felt that feeling in a long time, to come off the court with more points than the other team,"

(On Rubio's passing) "I told him, I know I'm getting used to playing with you when I actually expected him to bounce pass the ball through Dirk's legs to me in the corner so that is why I was so ready for the shot. He made it perfectly and hit me right in the hands. From day one we've played pickup and I've always got to have my hands ready with that guy."

(On the Wolves) "We're just continuing to work hard. We learn from every game and we got some stuff to clean up from this game and we will take it into tomorrow and continue on from there." 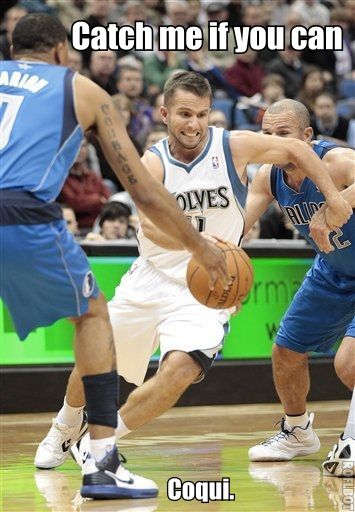 (On the Win) "It was awesome. I’m so proud of my team right now, they did such a good job.

(On beating the Mavs) "It feels so good to beat your old team. We did a great job tonight, we were consistent.’’

(On letting the Mavs within 2 with 5 mins left) "I told the guys, ‘A Mavs run is coming. You just have to keep fighting and answer back.’ I think we answered back tonight."

The Mavs remain a team that’s shooting too poorly and playing too stupidly for those flashes of brilliance to be enough against a team that’s playing well, even when that team is the Minnesota Timberwolves, who are talented, but who are also a team in the sense that Frankenstein’s Monster is a physical ideal of classical proportions.

Dirk tried to do his best Lord Voldemort impression by attempting to draw blood from a unicorn. It's valuable stuff, we know, but your karma will pay should it be spilled. Half life and stuff.

Aside from keying Dallas’ only bit of efficient fourth-quarter offense, Nowitzki played poorly. We can talk all day about how awkward this team looks overall in terms of its ball movement or lack of defensive synergy, but this year’s Mavs don’t stand to win many games in which Dirk isn’t rolling.

Haywood bricked none of two from the line! So far he is sporting a decent brickrate of 54.5%. Celebration for our third best Center, Beaches! [nsfw]

On the other Hand, Dirk did not miss his one FT. Crazy!

Lamar Odom with 3 casual misses. Keep it up. 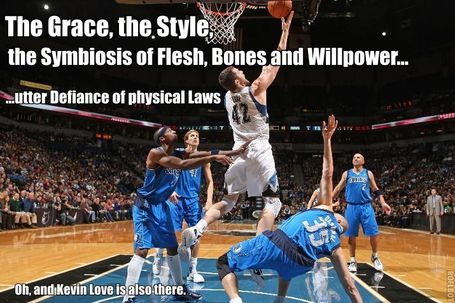