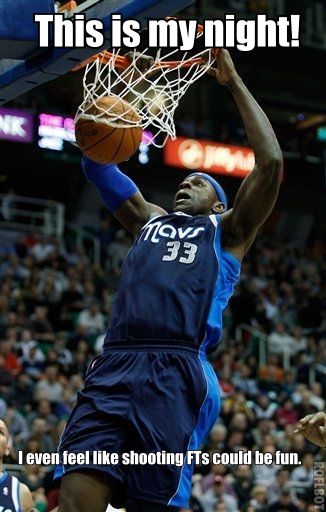 29 Minutes, perfect from the Field and the Line, 6 Points total. 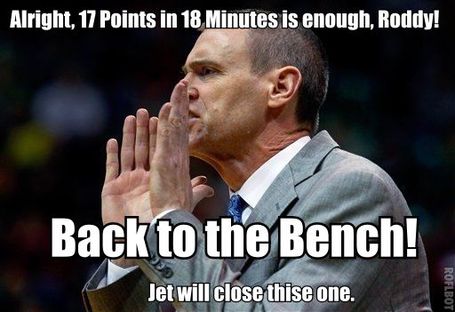 (On the Win) "It’s as good a win as we have had all year for a lot of reasons. No. 1, what we have been through the last couple of games, and to bounce back is huge. And, you know, in this building you are in altitude. This is as loud a place as there is. Tonight, this was louder than I have heard all year."

(On Rodrigue) "Beaubois was great and we couldn’t have won the game without him. With him it’s all about developing consistency. He’ll throw two or three good games together and then the Clipper game was a step back. But tonight, he came out, he settled the score and got it right. He’s really important. His quickness we can’t replace, and when he plays the way he did tonight he’s an energy player for us, which is really key."

(Talk more about Beaubois's performance) "He was sensational tonight. He didn’t play well last night against the Clippers, and tonight he kind of came out and evened the score. He got into the lane, and he made some things happen on both ends of the floor. I can’t say enough about his performance tonight."

(On Terry's Three) "It's the fourth quarter. The truth was Beaubois was exhausted so he had to come out. Jet's been there before. I've seen plenty of nights where he's not shot it good, and then in the fourth quarter he'll make a big one. He's our guy. That shot was as important a shot as we've hit all year."

(On Wood) "Haywood's been great the last few games. Utah was probably his best game of the year because he did everything well. He defended well. He was a presence on offense and around the glass. He made his free throws. He does a very solid job on Jefferson and there aren't many guys who have a feel for playing him because he's such a unique low post scorer.''

(On the Mavs) "We're making steady progress. But it is work. We got to continue with it. It doesn't happen overnight. It simply doesn't."

(On the Jazz) "Tyrone Corbin is doing a great job. They have lost a lot of key guys - Andrej Kirilenko and Mehmet Okur.. These young guys are playing hard and playing within the system and their big guys are getting better and better." 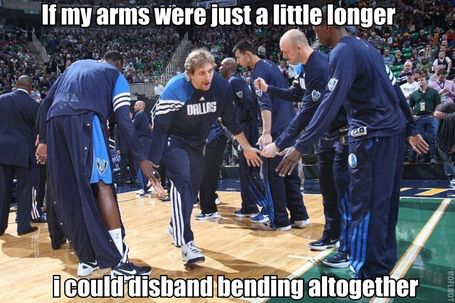 (On the Game) "Myself and JET couldn’t get anything going tonight, so Roddy and ‘Trix definitely bailed us out."

(On another breakthrough game by Roddy) "He keeps teasing us. This is definitely the Roddy we want to see."

(On getting booed by the Utah fans) "We get along great." 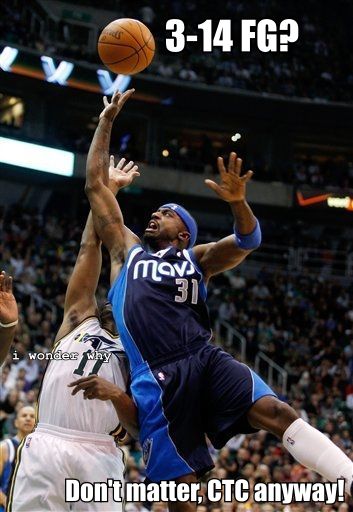 (On the Mavs) "Offensively, we had a rhythm. Roddy Beaubois stepped up. If we can get that from him on a consistent basis we’re gonna be a heck of a team."

(On New Orleans next) "We’ve gotta have this win Saturday, to make up for those two losses in L.A.. These two are must-win games for us and we should be 3-0." 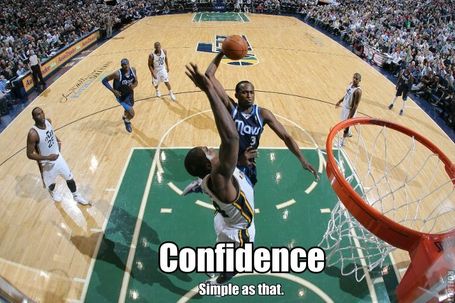 (On his Game) "It was just one game. For sure, I did some good things but I just wanted to be very active tonight. We needed to win this one after the last two games we lost."

(On what this means) "It means a lot to play well when they call on me. Management wants me in that Barea role, coming off the bench and annoy friends and foes alike and that means they have confidence in me. I have to come out and play well every night that I’m in the game." 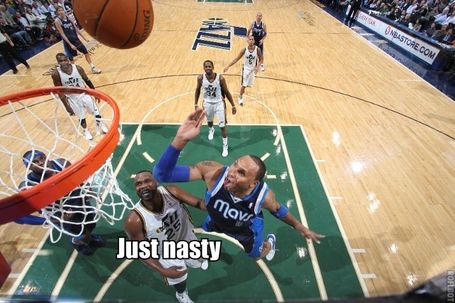 (On the Game) "It was just so intense out there. Everybody was getting after it at both ends of the floor. It was just fun and very competitive."

(On the Jazz) "We hung in there. We knew they were gonna make a run. They’re a young and energetic team that plays hard in this building, but we kept our composure. We were able to respond after every run they made, we kept our heads and just stayed after it."

(On Layups) "I had some great positioning and I was able to get what I wanted to. We know we're taking baby steps in the right direction. We're still just trying to learn from mistakes and get better every game." 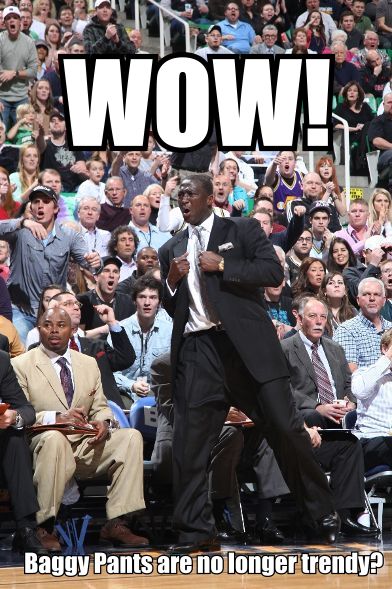 (On the Mavs) "They're good. That's a good ballclub. They did the things they needed to win. They made the big shots and they are a good team. We put up a good fight, but came up short."

(On Techs and physical Play) "We've got to be smarter about it, but we don't want to get pushed around by anybody. They made the calls. I like to see the fight; we're not going to let anybody push us around."

(On Watson) "He gave us everything. You have to love his fight." 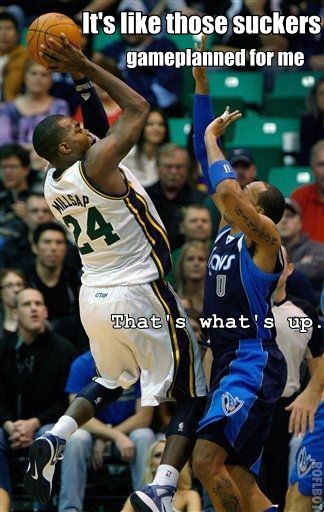 (On the Game) "We didn't come out with enough energy and intensity in the first half and they jumped on us. That was the turning point of the game. You got to bring it." 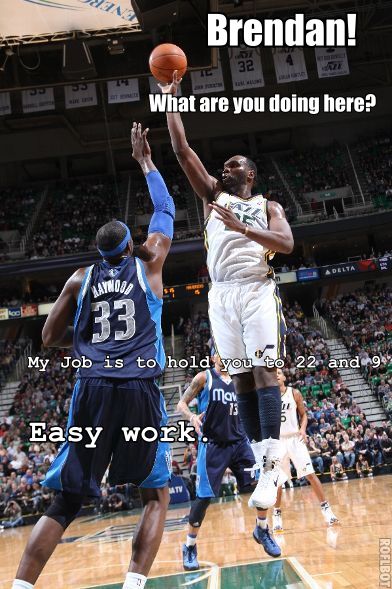 (On the Mavs) "They had some big buckets down the stretch, and we had a couple of times when we couldn't convert and the stress got to us." 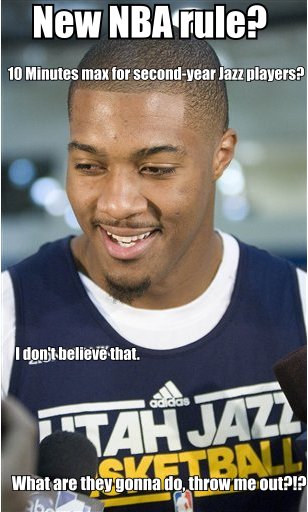 (On the scuffle and ejection) "I was pretty frustrated. There were a lot of emotions in the game. It was tough. I let my emotions get the best of me, and I've just got to control them." 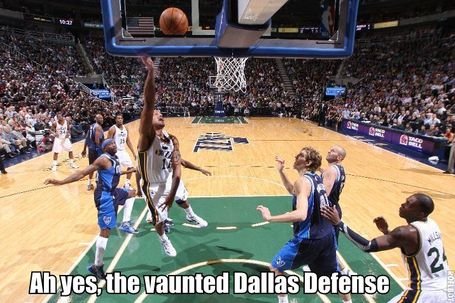 (On the Mavs) "We had a good opportunity to go from a good team to a great team and we let it slip away. Give them credit. They beat us. But at the same time we still had a chance to win. It’s tough."

(On the technical foul and scuffle with Nowitzki) "I saw him smack the ball out of Favors’ hands, so I did the same thing. But I guess, it’s the second one that counts. Maybe next time I’ll be first."

(On if he’s encouraged by the fight shown by the team) "I’m not into moral victories, man. I’m into wins and losses; I don’t care about stats, I don’t care about anything but winning and losing. You couldn’t pay me enough money to be happy to lose, so….

(On if he was trying to set an example for the younger players) "I’m not trying to show anybody anything. I am who I am, and whether it’s good or bad, I’m just going to be myself. My teammates are like my brothers. I love all my teammates, I love my team. It’s like protecting your house, you know. We’ve all gotta be respectful. Be respectful; if not–whatever happens, happens."

(On the crowd) "The crowd was good, the crowd is always good here. I wish we could have sent them home with a win. It would have been big for us, momentum-wise."

(On the Difference between the Jazz and elite teams) "Belief. Belief is strong. Once we start believing we can be as good as we can be, which is great. You don’t get to be second in the West by accident, and you know, when you get it you want to maintain it, when you get it, you want to be first. And once we get that mantra as a team, we’re going to be strong. Belief is stronger than reality."

Dallas second ranked defense continues to hold water. Many (including myself) wondered if this turnover-creating defense the Mavs had would be able to last once the schedule wained. It seems to be holding up quite well, for now. The Jazz shot 38.8 percent and honestly, it could have been worse if not for the points the Mavericks gift-wrapped the Jazz with their second half turnovers. Utah's only consistent offense was on the break and in a half-court, tight fourth quarter game, that means the defense is working. Only four steals tonight for Dallas, which makes the effort even more impressive. The Mavericks rotated well and didn't let any of the Jazz's sub-par wing players do much damage, while Haywood and Ian Mahinmi did damage control on Al Jefferson after Jefferson's efficient first half. Haywood deserves a ton of credit: Jefferson was toying him with a variety of post moves and Haywood clearly adjusted accordingly in the third and fourth quarters. He contested better of Jefferson's outside game while staying down on his ball fakes and spins.

I am super proud of our team. You never want to lose a game. But if this game had 'injury time' like soccer does, you just knew that we would have won it. The Jazz, and the Jazz fans, took everything the Mavs could dish out but the Jazz were never knocked out. What gave the game to Dallas wasn't them just being, inherently, better. They weren't. The Jazz defense held Dirk Nowitzki to 5/12 shooting (12 points); harassed Jason Kidd into 6 turn overs; and held onto the ball well enough so they only got 4 steals in the entire game (the Jazz had 11). Dallas has a very potent three point attack, and against the Jazz they went 5/20 from deep. The Mavs weren't a better team tonight, and they're not a better team if you look at the rankings. They just scored 3 more points than us, and we didn't get a chance to finish our final possession.

Yes, I think Dirk should have been ejected for his second technical when he swipped the ball out of the hands of Derrick Favors or for what he called the ref as he left the floor going to the locker-room at the half.

Gordon Hayward got a dunk with 2:47 left to tie the game. From that moment on the Dallas Mavericks did what the NBA champs do. They turned on the screws they played perfectly. They won. This is the difference of where the Mavericks are and the Jazz. But take a moment to remember never for one moment did we ever believe this team was going to be able to battle NBA champs in that setting.

Brendan bricked NIL of FOUR from the line. So far he is sporting a so-so brickrate above 50%. Celebration for our third best Center, Beaches! [nsfw]

On the other Hand, Utah had 10 more FTAs. ONLY TEN! 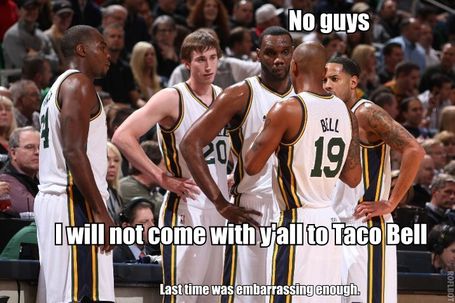 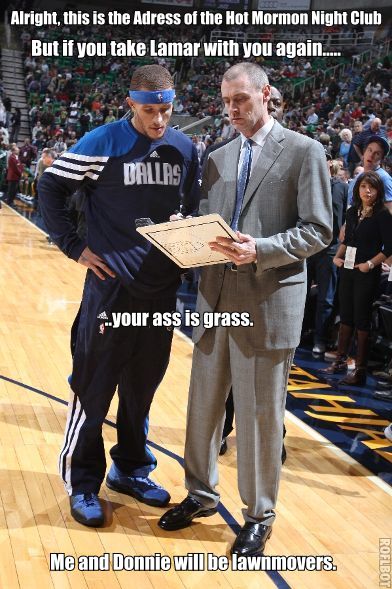 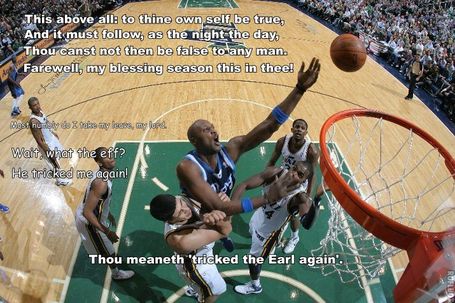