You recognized that the Mavericks have been pretty inconsistent as a team so far? Thought so. Before you complain that I'm stating the obvious here: This doesn't apply to all members of the rotation. In fact, you can divide the ten regular rotation players into two groups with a pretty astonishing effect.

I used the PER-metric in this one and the X-Axis of the image below is the timeline of the season, the Y-Axis shows the fluctuation of the PERs from game to game. "0" means they were right on par with their average PER, "1" means they have been 100% better than their average (effectively doubling their average), and "-1" 100% worse (a PER of 0) and so on. You can hover over the image to see the second, inconsistent set of players. 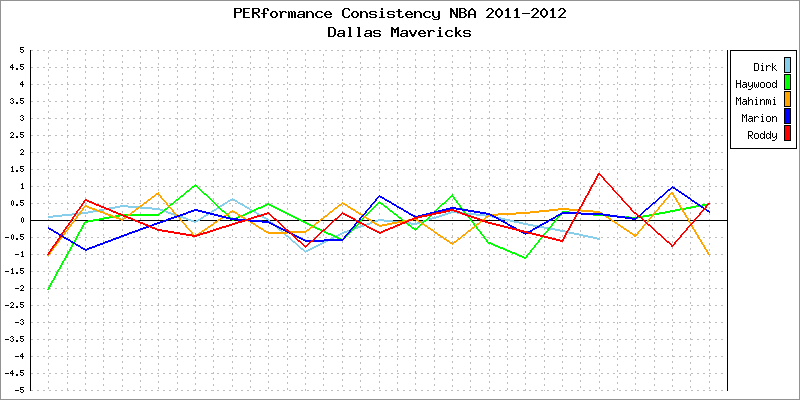 The first group of players (Dirk Nowitzki, Brendan Haywood, Ian Mahinmi, Shawn Marion and Rodrigue Beaubois) more or less don't cross that +/- 100% area. You could even make a point, that in most of the games they are closer to a +/- 50% fluctuation. In other words: You know what you get out of these players night in and night out and can rely on their production. Roddy has been a bit up and down lately, but that's mainly because he rocked that Utah game, which is, outside Haywood's showing against Miami in the opener, the only performance that significantly crosses the +/- 100% area.

Only because this group is consistent doesn't mean they are consistent on a high level, because you can be consistent around a PER of 3, 10, 20, whatever, but these actually have decent PERs all around. It starts with Haywood at 12.66, all the others at around 18 and Dirk tops the list at 19.79.

The other set more or less is within a +/- 150% range and every single one of them had at least one game with a negativ PER (under -1 on that scale). Lamar Odom is not really surprising, he had some decent games lately, but fell off the clip brutally against the Timberwolves. But what about the Jasons and Vince Carter? You could argue that Delonte West absolutely has to be productive night in and night out, because he overtook that role from Stevenson, but it would be nice if the other other guys could be a bit more consistent to say the least.

So inconsistency is an issue, but only for one half of the Mavericks players. Unfortunately, pretty important ones.