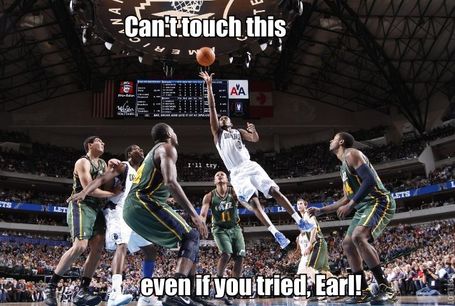 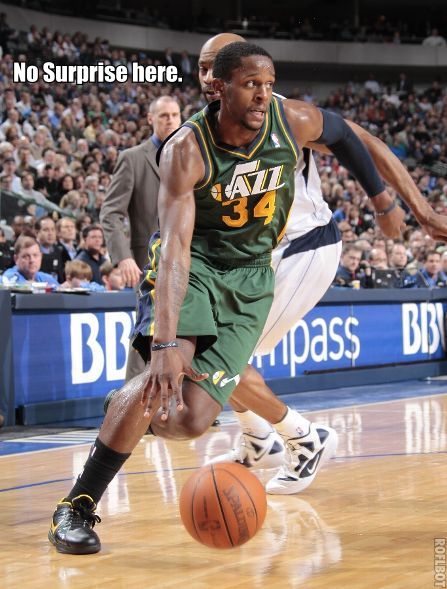 (On the team's performance) "Roddy was very good. I thought everybody on the team played well. Jason Kidd went out early with a calf strain, all of a sudden, a lot of things change for us. Again, you've got a guy like Dominique Jones who is able to come in and finish the game, keep some of theminutes down for some of our veteran guys, that's really key. Odom played his best game of the year. Marion was really consistent and Haywood was aforce inside. Carter tonight came in and gave us a huge lift at the start of the game when Kidd went out. He hit two or three shots immediately and that got the building going and got everybody into it. I really was proud of the way the guys competed because this is a very competitive team."

(On the Mavs stepping up) "You can tear up any rotation sheet that you make up. It’s going to be seat of our pants, everybody’s got to be ready. We trust all our guys and tonight they showed why their trust is earned.’’

(On Lamar Odom) "He's doing what we're asking him to do; just keep playing basketball, keep staying aggressive. I thought his all-aroundgame was tremendous; he defended, he made plays on offense. He made some really high basketball-IQ plays; getting fouled at the three the one time. Not many guys have a feel for doing that when the shot clock is running down. He was terrific, and we needed every single guy, every single guy."

(On Lamar's Game) "This doesn't surprise me. This was coming and he's been very determined. There's been some bad luck along the way, but you've just got to stay at it. Our crowd really likes him. They like him because of what he's done with the Lakers for all of those years. I love him as a guy. It's taken a while for him to get a feel for everything. This is an important night, and now he knows what it's about."

(On Rodrigue Beaubois)"I thought he played the point position as well as he's ever played it, in terms of running the team, making reads. His defense was terrific, and yet he didn't foul. He didn't have any bad fouls. He really had a good feel for where to put everybody on the court. He made plays. He made important plays time and time again."

(On Dirk's Status) "I'd think on Saturday we'll know more for sure where we're at." 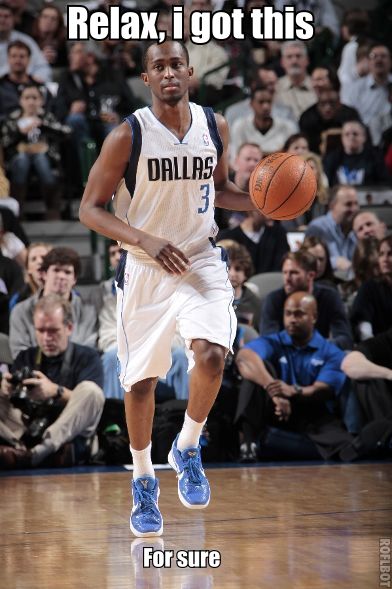 (On his Game) "Tonight was a good night. When they give you a good shot, you've got to be ready to shoot it. I'm just trying to be aggressive."

(On gaining confidence) "Like I said before, because of my summer, every day I planned to work on my game, get better every day, and so that’s it."

(On Kidd's Injury - right calf strain) "Hopefully, he's not that bad. But, if that is the case, me and everybody else have to be ready. If he's out we know how important he is, so we have to be ready to step up and do our best to win games." 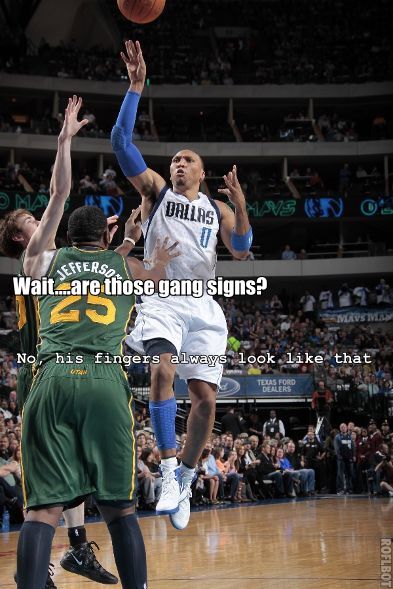 (On the Win) "Good response, good bounce back. We went out there and did what we needed to do, got a good win and everybody contributed. That’s what it’s gonna take."

(On Odom) "He had a great all-around game tonight and that’s what we need."

(On the Spurs next) "It was a good game, but we know one game at a time. San Antonio is our rivalry, so we know it’s gonna be exciting and it’s gonna be pumped up in here." 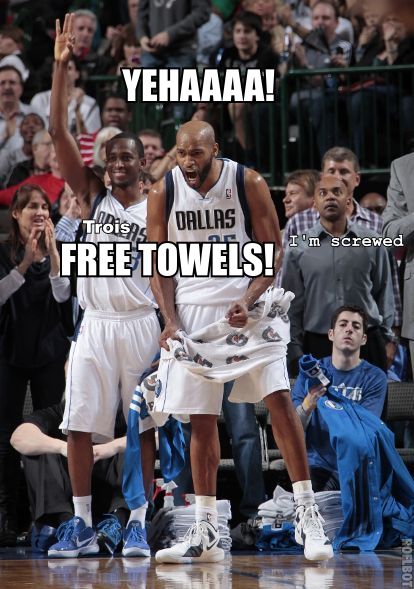 (On his return) "I felt good. I wasn’t expecting to play big, big minutes. But I was ready to go, ready to play and I wasn’t gonna come back if I was gonna hurt the team. J-Kidd goes down, they called me in a little earlier than I expected, but I felt good."

(On his conditioning) "I put a lot of work in just to get back and to make sure my conditioning was at least decent. I felt like a kid in a candy store." 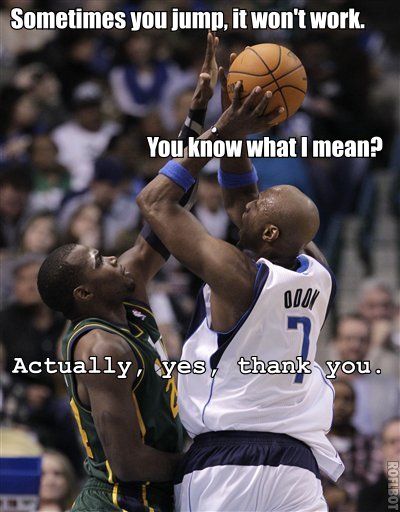 (On making some shots) "It's not all about making shots. It's about making the right play, making stops, making defensive plays. Tonight I played a better all-around game."

(On his body) "I'm used to being in exceptional shape. I'm not there. I'll keep tugging at it. Sometimes it's going to hurt. Sometimes when you get to the hole and you jump, it won't work. You know what I mean? I've just got to take my ups and downs and keep pushing through and get through that threshold."

(It appears you can still play) "Just a little bit. I've got a little left in the tank.I didn’t expect to play bad 66 games in a row. Tonight, the shots went in. I took open shots. It could have happen last game like that, but it just missed. It’s all about winning at the end of the day. That’s all that really matters."

(On if a Weight was lifted for him tonight) "No, I’ve got to carry it over. I already know what I can do. I've got to keep it going, keep it going and make it consistent."

(On Coaches Support) "When your coach let’s you know that he’s got your back, it’s important."

(On being in Dallas) "It feels good. There is a lot of support since I've arrived on this team from all the players and everybody, the city of Dallas. They've made the transition comfortable. I'm proud to be a Maverick." 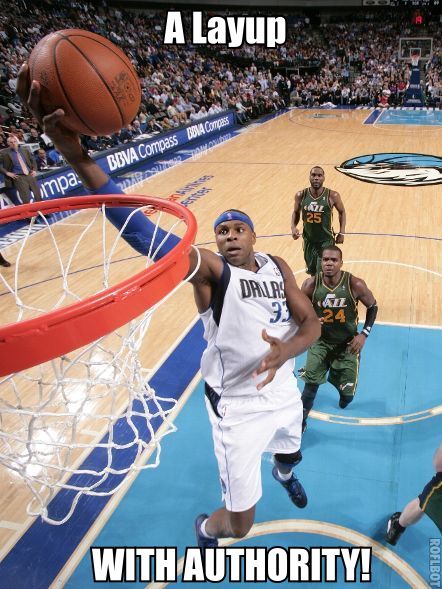 (On the Mavs) "I think as a team, we all played well. I’m especially proud of Roddy Beaubois. With Jason Kidd going out early, it could have got ugly for us. He stepped up and basically led us to this victory. Roddy really likes playing against Utah. We couldn't have won without him."

(On Rebounding and the Spurs) "We had a lot of guys step up tonight and we needed it after that bad loss on Wednesday. Everything was working well and we need that to keep working Sunday against the Spurs." 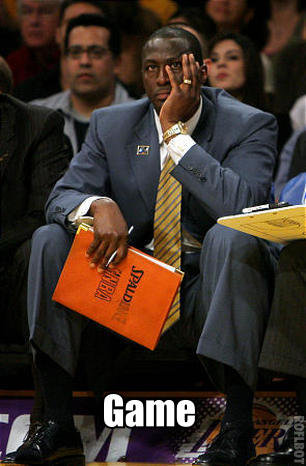 (On the Jazz) "We’re still a 10-7 team. We’re going to fight for everything we get. And that’s the way it’s going to be. We expected that right from the beginning." 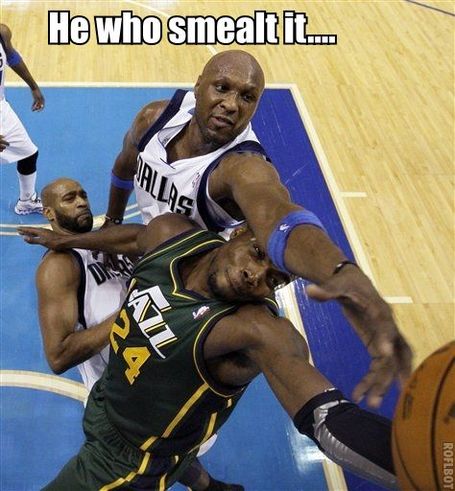 (You've had some tough losses lately; what's you're read on where you guys are at?) - "We're still learn; we're still young. It's going to take a little time for us to get better with our situational stuff, but we'll figure it out."

(You feel like it's the consistency for 48 minutes thing in some of these games?) "Being consistent throughout the whole game, yeah, that's the key for us."

(Do you feel like you guys were fighting an uphill battle the entire game,and that during their 22-5 run you guys kind of ran out of gas?) "No, not at all, we just couldn't get stops. They shot overall 54% from the field, scored over 100 points - 116 points. I mean, our defense just wasn't there." 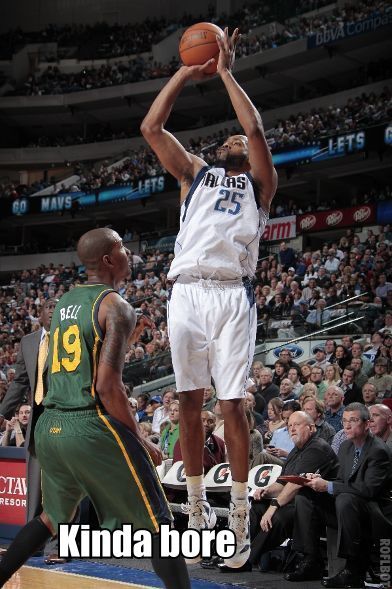 (You guys were hanging around most of the game until they went on that 22-5run in the 4th - did you guys run out of gas at that point?) "I don't know if we ran out of gas. I think we let our guard down a little bit. We mighthave thought we were back in the game for good and kind of relaxed. And they're a good team; they kept plugging away, and they really looked like they turned up the intensity defensively there at the end of the third [quarter] going into the fourth, and caused us some problems offensively."

(Talk about the defensive effort of the team tonight) - "It was pretty bore. I'm reluctant to say that we tried to play D. But. ..you know that kid Bubou is faaaaassssst, he had us in pick'n roll, spread us out, they moved the ball so quick that l it was hard to stay in front of people." 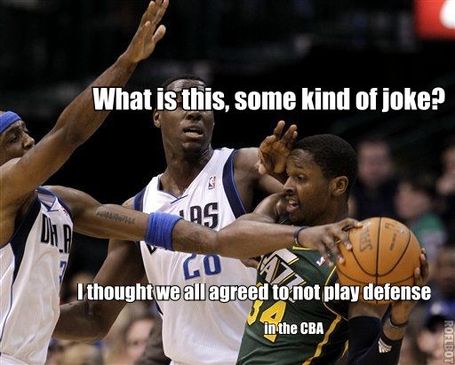 (On the 4th) "We’ve gotten to a point where Millsap and Jefferson are so good that we start to watch them sometimes. And then a couple times when they get going, we ride them for so long, when a defense changes it up, we take ourselves out of rhythm by just standing and watching."

Josh Howard, "which is hilarious"

By 1:15 left in the third, when yet another Jazz player hit another easy shot to actually bring it within two, I was threatening to punch a cat "right in it’s furry (freaking) face" and mentally composing a game recap where I celebrated Roddy’s efforts, pointed out the absences, and tried not to be too down. Like, you know, last game against Minny.

Then something magic happened, other than Yi Jianlain’s miss, foul and kicked ball in the first two minutes of the fourth (seriously, how many photos does Yi have of Carlisle’s family? While guys who do nothing but produce like Wright, previously Roddy, and even Williams, Yi Jianlian has averaged 18 minutes the last two games. He’s hit 8 of 20 shots and been knocked down going for a rebound 37 times).

The magic thing was:

Roddy Beaubois drove to the hoop, causing the defense, keying on that since he’s magic first half, to collapse, then throwing it to Ian for the easy lay-in. Then drawing a foul on the other end. Then making a three.

This was where I started losing it. Josh Howard goes 1-5, 0 assists, 0 rebounds, 0 steals, 0 blocks, 1 turnover. The dude obviously didn't have it tonight. He hasn't had it since coming back from the injury.

Would it have killed Ty to go with CJ at SF and put Burks in—the one guy who could keep up with Beaubois? Especially since Burks has been consistently good defensively?

kinda like Bleacherreport, but maybe they'll churn out a gem later today

Brandon Haywood was a beast inside and more than the Jazz could handle. His inside play on the glass kept possessions alive and gave the Mavs numerous extra chances the Jazz couldn’t afford. Coupled with the penetration of Roddy B and the Jazz were on their heels.

Jason Terry off the double stagger is a great play, one of the best in the NBA

Lamar Odom wishes he could play the Jazz 82 games.

If it hasn’t already been made incredibly apparent: this team, its coach, and its fans all desperately want Odom to play well. His first bucket of the game was met with a roaring applause that bordered on a standing ovation, and Odom somehow ended up as the in-arena "Player of the Game" despite Beaubois’ superior performance. Some of the motivation behind their push for Odom’s success is obvious (the Mavs’ interest in Odom playing well is quite clear, and the fans go as the team goes), but I do think the relationship is a bit more complex than just that. Odom is a guy that makes people want to root for him, and I think anyone would be crazy to not factor that into our understanding of the glowing support he received from the American Airlines Center on Friday.

in a Game of Inside (and Threes), nobody missed as much Shots at the Rim than Yi and Vince with 2 apiece Nobody. On both Teams. NOBODY!

Brendan bricked two of Six from the line. So far he is sporting a declining brickrate of 52%. Celebration for our third best Center, Beaches! [nsfw]

On the other Hand, Utah had 10 more FTAs. ONLY TEN! 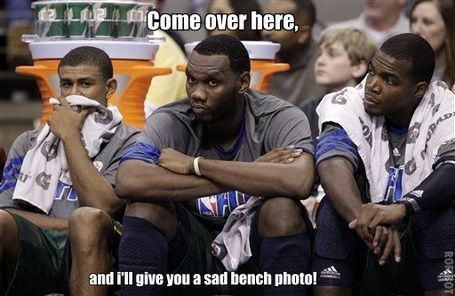 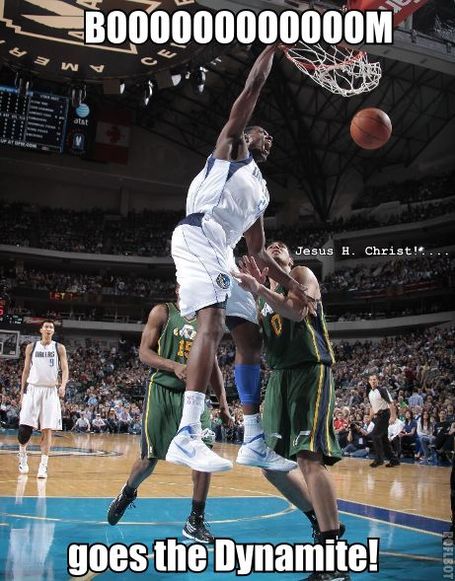