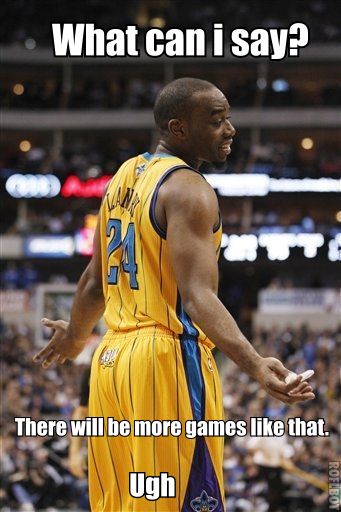 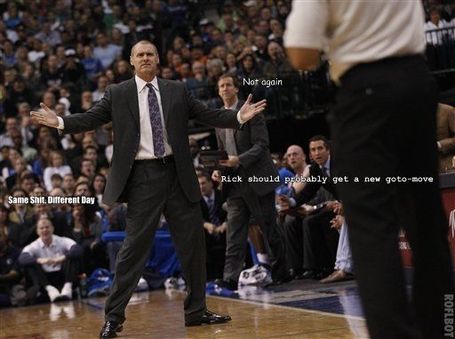 (On the Game) "I think the starters got us off to a solid beginning and that was important, but finishing the game is key. You’ve got to get the win. We were able to do that. It is not always pretty, but there’s gradual, mild progress and we’ve just got to keep working."

(On the Season) "The defining characteristic of the season is that depth is huge, depth is king. Energy trumps everything. We have to find it, we have to keep it on the floor and when it is not there we have to shuffle the deck. That is the way that it has to be."

(On the Energy in this Game) "For the most part, I thought we were pretty energetic. We had some guys who got tired and we got them out."

(On West) "I liked his tenacity. He made plays. He’s really into the game. That was the question tonight, who was going to finish at point? We need defense in the game, and we need that kind of intensity and he made big plays down the stretch."

(On Dirk's shots) "I hope he keeps getting those looks. He's going to get there."

(On Beaubois) "He made some shots, but the rest of his game needs work. He’s playing point now and Jason’s not out there with them, so this is a different kind of challenge for him. His decision-making is going to get better, his recognition is going to get better, but he understands the challenges and it can’t be me having to scream at him to get in a stance every time on defense. He’s got to do it for us."

(On Mahinmi, leading scorer) "Ian's a good example of what's important this year. He's energetic and involved in every play. He’s extremely valuable for us." 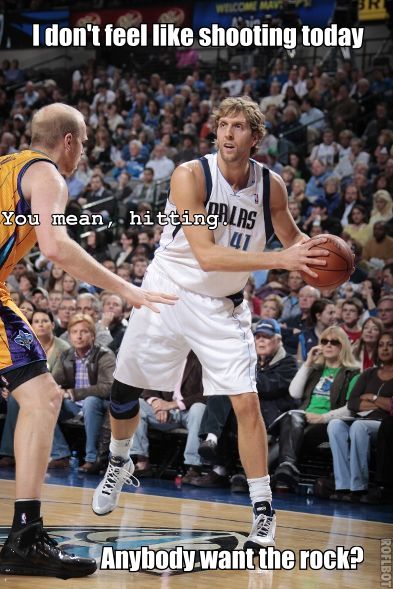 (On the Win) "When you’re struggling like we are to win games, that’s the only thing you can take out of this is a win and just kind of move forward. But it obviously wasn’t pretty at both ends of the floor."

(On the Offense sans Kidd) "It was awful. There wasn’t much going on, but we found some plays. There were some positives out there."

(On Beaubois) "He’s got to work on his decision-making, I think we all know that, coming off pick-and-rolls, making the right plays, seeing the floor that’s sometimes problems for him. But I like when he plays hard, he makes stuff happen, and I like when he’s aggressive. Sometimes he has to find a better mix of driving and shooting and finding the open guy, but we need him. He basically sat out for a year and a half. He’s just like everybody else. He’s got to get his wind back. He’ll be OK."

(On his knee sleeve) "I’m all right. Just gotta keep on working." 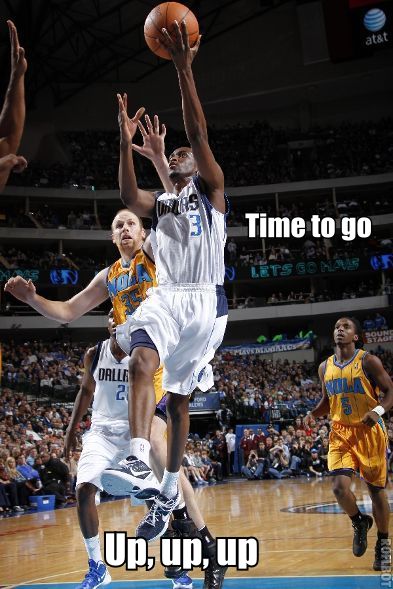 (On his struggles) "I still need to keep pushing myself, to keep working because I have to find my sensation back. All those layups, normally I make those. Now I take it like it is important for me to have minutes to get my rhythm back and help the team to win because right now I am still working to get my game back." 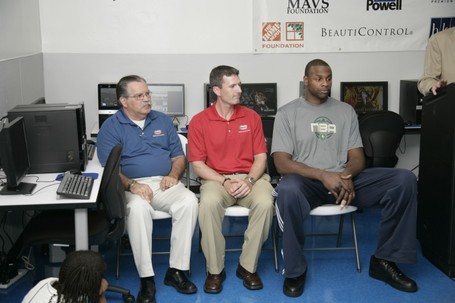 (On Vince Carter still able to dunk) "He surprised everybody with that. We need that excitement. Vince’s still got a little spring in those legs. If he gets that step on you, he can still get up." 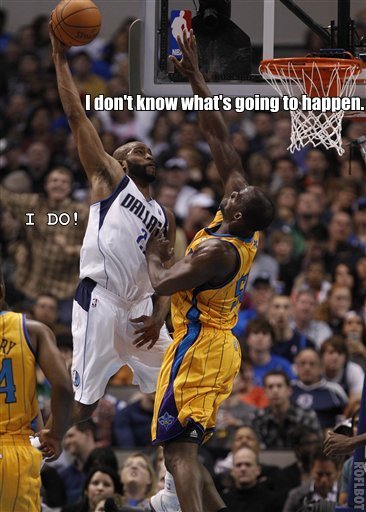 (On the Mavs) "Everybody’s unselfish. It’s not about how many points you score, it’s about execution. I think for this team that’s the most important thing. It’s about execution. We have to outsmart some teams. There’s going to be some younger teams that are maybe more athletic, faster than us, but we have to pride ourselves on execution and being smarter than everybody. And I think us moving the ball and finally getting stops makes us a successful team."

(On Okafor-posters) "If I go up soft, he’s going to block it. I’ve had many experiences with him doing that. I saw him coming, I saw him waiting, I saw him getting ready to jump, I’ve got to attack him. I didn’t know what was going to happen after that."

(On Dunking) "I’m not going to sit here and say it’s not fun. It’s just I don’t make it my business to go out and do it anymore." 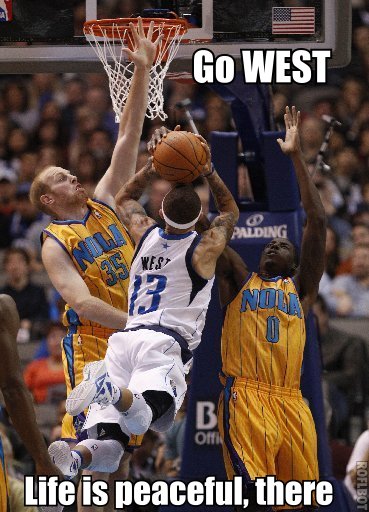 (Shame, isn't it?) "I’ve been there 100 times in my lifetime. I live right around the corner. I live in D.C. It’s going to be ashamed the President isn’t going to get a chance to meet me. I’m the president of my house.’’

(How you like Reporters not giving a flying **** about the Game?) " Deleted" 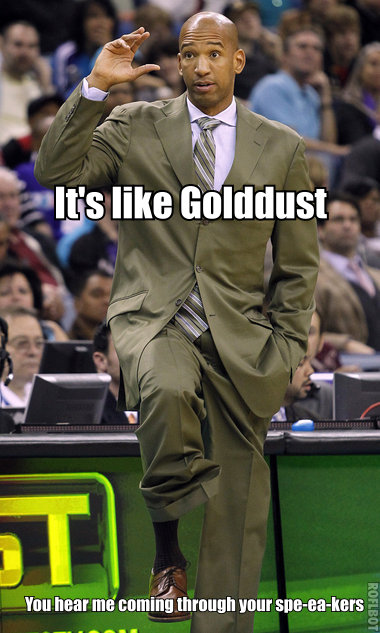 (On the Hornets) "We’re still working on establishing an identity, and I don’t think we’re close. But I think we’re working toward it. It takes time to build that foundation. Like I said, we have so many new guys, and that falls on my shoulders. I’ve got to get guys in position to win games. Guys are trying their best. Not many teams are going to have an identity for the first 20 games. It takes a while when you haven’t had a training camp.’’ 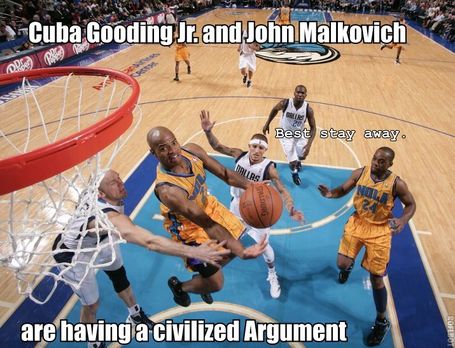 (On injuries, losingstreak) "It's difficult. It's part of the season, part of the grind. Guys have injuries, personal problems, to deal with. We just came up short. Getting healthy is part of it. We need to get back our nucleus and get back on track. I'm not going to make excuses. We've got to learn as we go."

It was one of the greatest team efforts I’ve ever seen, as the Mavs scored that 96 with nobody hitting over 15. Carter had 13, Mahimni had 13, West and Terry had 12, Roddy had 11, Dirk had 10 and Lamar had 9. You want depth? This was some Captain Nemo stuff.

Hornets Sixth Man of the Game: Carldell "Squeaky" Johnson had yet to score an official basket entering Saturday, with his lone point coming off a free throw, but showed much more of his offensive skills against the Mavericks. Johnson went 3-for-4 from the three-point arc, accounting for all of his nine points in 17 minutes.

The Hornets primary defensive principle is to go under screens and pack the paint. Tonight, that burned them as Dallas shot 42% from three.

I find the celebrations of Corpse Vince Carter even more irritating than those of Arrogant but Good Vince Carter. Go Figure.

Ian Mahinmi (13 points, 5-6 FG, seven rebounds, two steals) is making it far too easy for Carlisle to leave Brendan Haywood (two points, six rebounds, one steal) on the bench. Defensively, Mahinmi has been solid, though admittedly imperfect. On offense, he’s done a tremendous job of finding spots on the floor with both open passing lanes and easy scoring opportunities. I don’t think we’re at all near a point where Mahinmi would supplant Haywood as a starter (such a move would be ill-advised for motivational reasons alone), but the games in which Mahinmi logs more playing time than his counterpart are becoming more and more common — and rightfully so.

Beaubois scored 11 points in 17 minutes…and also shot 10 times in 17 minutes. I don’t want to take away too much from a solid performance from a player who has always had a bit of a volume scorer streak, but Beaubois started to force some things once he felt his hand getting hot. Being aggressive is one thing, and pulling up off the dribble for contested threes is another.

Haywood bricked none of nil from the line. So far he is sporting a still solid brickrate above 50%. Celebration for our third best Center, Beaches! [nsfw]

On the other Hand, Yawn missed five FTs. Merde.

Outrebounded? Sure, 35-39, as both teams stayed in the low 40s percentagewise 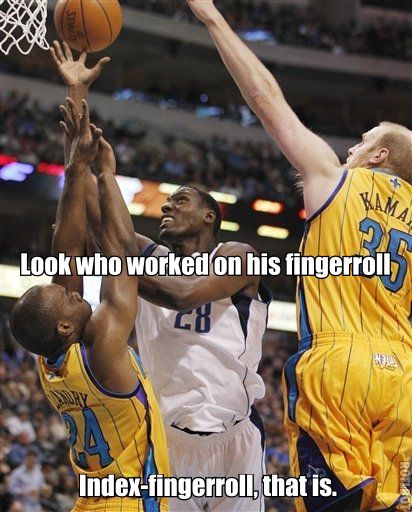