Mavericks Struggle To Adjust To Strange Season And Schedule, But So Do Others

Share All sharing options for: Mavericks Struggle To Adjust To Strange Season And Schedule, But So Do Others

Four of the five losses of the Mavericks haven't been close. And they weren't pretty, too. The only game they've lost while looking half-decent on the court was the 102-104 at the Oklahoma City Thunder. Outside of that competitive game, they've lost two "preseason" games to start the season and two more, in which they right from the start didn't look too interested at all. In those two games at the Timberwolves and at San Antonio they posted the worst Offensive Efficiencies (Points Scored per 100 Possessions) of all games so far: 79.59 and 87.96. Both games came within a really hard stretch, 6 games in 8 nights, and there are more to come. But the Mavs are not the only team that mystically plays great one night and looks totally worn out the other. The Bulls beating the Magic on Friday and then getting blown out by the Hawks yesterday is only one example. It seems like the schedule is already taking its toll on every team. I've compared the Daily Efficiency Average for all teams that played that day and came up with this chart: 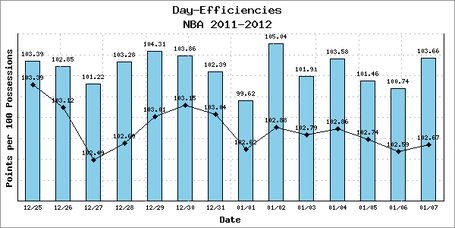 The bars show the Efficiency Average for that day and the line the League Average up to that day. You see that the NBA started off with 103.39 Points per 100 Possessions, then got into a "Christmas regression", regathered, but beginning with New Year's Eve the average slowly dropped to todays value of 102.67. That's a minus of 0.72 pp100 in a two-week span. If you're wondering why 0.72 Points per 100 Possessions on average is kind of a big deal then you'll have a point, because it's essentially only 1% of the overall production: 1% fewer makes for Kobe 'Breaking: Shooting Guards Do Shoot' Bryant, 1% fewer lobs in Lob City and 1% more turnovers for Russell Westbrook. But with averages, also slight shifts are rather large. If that trend continues, the league will end up with an Efficiency Average of 97.09. Last year the league finished with 107.20. Is 10 points per 100 Possessions worth you attention?

OK, it won't become so ugly, but the fact that the league is down in Efficiencies and already regressing is not a good sign for the season at all. After the jump we'll discuss an explanation for this development.

I got the idea for the research from Bryan Gutierrez, who mentioned that it seems like the team that shows aggression at first tends to control (and win) the game. If that's the case, it should result in very few comeback wins when the opponent is leading early. Here's the data:

First of all: The EffDiff+ is the Efficiency Differential for the leading team after the 1st Quarter or Halftime. Because it is not very common to say "oh, we're leading Dallas by 12.61 Points per 100 Possessions" (although the more accurate statement), I've listed the corresponding average lead based on the current League Pace of 92.09 Possessions per Game. So outplaying the opponent by 10-15 pp100 normally translates into a 3.45 to 4.6 point lead after the first Quarter and 4.6 to 6.91 point lead at the half.

What we're seeing here is pretty impressive in my eyes. Home teams that have to fend off an early deficit come back at a reasonable rate overall, but also struggle when the lead is at least 10 pp100 at the half. In that case the road team has won 30 out of 38 games. But when the home team has caught the early lead, it virtually couldn't lose. Count out tiny advantages below 5 pp100 and those teams are 48-8 when leading after the first quarter and 53-5 when leading at the half. And that's not limited to big leads. Home teams have won contests 25 out of 28 times (1st Quarter) and 38 out of 42 times (Half) when leading by 5-30 pp100. With a double-digit deficit at halftime (EffDiff 20+), road teams are winless (0-27). And we're mostly talking reasonable margins: Even for a road team it should be possible to dig out of a 5 point hole after one quarter or a 9 point hole at the half, yet is hasn't happened very often, if at all. So could teams just give up on games sooner than normally because of the condensed schedule and fatigue?

You have to be careful: The team that leads after one quarter or at the half most of the time is also the better team and therefore will win the game for other reasons than lack of effort by the opponent, but the numbers nonetheless could indicate that especially road teams are unable or unwilling to dig out of early deficits. They probably had a game the night before or will have a game the next day or even both, are in the midst of a 6-in-8 or 7-in-9 or whatever and could lose interest if the game tomorrow might be easier to win.
The Mavericks jumped out to early leads in all three wins so far and

Of course no athlete would ever admit that, but it could very well be the case that those things unconsciously affect the effort on the court.