NBA Season Is The Tale Of Two Halves For Dallas Mavericks, Dirk Nowitzki

Share All sharing options for: NBA Season Is The Tale Of Two Halves For Dallas Mavericks, Dirk Nowitzki 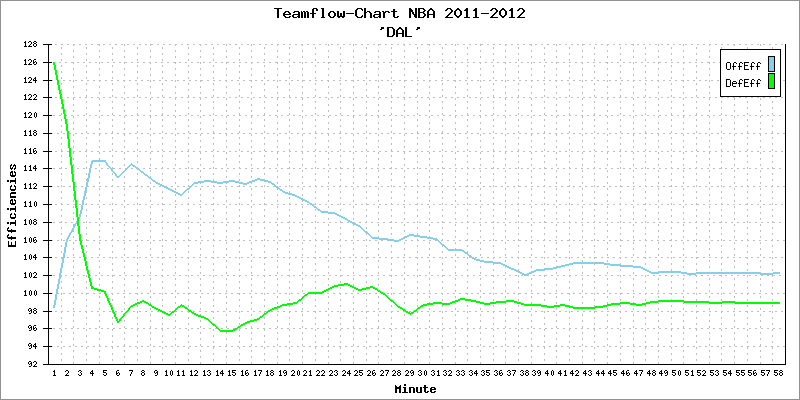 The game last night against the Clippers was a perfect example of how a game these days normally looks like for the Dallas Mavericks. They came out strong and finished the first half with an Offensive Efficiency of 122.65 on 57.89% shooting. After the break, the magic was gone and Dirk & Co. scored 85.08 Points per 100 on 31.71% from there on.

This pattern has established throughout the season. In the last 12 games, Dallas was able to score over 100 Points per 100 Possessions in the first half every single time, but could only reach this mark in the second half three times. The chart on the right shows the Efficiency Development over the course of a game for the Mavs and it illustrates that the defense remains more or less stable throughout, but the offense takes a significant hit around halftime. Dirk, Rick Carlisle and others repeatedly said that 3rd quarter energy has been a problem along the way and the numbers certainly agree.

The most common explanation for this issue is fatigue. In the condensed schedule the Mavs start out hot in games, but their old legs only allow them to grind out games in the second period. What supports this conclusion is the fact, that the Mavs 3-point attempts go up as well, attempting 21.88 per 100 in the first, but 24.02 per 100 in the second half. If your offensive flow disappears, you'll be forced into more long-range shots. After the jump you'll see which players are most affected by the 2nd half drop-off so far.

The table shows the change in production in the second half compared to the first.

First of all, it's a good sign that nearly every player can raise his production in Points in the Paint, which in my metric combines all points in the paint and points off free throws. So when shots aren't falling in the second half, most players make up for it by driving to the basket or earning trips to the line. There's only one real exclusion: Dirk Nowitzki. His percentages drop, he alongside Terry, Odom and West takes notably more threes and he doesn't take it to the rim as much. Combine these facts and you have the blueprint of how fatigue will affect your game.

In terms of point guards, both Kidd and Delonte have significant drop-offs in relevant categories for their position: Assists and Turnovers. It's not really a good sign when your two points stop assisting and start turning the ball over more frequently in the second half. They actually lead the team in change of TOV P100 and AST_TOV (ratio).

The one player that is more resistant to second half drop-off seems to be Jason Terry, but you have to factor in that he has put together countless strings of first half no-shows while exploding in the fourth, so I don't really know if you can really credit him for that. The overall perception focuses on late-game heroics, but in many games Terry is hurting the team more through three quarters than he does help in the fourth. So I would give that mini-award to Shawn Marion here.

Mavs fans might have to get used to poor second half outings by the Mavericks due to the condensed schedule and fatigue, but the good news is that they are sitting on the fourth seed right now in the West despite struggling mightily after the break. And there certainly will be opponents that will allow Rick Carlisle to use players like Rodrigue Beaubois to decrease the load of the veterans every once in a while. Also Odom has played better as of late, which is a good sign in terms of Dirk's overall minutes.