Mavericks Schedule Takes Its Toll On Some Veterans

Share All sharing options for: Mavericks Schedule Takes Its Toll On Some Veterans 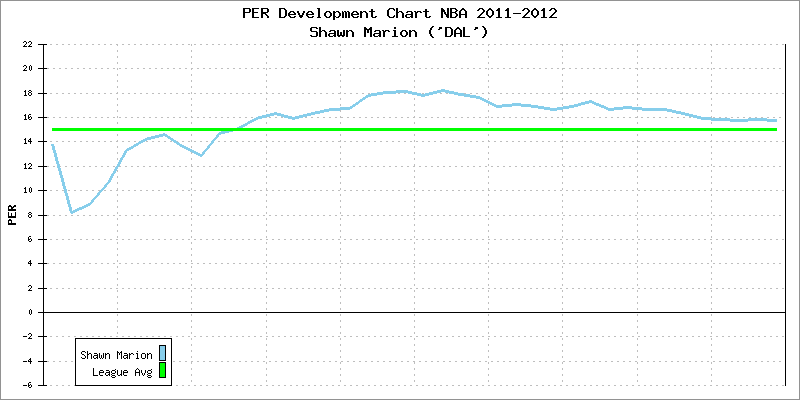 The Dallas Mavericks are currently fighting through nine games in twelve nights and start their only back-to-back-to-back tonight in Arizona against the Phoenix Suns. This brutal stretch presents a good opportunity to look at two of the Maverick veterans, which clearly started to regress lately. I'm talking Vince Carter (35) and Shawn Marion (33), both not finding their rhythm and legs especially after the All-Star Break. The charts on the right show their PER development over time (per minute production metric by John Hollinger). After a horrible start to the season due to not being ready or finding the role on a new team, both players peaked approximately 20 games into the season, but started to regress slowly but steadily and lost two points of production in that metric since then. Another player showing signs of fatigue is Jason Terry, although on a much lower level. 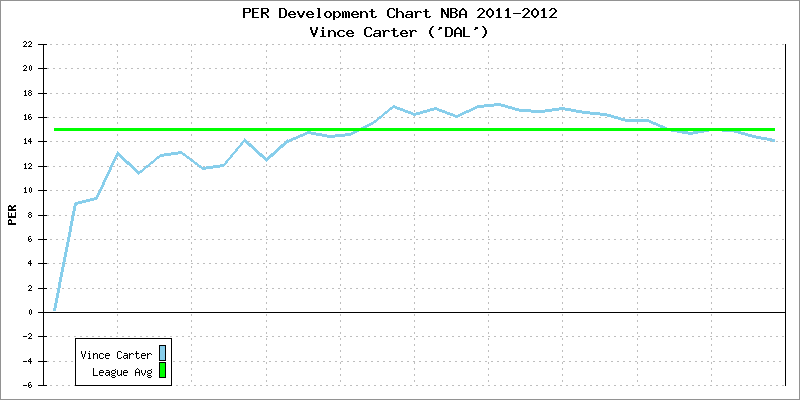 Anyway, besides the fact that the schedule won't do the Mavs any favors, because they have the toughest considering opponents strength and structure, the injury of Delonte West has certainly something to do with it as well. Since Delonte got injured on February, 15th, Marion's (+2.73) and Vince's (+2.75) minutes have gone up on a per game basis. Actually Marion playes the most minutes since that point, averaging 32.56 per game. Dirk and Terry's playing times have remained stable throughout, to give you an opposite example.

The Mavs faced the same kind of problem last season when Caron Butler went down with the knee injury. DeShawn Stevenson added backup duties at the small forward spot in bench unit to basically being only a role player in the starting unit. His reliable three-point stroke disappeared because of the heavier workload. That lasted until Peja Stojakovic, to quote Rick Carlisle, "saved our season."

Delonte West in some ways took over DeShawn's role this year, but with his injury Carter was injected into to the starting unit, picked up more minutes. And also Marion had to play more because they need a reliable defender on the court. West can also provide that, based on matchups. With Delonte and given that Rodrigue Beaubois remains an option going forward, the Mavericks are able to use West in the starting lineup and move Carter back to their backup small forward, relieving Marion of heavy minutes without giving up too much on defense (Roddy does exceptionally well against taller guys as well).

Of course a committed Lamar Odom also helps Marion's case, because Shawn wouldn't have to pick up any minutes as a backup of Dirk. Odom is a good defender as well, so theoretically no issues there. For both Shawn and Carter it is overly important that West can pick up where he has left off, because the Mavs strength is again their depth, not their young legs.

Rob Mahoney also shared his knowledge on Marion in that regard today, be sure to visit.