Share All sharing options for: Without Kidd, Nowitzki's Touches Decrease

After last nights loss to the Portland Trail Blazers Dirk Nowitzki complained about being ignored after starting hot:

(On starting hot and then getting very few shots later) "It's always like I start off hot, I get out of the game at 6 minutes, whatever, first quarter. Then I didn't get a shot, basically one shot in the second and one in the third. And then we're down 8 and then it's like, 'Here you go, now you've got the ball, make something happen.' It's tough. I've got to be able to keep myself in rhythm and keep getting touches throughout the game."

Actually he went 4-for-4 in the first (1 FTA), 1-for-1 in the second, 1-for-4 in the third and 2-for-4 in the fourth (1 FTA). So the "one in the third" is not quite correct, should be "made one in the third", but nonetheless the topic of Dirk getting touches is a sensitive one also among fans, which tend to believe that no one except Jason Kidd can deliver the ball to the German, especially in crucial situations. 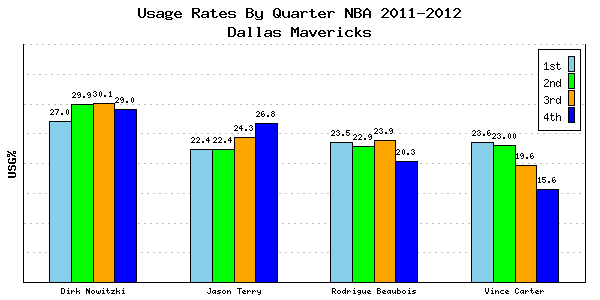 On the right you can see a chart showing the usage rates of the four players with the highest USG% on the Dallas Mavericks, divided by quarters. The overall claim of Dirk seems inaccurate at first. Actually he gets the fewest touches early, the most in the 2nd/3rd and a bit fewer in the fourth (due to Jason Terry). Terry's touches unsurprisingly peek in "his" quarter, Rodrigue Beaubois remains stable throughout three quarters and steps away for Dirk and Terry late, while Vince Carter is a non-factor in the second half. So this is no evidence for Dirk's claims to get not enough touches throughout the game. In every quarter he owns the highest usage rate and he actually gets the least touches early. But we assume that his touches with Kidd on the floor should be higher than with anyone else and that the current injury to Jason Kidd also limits his effectiveness. We'll take a look into that case after the jump. 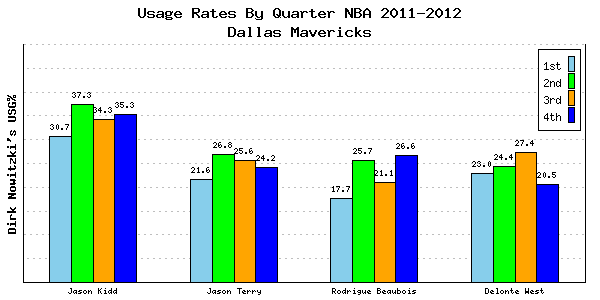 Here you can see Dirk's USG% with the four guards that are running the show on the floor. Please note that Terry's, Roddy's and West's stats are from lineups without Kidd to get a better look how they are able to get Dirk involved without the maestro.
It's not surprising that Dirk gets the most touches with Kidd on the floor. He is the best Maverick to get the ball to Dirk and he is also the only one of the four guards who is absolutely unable to create his own shot, which leads to relying on Dirk even more. It should be noted that, following the normal substitution pattern, Terry and Roddy don't play that much with Dirk in the first and third quarter, under two minutes on average. Nonetheless Dirk has his lowest usage rates with Roddy in the first and third, which is explainable because most likely Roddy checks in at the three minute mark and Dirk follows a couple of possessions later. The Mavs want Roddy to be aggressive right from the start, so fewer touches for Dirk. He is more involved with Terry and West in limited minutes together in these quarters.

In the second and fourth he gets considerably more time with all these guards, about four or five minutes with each one (and without Kidd). Surprisingly West seems to be the one having the most difficulties to get Dirk involved. All are far away from Kidd's ability, but while Dirk's usage rate peaks in the second with Terry and in the fourth with Roddy, West's presence on the court in these quarters limit Dirk's touches the most. Especially 20.5% for 4th quarters with West is too low closing out games. Terry's number in the fourth is also worse than Roddy's, but we know the JET likes to get his own share in that quarter, which is totally cool.

Overall you have to say though that Dirk's inquiry is well reasoned. He gets fewer touches without Jason Kidd and his shooting percentages go south as well. The only exception is West, who unfortunately seems to be unable to get the ball to Dirk late in the game (comparatively). Actually Terry's USG% is 33.3% in the fourth with West on the floor, which is a bit awkward.

Anyhow, the Mavs want to have Kidd back rather sooner than later to maximize the damage of their most dangerous weapon.