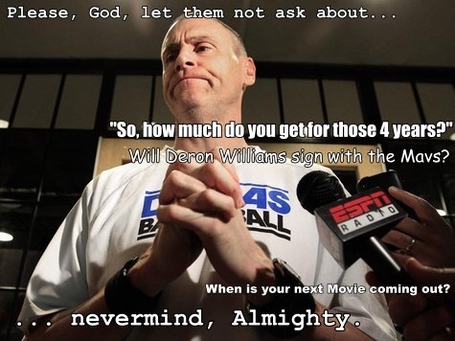 The Dallas Mavericks announced today they have signed Head Coach Rick Carlisle for four more Years. Per team policy, terms of the deal were not disclosed just yet. Technically, it's a contract extension, because his current deal was set to expire by July, 1st.

(Cue Cuban, Mark) "We are excited that Rick will be back with the Mavericks for at least the next four years. He is a proven winner, a great teacher and a coach that will help the Mavericks improve as a team and as an organization."

After two 1st Round blanks and a 2nd Roundcall gone Wright, Carlisle last season finally got the Mavericks over the Trading of Hump and became the 11th Man to win an NBA Championship both as a Player and a Coach.

Rick Carlisle is scheduled to talk about his new Contract, the Mavs, French Fries and, among other things, how to shanghai NBA Players from 4:30 - 5:00 pm on GAC at 103.3 FM Espn.

In Order to disguise the Timing Factor in the Race for Deron and not to question if the Contract was done already before, just not announced publically and what Cuban's hard stance on "not doing extensions during running contracts for People not named Dirk" tripped on, here's a poll.