SBNation's 3v3 Competition, Not Over Yet

Share All sharing options for: SBNation's 3v3 Competition, Not Over Yet

SBNation is running a three-on-three tournament that's actually pretty genius. Here's a link to the actual happenings. If that's too much work, a rundown of the rules is here.

A panel of experts from around SB Nation will be asked to predict how many times each team would win out of 20 meetings between the two teams. Five experts will be assigned to each matchup. Each team's total number of victories will be calculated from the predictions, yielding a percentage likelihood that the team would win a single meeting.

Armed with those percentages and percentile dice (finally joining the worlds of Dungeons and Dragons and sports blogs -- nerds unit!) we'll roll the dice to see who wins, introducing a random element into the proceedings. So even if a team is a 20 to 1 underdog, they still have a 5 percent chance of winning. We'll play best two out of three. Upsets will definitely happen in individual games, and some underdogs will advance as well, just as we would expect in anything as unpredictable as a game of 3 on 3 where one player could get hot and carry his team to victory over a heavy favorite.

Make sense? In short, a panel of five will decides the odds for each team, but the actual winner is determined by a random roll of the die.

Now, what about the Mavericks? 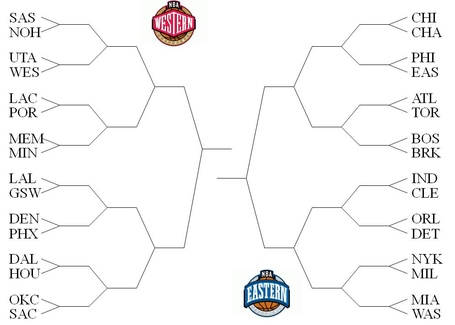 Dallas and Houston will be talked about and simulated on Wednesday. The Rockets have a fun team, combining Jeremy Lin, Jeremy Lamb, Donatas Motiejunas, but I think the Mavericks should roll. The only issue here is having to put Brand or Dirk on one of the guards, but the offensive size differentials should make up for it.

There will be an update on Wednesday when they actually do play. I've never been so excited for a hypothetical, simulated tournament in my life.