Jose Calderon! You know what the worst thing about Jose Calderon is? When Jose Calderon doesn't play. And that's not nothing. We assume he'd play if these games were important, but for a guy who has played less than 70 games a season every season but the last, where he played 73, since 2008, there's just going to be some games where someone else is driving the offense.

That might be a problem, since the backup PG, Devin Harris, is also out (unless he's the backup 2, which is likely enough), the first-round draft pick PG, Shane Larkin, is also out and will be a rookie PG when he gets out there, Gal Mekel is a rookie and so on and so forth. As Kirk never tires of reminding everybody, hiring an older guy with injury troubles for up to 4 seasons is a risk you have to have a backup plan for, and the problem isn't Calderon so much as it is the lack of a backup plan.

Okay. That's all the negative things I'm going to say about the guy because I love the pickup. Love it. It reminds me of another guy who had wandered into basketball purgatory (also in Canada, for a while), who turned around to be one of the greatest moves the Mavericks had ever made, Shawn "Matrix" Marion. When Jose plays, this is going to be a different team.

I want to show you guys something:

Player A is Jose Calderon. Player B is Chris Paul. Obviously, Jose Calderon isn't Chris Paul. But if you're talking about some of the key point guard measurements, assist to turnover ratio, assist percentage, they're about the only players who are within spitting distance of each other. In 2012-2013, the next highest Ast/TO was Jason Kidd at 3.28, nearly a whole point lower. In 2011-2012, Calderon actually led Paul, 4.5 to 4.38 and the next highest guy, Mike Conley, was more than a whole point lower, at 3.23.

I know assist/to isn't everything, but while I'm here, trivia question, how many years in a row has Jose Calderon been in top 3 in the league?

How many years in that span has Calderon led the league? 3.

How many numbers over 4 have there been? 14. And how many of those, if you don't mind my asking, came from Jose Calderon? 6, you say? That seems like a lot.

If Kevin Youkilis was the Greek God of Walks, Calderon is the Don of Controlling the Ball. I've heard lots of people downplay this, but if everybody could do this, everyone would do this. The Mavs, given team speed, get scored on an appalling amount of the time when they turn it over. This is big.

Let's do another one:

Player A is Steph Curry. Player B is Jose Calderon.

I am in no way saying our new PG is a mix of Chris Paul and Steph Curry.

But he takes care of the ball and he shoots the lights out. As well as the best in the game at either, if, generally, under less defensive pressure.

A lot has been made of the fact that he's a defensive liability, something that will be even worse because of who he'll be paired with. But for some reason there are just some guys who, you know, their weaknesses get a lot of play and for whatever reason Calderon is one of those guys. Forget about it. There are things that Jose Calderon does better than basically anybody on the planet, and the Mavs need those things.

More than that, it may be true as critics say that Calderon isn't the best pickup for this year. Without a big, defensive PG behind him, or a lot of options for switching with the 2 guard, it will be possible to exploit his weakness. But as of now, he's here for a while and he's certainly someone the Mavericks can build around. And he's 2 years younger than Kidd was, when he came to Dallas. 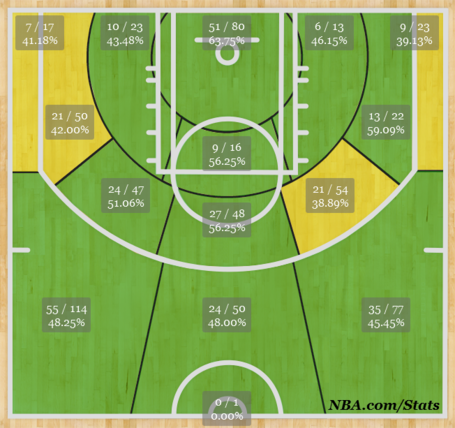