A new season brings yet another completely retooled roster. On paper the new squad should be better than the inconsistent one that took the court last year. The question is, will it be?

1. What significant moves were made during the off-season?

For the second year in a row, the Dallas Mavericks have completely changed the complexion of their roster. Last season's starting backcourt (well, for most of the season) of Darren Collison and O.J. Mayo, who were brought to Dallas to usher in youth and speed, are no longer with the team. Collison, who was in the final year of his rookie contract, is now a member of the Los Angeles Clippers, once again backing up Chris Paul. Mayo, who did not pick up his player option with the team, is now on the Milwaukee Bucks. Both were much maligned last year and their departures were all but inevitable once free agency began. 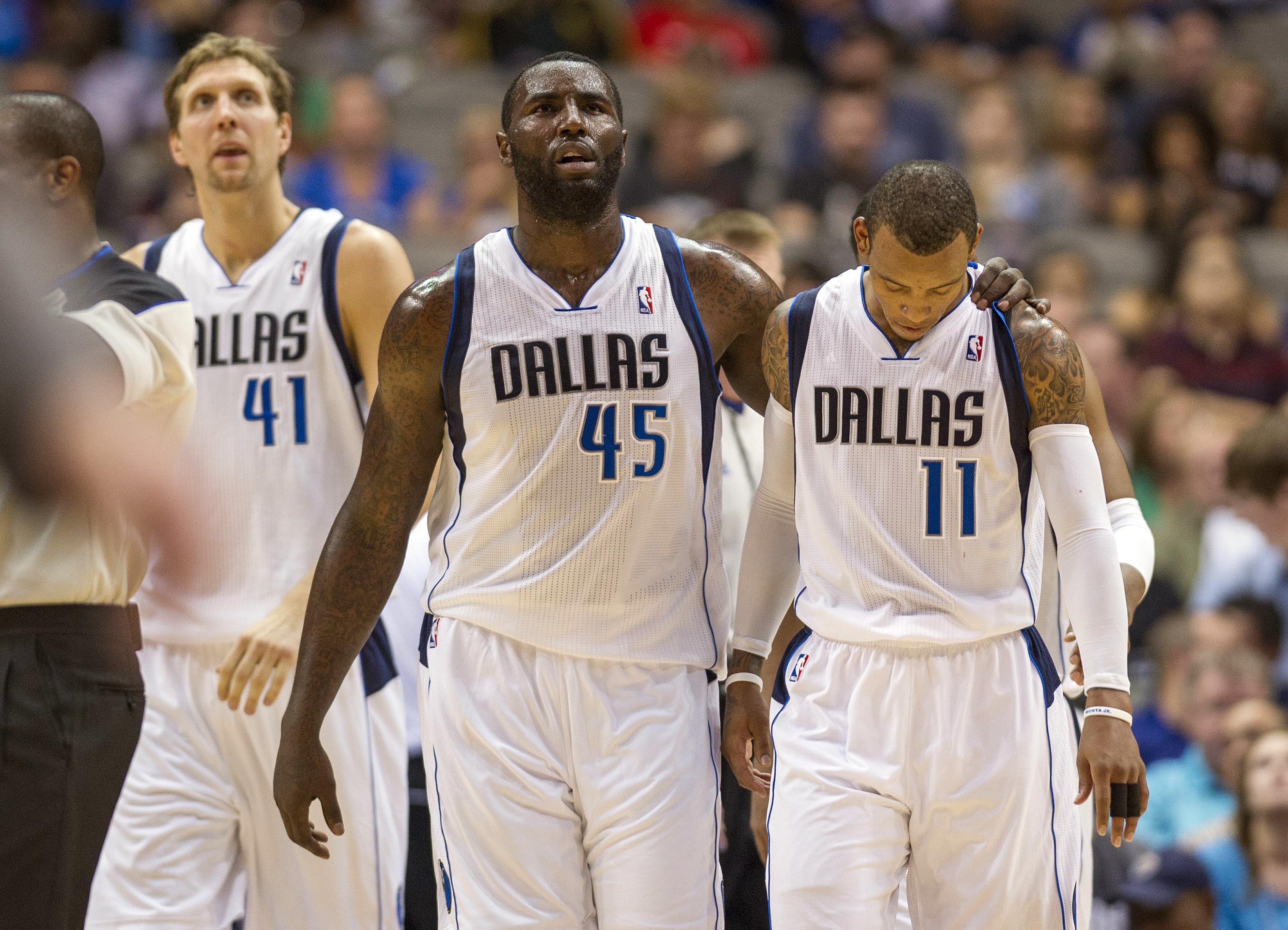 ZILLER: Testing Dirk's patience
GARRISON: Marion still does it all defensively
TJARKS: Ellis gets a clean slate
ROSTER: Does Dirk have enough help?

Dallas also lost two members of their backcourt: Chris Kaman and Elton Brand. Kaman began last season as the starting center on the team but fell out of favor as the season progressed. Brand played solid, effective minutes as the lone post player willing to scrap in the paint. On top of these departures, the Mavericks also let a bevy of players walk. Rodrigue Beaubois, Mike James, Dominique Jones, Anthony Morrow, and Josh Akognon all left the organization over the summer. And good riddance. This was now a gutted team.

Letting these players walk was part of the plan, though. The Mavs were after marquee players, namely Dwight Howard, in free agency and needed to free up cap space in order to cast a max contract out in the water. However, the bobber never moved and the water remained placid.

Donnie Nelson, the team's then general manager, had his work cut out for him with only Vince Carter, Jae Crowder, Jared Cunningham, Bernard James, Shawn Marion, and Dirk Nowitzki under contract heading into the 2013-14 season.

The roster rebuilding began in the NBA Draft with the Mavericks selecting 13th. After trading down twice, Dallas received the rights to Shane Larkin, who was drafted by the Atlanta Hawks, with Cunningham going to Atlanta in the trade. In the second round, the Mavs selected Ricky Ledo with the 43rd pick.

Once the league moratorium on signing was lifted and the Dwight Howard pursuit was over, the team began adding players in earnest. Shooting guard Wayne Ellington was the first to sign with the team. From there, the Mavs added point guards Jose Calderon, (rumored to be a Dallas target last season) and Gal Mekel, who is coming off an Israeli Super League championship with Maccabi Haifa and a league MVP award. Devin Harris was also slated to rejoin the team that drafted him as the two sides reached an agreement to a three-year deal, which was later voided and restructured as a one-year deal due to injury.

With the two draft picks and the signings of Calderon, Ellington, Harris, and Mekel, the Mavericks were doing everything in their power to shore up the haphazard play that marred the backcourt last season. Hell, Dallas now had seven guards if you include swingman Vince Carter. It may have seemed excessive, perhaps even David Kahn-ian, but Mike James was a starter last season, for God's sake! Yet, they weren't done signing guards. There was one more piece to add and it was the signing that set the internet ablaze the most. Seemingly out of nowhere, Dallas acquired free agent Monta Ellis. Certainly, with this signing, the Mavs have it all.

The final moves that the Mavericks made were to their frontcourt. They signed veteran Samuel Dalembert and DeJuan Blair after he fell out of favor in San Antonio. Eventually, the team got around to re-signing the underrated Brandan Wright, which brought the roster to 15.

2. What are the team's biggest strengths?

More: All of SB Nation's NBA previews to date

But, no, in all seriousness, Dallas finds itself in a much better situation this season than last. The backcourt should be a strength coming into the season with the number of guards on the roster. Calderon is a pure point guard who favors setting up his teammates rather than operating independently and looking for his own shot. This somewhat cautious offensive demeanor, combined with the ability to knock down shots at a high percentage, should bode well in Rick Carlisle's system. His main task will be to get the ball to Nowitzki and work pick-and-rolls with him. By contrast, last season, the backcourt would look the other direction often and rotate the offense away from Dallas' all-time leading scorer.

Hopefully, Calderon should also be able to rein in the never-gun-shy mentality of Ellis, who is a potent scoring threat. Too often teams focused their defensive efforts squarely on Nowitzki, challenging other players (Marion, for example), to beat them. Slacking off Ellis is simply not an option. He may not shoot the highest percentage but he does have the ability to get to the rim and certainly isn't timid when it comes to taking a shot.

Harris, once he heals, has the ability to play both guard positions which diversifies his role with the team. It's too early to guess what Carlisle's rotations will look like, as he is a notorious tinkerer; however, it stands to reason that Harris will play a major role with his ability to play both sides of the ball.

The biggest strength for the coming season is a healthy Nowitzki. Dallas suffered dramatically last season with the focal point of the offense sidelined for 30 games. His return, though shaky at first, allowed the team to reach a point where they were in the conversation to make the playoffs and eventually finish the season with a .500 record. A healthy Dirk is the most important asset the Mavericks have.

3. What are the team's biggest weaknesses?

While the offense looks as though it could be on par with previous Mavs teams, though maybe not as potent or as wild as Don Nelson's squads, it will take time for these players to mesh. Not only that but Dallas looks lackluster, on paper at least, when it comes to defense. Good defenses rely heavily on the ability of players to clearly communicate with one another and know when and how their teammates will react in a given situation. This is not to say that the Mavs do not have the potential to be decent defensively. It is just going to take a concerted effort from all parties.

Calderon, though offensively adept, is notoriously lead-footed on defense. Nowitzki, too, is not known for his defense. He has, however, almost perfected his swipe-at-the-ball-as-the-offensive-player-drives-the-lane move. As for Ellis, he gets steals but is too eager to jump into passing lanes and ends up out of position. It is very conceivable that oppentents will work their way into the paint often against the Mavericks. When they do, hopefully Brandan Wright is not there to greet them. Dalembert was brought in for just this reason.

Though he has lost a step, Dalembert is still a capable defensive player especially coming from the weak side. Wright has certainly improved his off-ball and weak side defense but his simply does not have the girth to battle in the post against the lager centers in the league. Where Blair and James fit into paint protection is anyone's guess. Carlisle will likely not fall in love with any particular platoon rotation and each will get time on the floor and in the doghouse.

Dallas does have a few capable defenders, though. Marion has continually accepted the task of defending multiple positions. Crowder was called upon last year to defend some of the league's better players, like Kobe Bryant, and Carter is able to play solid defense for stretches. The Mavericks won't be a complete sieve defensively. Overall though, this team will certainly have issues on the defensive end. Their best defense will be their offense.

4. What are the goals for this team?

Last season was the first time during the Mark Cuban era that the team failed to make the playoffs. Returning to postseason play will be one of the primary goals for Dallas. The Mavericks, though, are generally believed to be a team on the outside looking in where the playoffs are concerned. More than likely, Dallas will be playing for one of the final playoff spots in the West along with the Lakers, Timberwolves, and Trail Blazers. Nonetheless, all the talk coming from the players and coaches centers on returning to the postseason.

5. How will new general manager Gersson Rosas shape the roster?

It's not only the players that are the new faces in town. The Mavericks hired a new general manager, Gersson Rosas, this summer. Rosas replaces Donnie Nelson, who was the defacto GM since 2005. Nelson remains the president of basketball operations.

Rosas worked closely with Houston Rockets' GM Daryl Morey in construction a roster founded on the principals of sabermetrics. This hiring reaffirms the Mavericks' analytical approach to the game. Dallas has long been a team that has relied heavily on free agency rather than developing young talent. Houston, on the other hand, has found a steady median. What will be interesting to see is how Rosas evaluates the Mavericks roster, not just this season, but for many seasons to come.