We've reached Wayne Ellington in our season previews and let me tell you, I'm probably way too excited for him to play.

At 6'5" and weighing around 200, he immediately fits the prototypical 3-and-D mold. The Mavericks are his fourth team in three years, but no fault of his own. Financial situations forced Memphis to trade him away and Cleveland's buys roster just wasn't as inviting this offseason. Take a look at his shot chart last season and it's already easy to like the guy. 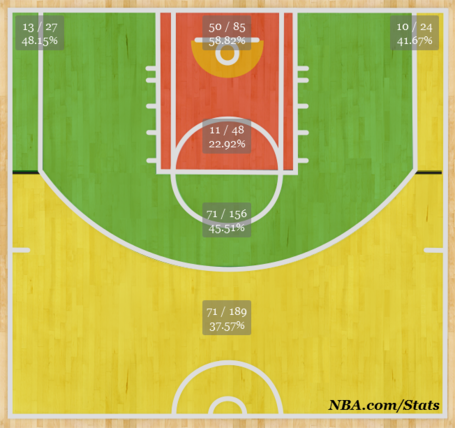 He shot 44.2% combined from the corners and, as you can see, also kept a pretty high percentage above the break. He excelled in particular from the right wing -- although the chart doesn't show it, he made just about 44% of his shots there.

To put it in more advanced terms, here's a breakdown per MySynergySports. Last season, Ellington nailed 54/119 (45.4%) of his spot up three pointers and 7/17 (41%) of his transition attempts. His main shooting weakness is running off of screens, only managing to shoot only 5/22 (22.7%) doing so.

But there might be more to him than just three point shooting, as the green mid-range in his shot chat indicates.

"My best trait is long-range shooting," he said to Eddie Sefko this preseason. "I try to mix it up. I have the reputation as a shooter, so I get a lot of people running at me. So now you've got to be able to go to other things, take one or two dribbles, pull up. Take one or two dribbles and get in the lane to create."

Of course he's going to say that, but the stats back him up. He shot 47% on two pointers as a PnR ball handler -- taking one or two dribbles and pulling up. I figured it was just the reputation of Zach Randolph and Marc Gasol setting the picks, but most of the attempts actually came in Cleveland.

Take a look at his stats with the Cavaliers, in fact. Notice anything?

In those 38 games, Ellington played the most minutes per game at 25 and also averaged over 10 points per game.

What does this say? Dallas is Cleveland and Ellington won't get those same minutes or opportunities, but don't be surprised at his ability to step inside the line. Of course, if his shot chart is any indication, let's hope he stops to pull-up before he actually reaches the paint.

His defense was a bit trickier because it's harder to just combine last year's stats stretched between the two teams. To make it easier, I'm going to reference his 2011-12 season. In his final year with the Timberwolves, the team allowed 1.9 fewer points per 100 possessions when he was on the court. He allowed a 13.8 PER to opposing SG's and a 9.8 PER to opposing SF's -- although the latter may not be too small a sample size to accurate depict anything.

Although there's nothing impressive about his peripherals -- 0.4 steals per game and 0.1 blocks per game for his career -- it's safe to say that Ellington is generally a positive while on the floor defensively.

Now the exciting part -- how does he fit?

Monta Ellis is the only other true shooting guard on the roster (Ricky Ledo notwithstanding), but Vince Carter and Devin Harris, when healthy, look to factor in.

But Ellington is the best shooter out of all four, at least percentage wise (because everybody knows Vince is going to take a crazy shot here and there), and the Mavericks badly need players on the floor that don't kill them defensively. I see a role for Mr. Wayne this coming season.

Especially until Harris gets back, Ellington should get plenty of opportunities to stretch the floor and even given a chance to create some offense or run a pick and roll here and there. It's up to him to #makeitwayne, but with a hashtag that cool, how hard can it be?