In which the biggest Devin Harris fan on the blogging circuit talks about the impact Devin Harris will have next season. Expect bias.

The prodigal son has returned to Dallas. Kind of. Actually, not really, the analogy doesn't work particularly well in this context.

Whatever, DEVIN HARRIS IS BACK, BABY, AND I'M EXCITED! ARE YOU EXCITED? YOU SHOULD BE EXCITED!

Devin is essentially a minor panacea for the Mavericks' particular ills; while he certainly won't single-handedly fix all of their problems, he is good at almost every one of the things that this squad isn't great at. I've written about what makes Harris so valuable to this particular Mavericks squad before, so I'll try not to belabor too many of those points again. It's worth repeating, though, that upon his return from his toe surgery he can be a huge stopgap off the bench to fix many of the problems (both offensively and defensively) that the Mavericks are sure to have.

But don't just take my word for it! I asked Hawks.com lead writer and former editor of SB Nation's Peachtree Hoops, Robby Kalland, to weigh in on what he thought of Devin Harris' performance with the Hawks last season. Robby was pretty positive about Harris' impact and had some very good insights on Harris' possible impact off the court, as well as on:

Devin was a great guy in Atlanta. When he was healthy (which was about half the season) he was an asset on the court providing a second ball-handler on the floor with Jeff Teague or Lou Williams alongside him in the back-court, and he was vital to the Hawks maintaining their playoff position when Lou tore his ACL. Off the court, Devin was a great guy to have in the locker room. He provided some veteran leadership to a fairly young back-court and I think he really helped in the development of Jeff Teague and John Jenkins. He would work after games on the practice court with Jenkins playing him 1-on-1 to help John improve his defense. I think he'll be a great guy to have around, especially for the young guys. I know he's hurt, but Shane Larkin should learn a lot just being around Harris and I think that will really help him in the long run in becoming a better point guard.

The possibility of Devin positively impacting the new young guards hadn't even occurred to me until I sought out Robby's input. Man, DH, when will you stop giving me reasons to love you?

So, what is Harris so good at that the Mavericks aren't? What, exactly, does he fix?

First, and most importantly: defense.

The Jose Calderon - Monta Ellis backcourt is going to be a sieve. Ellis might certainly be better defensively than I've given him credit for, given his preseason performance, but he's still bad, and the Mavericks are almost guaranteed to allow a lot of shots in the paint next season.

Devin Harris is, by most accounts, not a lockdown defender. He isn't going to change the entire flow of the opponent's offense. He is, though, pretty good, which is a huge upgrade over the Caldy/Have-it-All duo.

Per Synergy Sports, Harris only allowed 87 points per 100 possessions defensively last season, a very good personal mark . Similarly, per 82games.com, Harris held all opponents to an average PER (player efficiency rating, a comprehensive stat of player performance) of 13.35, well below average, and an eFG% (effective field goal percentage, a comprehensive shooting stat) below 50%, which is also pretty decidedly below average.

Meanwhile, while Harris was on the floor, last season's Hawks defended at a rate of 97.9 points allowed per 100 possessions, which was a whole 4 points better than the team average. Harris was also the biggest net positive on the team in points per possession for the course of the season.

And yet, when you watch Harris, his defense seems much slower than it used to be, thanks to his slew of foot injuries, and he has a really hard time dealing with screens. Let's look at an instance of Harris getting totally burned on a fake screen and a cut from DJ Augustin: 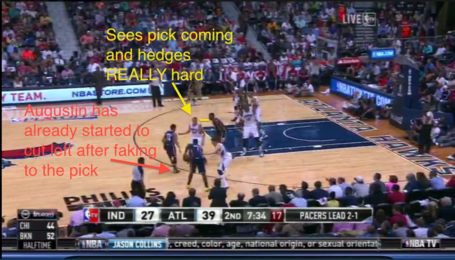 You can see how Augustin is already starting to cut left, away from the ball, while Harris is just starting to hedge right over the pick that he thinks is coming from Ian Mahinmi. Young, in-his-prime Harris was quick enough to compensate for biting on the fake, though. 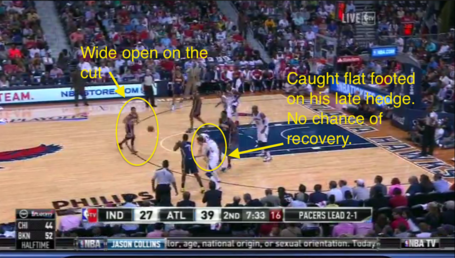 Older, several-foot-injuries-later Harris is not quick enough to compensate and gets killed when he hedges the pick too hard.

Harris is really prone to extremely hard hedges into the pick, and he's slow to recover, so what exactly makes Harris a good defender? Remember, he's not lockdown, so the lack of lateral quickness and his difficulty around screens certainly kills him from time to time. Backscreens lead to way too many easy layups on cuts when Harris is involved in the play, and he gets blown by by younger players more often than he should.

All of that said, there's a reason he works against picks so hard, and there's some positivity to be had from it. Let's look at this pick and roll that Harris is involved in with Roy Hibbert and Lance Stevenson: 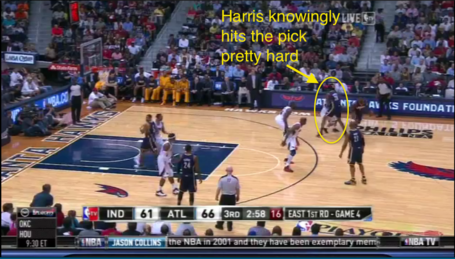 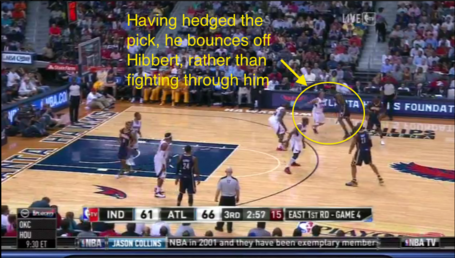 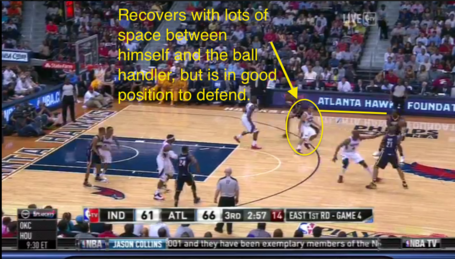 This play demonstrates the essence of what Harris is good at on defense. He's never had a huge defensive IQ, and he's lost a lot of lateral quickness with age. In lieu of those things, Harris has adopted a strategy of pick and roll defense that concedes a lot of space between himself and and the ball handler, but that also keeps him in front of his man.

For this reason, Harris is a very good defender at the rim. When teams run pick and rolls, Harris might concede a mid-range jumpshot, but he usually recovers so that he's between the man and the basket by the time his man gets to the paint. He's almost always back to his cover in time to contest shots in the key.

The flip side of this, though, is that Harris allows pretty unfortunate 3-point percentages while he's on the court, since he concedes so much space. Spot up shooters shoot 44% from 3 when he's defending them. Pick and Roll ball handlers shoot 35% from 3 off the dribble. His marks shoot 40% from 3 overall. His percentages allowed in the paint are fantastic, but he gives up way too many perimeter buckets.

Plus, as I mentioned earlier, he has a hard time keeping up with faster players on drives. So how does he manage to contest those shots, if he's getting blown by in the beginning of the play?

This instinct for getting pilfers is crucial to salvaging possessions in which Harris has already lost his man, as in this play with George Hill: 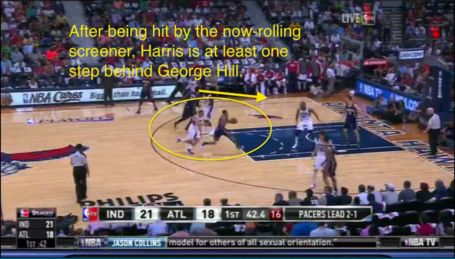 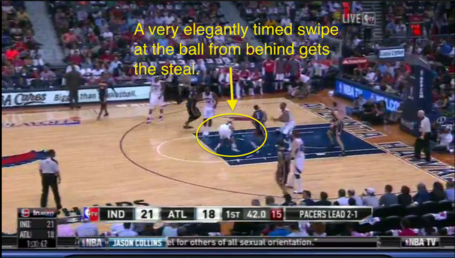 All of that said, Robby Kalland was quick to remind me that while Harris is good at D, and much better than Monta or Jose, we should be careful to temper expectations:

Devin was a solid defender but I don't think you should get your hopes up that he'll be a savior to a porous defense. As he's aged he's lost some of his lateral quickness especially due to his chronic foot injuries. He makes up for some of that lost quickness by being well-prepared and positioning himself well. He can't keep up with the extremely fast PG's one-on-one all game, but he does a pretty good job.

The part that I'm willing to get excited about, though, is how good Harris is at defending in the paint. Really, Monta and Jose can defend on the perimeter fairly well. Monta is, laterally, very quick, and Jose has a good understanding of angles. If inserting Devin Harris into the lineup can reduce the number of easy shots at the rim (or, at least, mitigate the damage inside), then he's a massive plus to a backcourt that probably will have a hard time stopping even lackadaisical drives inside.

On offense, Harris' impact will be less marked. Harris is very good at scoring near the rim, and he's a pretty good three-point shooter when spotting up or shooting when curling off of screens. When he's being smart, he'll space the floor quite a bit, which could be an invaluable extra bit of space in the right context. Harris, like Monta, has some pretty unfortunate and frustrating tendencies with pull up jumpers, though. When I asked Robby about his shooting, he was quick to point that out to me:

I liked Devin shooting when it was in the flow of the offense and the ball got swung around the floor and he ended up with it with an open set shot. He has a propensity to pull-up in semi-transition and early in the shot clock, especially if he feels he has the "hot-hand" and that will drive you nuts. Nothing kills an offense's flow faster than quick, contested three-pointers. If he is shooting in the flow of the offense (which is usually the case for those corner three looks) then you're very happy. If he's pulling up off the dribble a lot, you'll be holding your head and feeling a little nauseous.

Nonetheless, Harris could play a crucial role on offense: he's a very solid secondary ball handler. Adding Harris in alongside Calderon will allow Jose to play more to his strengths: distributing and setting up the offense. With Caldy on the floor, Harris can be a great 3rd option as a cutter or corner 3 specialist.

With Monta, Harris' skill as an off ball player can allow Monta to be more ball-dominant, where he's proven to be most comfortable and talented. As well, having that extra flexibility with Harris in the lineup will mean that Calderon and Ellis don't have to spend as much time together, which could maximize each player's offensive talents while mitigating their defensive deficiencies.

Harris can help, then, on offense, even if he won't be the stopgap that he could be on defense.

The big question left with Harris is that toe injury. Most projections have him coming back in late December or early January. In that case, Harris may never see a ton of playing time, since by the time Harris gets back the Mavs should have a pretty comfortable rotation. Harris will certainly get burn, and he could be essential if this team manages to get a postseason run, but he probably won't be the sixth man that he could be otherwise, since he's returning 20-30 games in.

Nonetheless, whenever he returns, Harris returns to the Mavs hoping to make a big 50-game impact on a team that could really use his particular skill set.

So guys, break out the smokers, and let's prepare the fatted calf! Or...something. Welcome home, Devin.