We all know who Marion is and what he brings, but is he maybe declining faster than we think?

Shawn Marion, The Matrix, has quietly been a Mavs fan favorite for several years now -- dating back to basically when he joined the team in 09-10. Marion has never really approached his peak production from the 7 seconds or less era Suns, but he has given the Mavericks a surprisingly good facsimile of that performance over the last four years, and it's served Dallas well.

While he's flown under the radar of most other fan bases, Marion remains well appreciated for his talent in Dallas, where he's recognized for his still-pretty-impresssive defense, his ability to do whatever is needed on offense, his astounding capacity for gobbling up rebounds, and that absolutely, completely, unbelievably bonkers shot form.

No. Seriously. What the hell?

Side Note: CAN WE PLEASE HAVE NASH BACK?

But in all seriousness, the Matrix has given the Mavs something that they've always desperately needed: an anchor other than Dirk. Marion has given the Mavs a fantastic defender to center the defense around (though he's been slipping more from his prime than people like to admit on that end), he's given them a jack of all trades to pick up whatever slack whenever it's needed, and he's given them a grizzled vet in the locker room who can look rookies in the eyes and say, honestly, "I've seen things boy. Things you can't even imagine." It's probably a good learning experience for the young'uns.

It's hard not to appreciate that guy: the guy who gives you a little bit of everything, and does it well.

Here's his career per game stats:

Here's the thing, though: he's declining, and he's declining at a faster rate than a lot of people are willing to admit. On the one hand, he scored a solid 12.3 points per game last year, with another decent 14 points per 36 minutes. He did it efficiently, too, as he logged a pretty solid 55.3% True Shooting Percentage (which is just FG% adjusted for FT% and 3Pt%).

The problem, though, is that the Mavs were consistently worse than their opponents when he was on the court. I'm, sadly, serious.

That is the lowest net negative on the team, below O.J. Mayo and Darren Collison.

Here's the bright side: the real reason for that net negative is that Marion played the most minutes (other than Mayo, who was averaging 18 points on almost 60% TS%) during last season's losing streak before Dirk's return, which is going to guarantee a negative team impact. It also helps explain how Collison and Mayo are the second worst, while even Mike James had a positive.

Marion isn't bad for the team per se. Per 82games.com, he held opponents to an average PER and scoring rate per 48 minutes, defensively, in the two most highly concentrated positions in the league. Meanwhile, his own PER was pretty comfortably above average, especially from PF, where he actually spent the most time last season. Marion was a problem for other players, and he was useful in and of himself. In that sense, Marion is a big asset.

While he's not bad for the team, though, those stats are emblematic of something concerning: the Mavericks don't score well while Marion plays. The 101.2 points scored per 100 possessions is concerning. Marion, by himself, is not going to be able to dramatically improve the Maverick's porous defense, but he can hurt their offense.

Let's take a minute to look at his shot chart from last season: 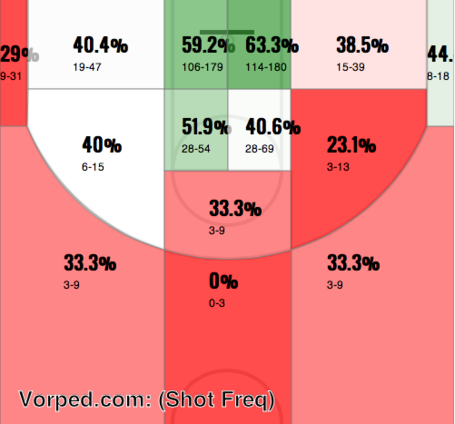 Marion is very, very good at the rim, still, and he's well above average from the "dead zone" in the paint where lots of other players have issues.

The problem, though, is that left corner 3. Over the course of the season, Marion shot 31 threes from the left corner, which is almost twice as much as he shot from any other 3 point zone. The Mavs ran several sets that parked Marion in the left corner with the ball and a scrambled defense. Ideally, Marion would take advantage of the defense's confusion and drive to the basket, but against better defenses, he would often find himself open and shoot.

Marion only shot 29% from the easiest 3-pointer on the court, and the one that he took most often. That's the problem.

With Marion on the floor, the Mavericks' spacing is really cramped. Marion can score, but when defenses collapse and sag off of him, a lot of the other players have more trouble. That's why, to an extent, the Mavs do better when Vince plays at the wing: he's a very, very good 3-point shooter, faults aside.

On the other hand, Marion's wing defense is going to be even more valuable next year, even if he is only "above average" next to what has to be a defensive sieve of Calderon and Ellis. Having Marion on the floor could be the difference between someone like James Harden scoring 30 instead of 40. Not to mention that Marion is an elite rebounder for his position, and that he led the team in rebounds per game last season. With Dalembert, Dirk, and Wright as the Mavericks' default big rotation, they'll need that rebounding presence desperately.

So, Marion represents a hard-to-reconcile Catch-22. The Mavs' defense is almost untenably bad with him on the bench, but the defense is going to be bad whether or not he's playing, it'll just be bad by differing degrees. On the other hand, the offense struggles pretty badly when he is playing. So...what do you do?

Expect this to be the conundrum that Carlisle tries to chip at over the course of the season, then.

One thing we'll probably see more of, as a result, is Marion playing PF in bench units. With a shooting backcourt (Caldy-Ellington-Vince, maybe?), Marion's lack of shooting will do far less harm to the team, and his post defense remains very solid as he ages, mostly due to his impressive wingspan.

Maybe we should also expect some lineups next season with Marion at PF and Dirk at C. These lineups aren't likely to be too manageable defensively, since having Dirk as the primary rim defender is never a good idea, but it does solve a few problems -- and as a result -- it might be reasonable in really limited minutes. With Marion at the 4, the shooting woes are mitigated a lot, and keeping Dirk at the 5 clears up a lot of the issues that the Mavericks will be seeing with the Center rotation.

Otherwise, Marion will continue to be the guy he's always been: a glue guy, who's there to give you the cure to what ails you. He might, though, continue a process of becoming someone else -- someone we're less accustomed to seeing: a strange paradox of a player who simultaneously creates and solves a lot of the team's problems.