What's REALLY the story behind this picture?

Share All sharing options for: Fan Fiction Friday: The Smell of Success

Two super exciting FFF notes. One, this week is an experimental week, based on a suggestion by our esteemed colleague at the home office, Mike Prada, and seconded by the Hawks' own Robby Kalland, to, more or less, caption the picture below.

The second note is that my effort at fulfilling this assignment struck my esteemed girlfriend as so gross that she would not let it stand but composed her own rival fan fiction Friday to bring the touch of urbanity to the proceedings that sophisticated Mavs fans like yourselves deserve. Below, you will find both efforts, mine, and a voice crying in the desert, Robyn's effort, shouting "your audience deserves better than your gross, high school boy's effort". We begin: 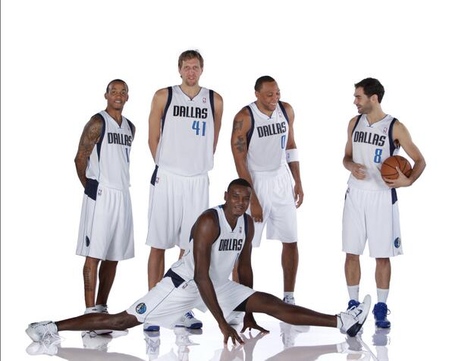 Photographer: "No, come on, this is a ‘projected starting five' picture. You want this one to be good, trust me."

Dalembert: "A silly one! Great. I can do the splits!"

Dirk: "Guys, we gotta be serious. Something to send home to mom, you know?"

Marion: "Oh my god, Dirk, did you just fart? This is horrible, I think I'm going to die."

Monta: "Monta have it all, even olfactory resistance to farts."

*Dalembert starts getting down into the splits, no one notices*

Monta: "Monta is ready for his closeup."

Jose: "Dude, what the hell! You must have like, literally eaten something that smelled like farts, and then farted so it was twice as potent as a normal fart. Stop the shoot, we need gas masks".

Marion: "How bout instead we say something that doesn't involve breathing, ever again?"

Dalembert: "Hey guys....Could somebody like...push on my back a little bit?"

Jose: "Take the picture! This is the worst smell I've ever been associated with in my life. I'm going to spend the rest of the day showering."

Monta: "Oh, yeah. Monta looked amazing in that one."

Photographer: Normally I'd resign myself to the tedious job of finding individual photos of you and digitally cobbling them together into a single image that falsely implies you were together when this picture was shot. But I have an idea. Why don't we try something experimental?

Jose Calderon: Do you mean like how the Spanish government recently announced further experiments in austerity, despite the ongoing thirty percent unemployment rate where I'm from, in the Extremadura region?

Photographer: Well... wow. Thirty percent? I mean... yes? Sort of? In the sense that it also involves, umm, difficult decisions? So what I want you to each do is stand near each other, but pretend you're being photographed individually. I mean just literally have nothing in common. Do things that make no sense for humans sharing an experience to do.

Dirk Nowitzki: That's sort of my jam. I try to be nice about it, but there aren't very many people who share my experience of reality.

Photographer: You mean in sheer terms of the laws of physics? Like those things you do with your spine, which, relative to the flat plane of the floor, make us all wanna use protractors again?

Dirk: No, I mean... I just feel so awkward. Clumsy, you know? I'm always bumping into things. I'll just put my hands behind my back and try to stay out of the way, unobtrusive-like.

Photographer: Oh, Dirk... You are breaking my heart. (She pauses a beat.) What I was hoping, was, you would all think of something important to you. Not just basketball, but like, your lives. Focus on it. Try to use your body to convey it.

She raises her camera. The players assemble into an array of improbably related positions.

Sam... Sam is that even humanly... what are you doing?

Samuel Dalembert: The splits, madame. I am doing the splits. I do them to represent the ways in which my soul is split among parts. A part in Haiti, the part of my heart which bleeds for those of my friends and family whom I have lost. A part in Canada, where I am a citizen and welcomed as at home. A part in Philly, where I moved my brother and sister to get them a better life. A part in Texas, where I...

Dalembert: Feel newly loved by all the friendly people! What did you think I was going to say?

Photographer: Oh, nothing. Texans are renowned for their friendly treatment of guest workers and immigrants.

Dalembert laughs-he's not that kind of immigrant-as she snaps a few shots.

What are you thinking about, Shawn?

Shawn Marion: The ground beneath my feet.

Photographer: Sure. I believe it. But why?

Marion: It's the only thing I trust. I spend my time defending and rebounding-not just on the court, though there, too, of course-but looking out for single mothers, for strong ladies like my mother and sisters. But I wonder... who will defend me? Who will protect me? My stylishly debonair façade belies my wary heart.

Photographer: That makes sense, what with your being so rich and handsome. Hey, do you want to meet for drinks after-

Marion: You. You are the demon dog snapping at my door. When I look at the ground and contemplate trust, I am thinking of you.

He looks back down.

Photographer: Hungry? But I thought Monta-

Ellis: Got it all. Well, strictly speaking, others have many things that I do not. One of the all things which I have got is that I graduated from the same high school where the great novelist Richard Wright-who wrote Black Boy and Native Son-got his last formal education, in Jackson, Mississippi.

Photographer: Is that on your Wikipedia page? That's as much research as I did.

Ellis: Wright once wrote that he would "would hurl words into this darkness and wait for an echo, and if an echo sounded, no matter how faintly, would send other words to tell, to march, to fight, to create a sense of hunger for life that gnaws in us all." So let's feed that echo. Let's stay hungry. I am hungry. I am ready to march.

Calderon: Well said, Monta. I am with you; my right hand is on my stomach, in solidarity with the hungry. I face west, for Europe, the land of the evening sun-for America, for Texas, for all the great Wests. And my left hand clutches this basketball, in gratitude for our gifts that feed our hunger even as they keep it at bay.

Photographer: OK. Well. Mission accomplished. Your poses are just... absurdly awkward with respect to one another. No one would ever professionally curate this photograph, and that is my Art. So. Say cheese!

Ellis: More like cut the cheese! Am I right?

Marion: Dude, did you just tell a fart joke?

Photographer: Could you all just awkwardly smile? Please?

They smile. She snaps the camera one last time.