A Film Breakdown: Where Monta Thrives

Monta's tendency to do well or not well, so far, has less to do with him becoming "Old Monta" for stretches of time as it does the defense that's played on him.

Share All sharing options for: A Film Breakdown: Where Monta Thrives

One of the more incessantly frustrating narratives that have arisen so far in this early season has been the "Monta has been playing wonderful basketball to start the season, but will he regress to his old self soon?" Both times that Monta has had a bad game this year, everyone has screamed "IT'S OLD MONTA ALL OVER AGAIN," and it's driving me nuts for a couple of reasons.

First -- and this isn't something I'm going to go into in any significant capacity because I already have before and it's not relevant to this discussion -- is that saying that "Old Monta" is coming out any time he does anything bad on the basketball court is associating his basketball performance with his identity as a person which seems problematic to me in a number of really eyebrow-raising ways.

But second: every NBA player has bad basketball games. Most have had some already, early in this young season. Having a few bad games does not mean that Monta is regressing into bad habits. And, for the most part, those bad habits that he was so lambasted for last season (bad shot selection, shooting too much, never not shooting the ball) have not been his problem so far this season (turnovers on turnovers on turnovers).

Perhaps most frustrating to me, however, is that I don't think that we're even seeing a "New" Monta at all. We spent a large part of the offseason, after Monta was signed, debating whether or not Monta would fit more functionally with this new Mavericks squad than he did with last years' Bucks. The question presupposed that we understood that Monta wouldn't really change, but that his play might appear more dynamic when he's not the number 1 option. As it turns out, those who were supportive of the move were right (i.e. I was quite wrong), and Monta has been much more comfortable in a squad where he is simply another piece.

So why, all of a sudden, people seem to think that his improved performance is the result of "a whole new Monta" is beyond me. This isn't a whole new Monta, it's the one we've been seeing for 7 years now, but put into a context where his decision making process will lead to conclusions that are far less harmful for his team.

Our editor-in-chief Tim Cato has started a series breaking down the context for Monta's success or lack thereof. Because his success is entirely context based, and there's nothing wrong with that. This doesn't do any discredit to Monta, because regardless, he's been wonderful. If anything, this exposes the fact that he's really been very good for a long time, if he can keep this up.

Monta Ellis Vs the Shot Chart: Week One 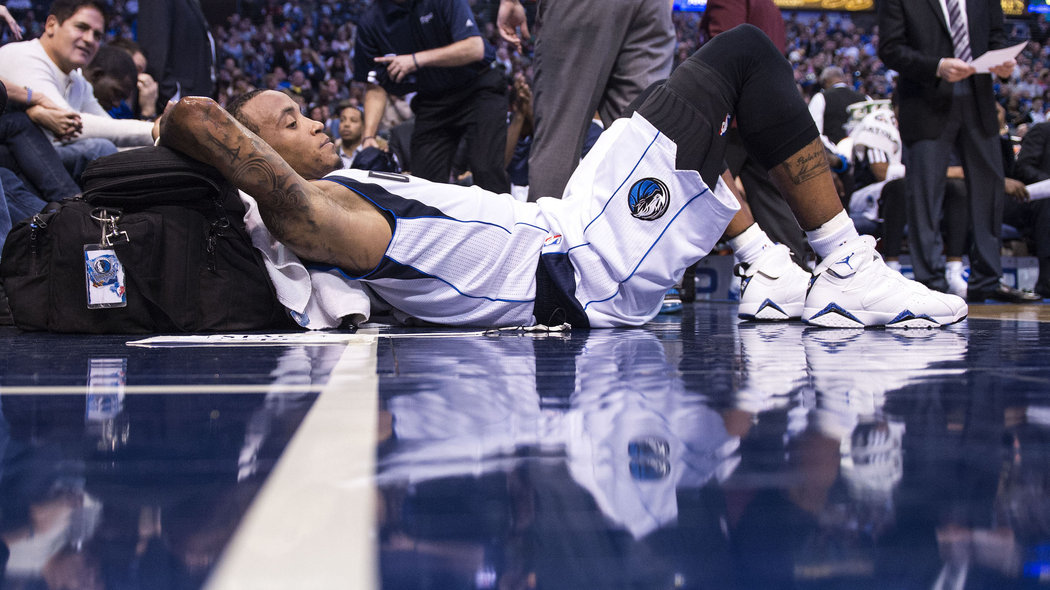 Tim Cato's wonderful series on Monta's development as a Maverick

So, with this article, I'm picking up a bit where Tim left off: there's been a distinct pattern to the defensive coverage against which Monta has been wonderful, and against which he's been less impressive. Monta has been able to use his speed and dynamic passing to take advantage of defensive coverage that plays on him tight, while defenses that leave him room are exposing Ellis' unreasonable adoration of the pull-up jumper.

Let's take a look at a team that did not defend Monta and the pick and roll properly: the Memphis Grizzlies.

The Grizzlies were playing some pretty strange defense in their game against the Mavericks: Marc Gasol's greatest strength as a defender is his ability to simultaneously shut off both the passing lane and the roll man's lane to the basket, and so the Grizzlies usually have Gasol drop back into the paint in the pick and roll to maximize his strengths. However, in that Mavericks game, the Grizzlies were playing Monta very tightly on the pick and roll, which is the kind of thing that Monta is an expert at exploiting.

Monta is amazing at beating pick and roll defenders in these kinds of scenarios. Look at all the defenders here starting to list off of their targets to defend Monta charging down the lane. Monta gets an easy layup here, because he's very, very fast, but if Conley were to list a little farther off, Calderon would get an open 3 pointer. Or, if Z-Bo helped up to cut of Ellis' drive, he could make an easy dump off to Dalembert. There are a lot of potential options here, all of which are very good.

I mean, look at this:

Holy crap, that is a beautiful looking floor. All of it is entirely the result of Memphis playing close on Monta so he can, essentially, just outrun two out of position defenders.

In some ways, that jumper isn't always a bad shot. He shoots 44% from that range this year so far, but he only shoots well from the right side, for what it's worth. Still, 44% shooting on long midrange jumpers is, while better than average, still not good, especially if most of them are open. Those are opportunities that could be better spent driving to the hoop or finding moving players. It could do the whole team a lot of good to do a lot more moving around backscreens and such if they want Monta to not pull up here. Opposing teams could do themselves a favor by giving Monta lots of space, like this. This shot bricked BADLY.

It's easy to understand why teams wouldn't give Monta much space. If you look at the last frame, there, the only thing between Monta and the hoop is Dwight, who's playing up from the restricted area enough that Monta might be able to get off an uncontested reverse. But, what Houston realized and other teams haven't, is that if given an uncontested jumper, Monta will take it almost every time.

That's not necessarily a bad thing, though. Monta is still 2nd in the league in Team Points Created per Game, at 13.4, which is a very, very good number, despite his relatively low field goal percentage on drives. Plus, he's still going on a league-high number of drives per game at 11.4, so it's not like his decision making is horrible. Or, even bad. It's fairly good. But it can be bad when given the opportunity, just like every other player in the NBA.

The potential concern, really, is that other teams figure out Ellis' skills and deficiencies in the pick and roll are. Because Monta is not only good at driving past people on the pick and roll, but his ability to hit people with gorgeous assists is really astounding.

Look at this sequence from the Memphis game:

Ellis' proficiency with pocket passes really turns heads, but when other teams leave him a lot of space, they're taking away his ability to dish to open players, and instead are giving him several weapons to score with, except he often has a hard time making the correct decisions in those scenarios.

Check out this sequence that leads to a switch and Monta iso'd on Dwight Howard. It ends on a very bad jumper.

The trick is going to be making sure that Monta can still take advantage of teams when they leave him a lot of space on pick and rolls. Outside of that particular scenario, Ellis has been a killer, and given a lot of space. He should be driving down other team's throats.

I want to emphasize, again, that there's wayyy more to like about Monta's game than there is not to like. The "bad" scenarios only occur every few games, and only a few times in those games, so it's not like he's ruining anything with his decision making. The only concern is that in 20 games or more, teams will figure all of this out, and midrange jumpers will become the norm.

Hopefully, if that ever happens, Monta will figure out how to operate in midrange space, because really, that's almost all that he still needs to learn, offensively.