Week two of our power rankings show a lot of big moves up and down, with the Mavs staying pretty solidly in the middle.

Share All sharing options for: Ranking the Rankings, Week Two: Big moves as teams settle in

Week two of our averaged-out power rankings have arrived! If anyone missed last week's inaugural column, check it out here.

Or, for those who are lazy, here's the tl; dr version: we will be attempting to make a little sense of the various power rankings around the web each week by averaging them out, with a few notes on where the Mavs are or should be, for our fine community's dissection and discussion. 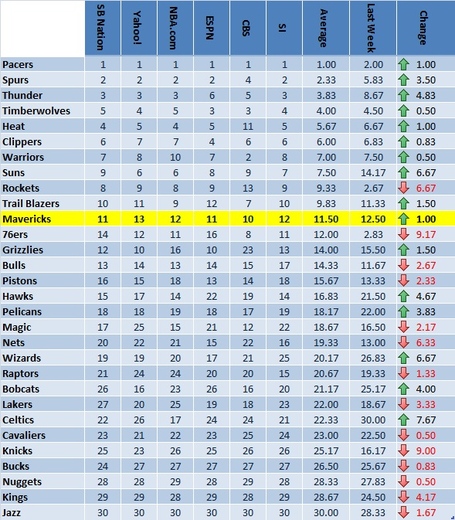 They know the reality: Success will mostly ride on the highs that Dirk-and-Monta-driven offense can generate.

Have to love what this team is giving you night to night right now, even going .500 last week. Rick Carlisle is doing his wizard thing again.